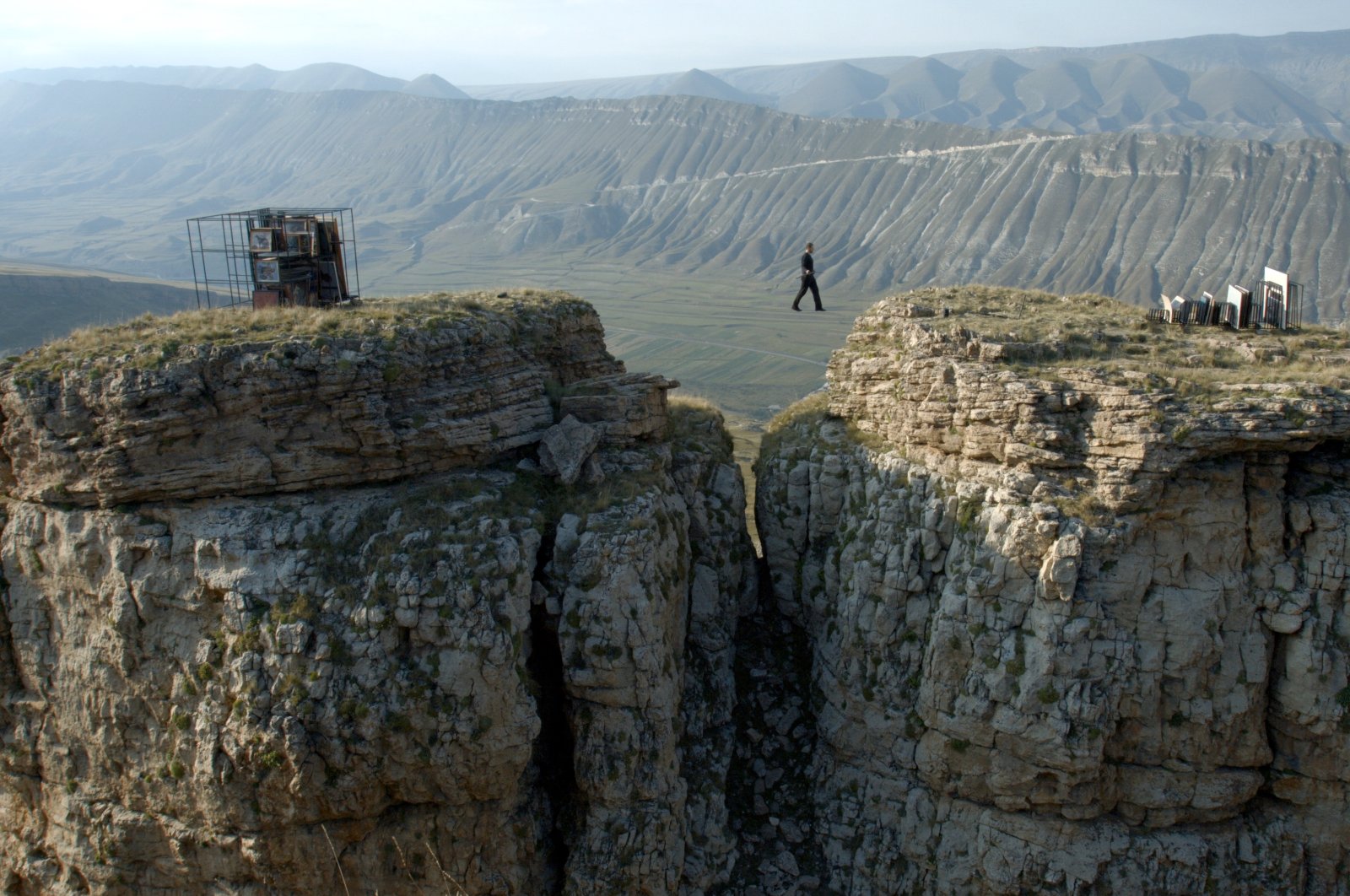 The seventh edition of Çanakkale Biennial will kick off with three main, spellbinding exhibits along with various other events revolving around the themes of collaboration, sharing and communication

The seventh Çanakkale Biennial, which focuses on intersecting and interacting relationships, collaborations, sharing and communication, is set to start on Sept. 19 with the title “Constellation.” Curated by Çanakkale Biennial Initiative (CABININ) and Azra Tüzünoğlu, the biennial will feature three main exhibitions with different setups as well as a program consisting of other exhibitions, film screenings, sound and fauna archives, panels and workshops. The events prepared as part of the biennial are based on a schedule that will be spread over six months.

Consisting of different venues such as art venue MAHAL, Korfmann Library, Kırmızı Konak (Red Mansion) in the city center of northwestern Çanakkale province and exhibitions to be held in the Troy region, "Constellation" will be both a metaphor for the communication network that CABININ aims to activate and make visible and a representation of interrelated and dynamic artists coming together. It will present a possible cluster of connections and an infinite variety of configurations drawn in the works on display.

Besides, this year's biennial program will be adapted to current pandemic conditions. There will be no inauguration ceremony, and private visitor groups will attend the prescreening events between Sept. 19 and 21. The exhibitions can be visited on the days and times specified in the program between Sept. 22 and Oct. 17 and can be viewed online starting from Oct. 19. The biennial will share its content on digital and online channels depending on pandemic developments and create the conditions for bringing art productions together with the audience and art lovers in different schedules and venues during the six-month period.

Constellations, from ancient times to the present, have helped define the positions of stars in the sky, separated from each other by imaginary borders. Mythologies have been derived from the characters to which each constellation is likened. Constellations, which are formed when a person looking into space from earth connects dots at various proximities and distances, have become a sign of a person's attempt to make sense of life and the universe. On the other hand, constellation, one of the concepts referenced in the field of cultural sociology, is defined as a point of pause in the movement of thought under the influence of a cluster saturated with tensions.

The constellation makes itself felt and comes into existence when one begins to think about the phenomena that occur at moments when different elements and positions are interrelated and intersected, and the potentials of these moments. In this respect, it also evokes the clustering of art productions with each other and with art history.

The exhibition "Constellation" on the other hand, refers to a group of related or similar people or things in everyday language. In this sense, it points out to the structure set for the seventh Çanakkale Biennial. It also describes the structural strategy of CABININ, consisting of contemporary art relations, collaborations as well as interdisciplinary interactions with disciplines such as architecture, archaeology, history and ecology.

The exhibition “What does it look like,” fictionalized by CABININ for “Constellation,” focuses on productions that address methods and forms of communication today, when the act of transferring information through direct dialogue between people is increasingly undermined with the dominance of visual culture. The exhibition, which will spread to different venues in the center of Çanakkale besides MAHAL, concentrates on the areas of intersection of communication and art with the contribution of international artists from different generations, as well as different experts and artists from Çanakkale.

“What does it look like?” explores the idea of thinking and producing on the expressive potentials of the symbolic language of art through the widest connotation power, focusing on our common heritage of icons, which are the means by which culture builds reality.

Tüzünoğlu's four-part exhibition titled “Damaged or Destroyed: Culture” features works by female artists. The first part, which focuses on the impermanence of the human body and the permanence of cultural beings, emphasizes “endangered culture.” Threats such as plagiarism made invisible by colonialism, women's labor made invisible by the patriarchy and art on the periphery made invisible by those who write the history of art come to the fore. The second part of the exhibition, titled “The World As We Know It,” marks the end of the world we know. The role of “observer,” through which we look at the time we live and its ruins, becomes visible in the dark and ironic works of artists. The third part of the exhibition, called “The Language of Advertising,” focuses on the work of artists who steal and transform the language of advertising. The fourth and final part contains a series of movements within Çanakkale. The exhibition will be accompanied by a project that aims to look at the daily urban life through “sound” and to record and archive urban sounds that can be considered intangible cultural heritage, as well as workshops, speech and walking programs that are aimed at developing researches, maps and routes about the fauna and architecture of Çanakkale.

‘Unwittingly But With Pleasure’

One of the components of the biennial titled “Constellation” will be a selection from the Agah Uğur Collection. The exhibition “Unwillingly But With Pleasure,” curated by CABININ with the suggestions and invitation of Tüzünoğlu, has been created with works selected from the collection which Agha Uğur defines with the motto “the journey itself is more important than arriving.”

Uğur's works, juxtaposed around the theme “game,” offers temporary and limited perfection with its own rhythm and harmony, in the imperfect world and the confusion of life. If the content of our actions is to be subjected to in-depth analysis, it can be concluded that the actions of all people are just a game. In this sense, the “game” is the desire to carry the weight of one's own life, despite knowing that life is absurd and the world is unfair. And the game is, above all, a voluntary act. The selection of Uğur's collection consists of works from Turkish contemporary art and international video art and post-2000 international video art.