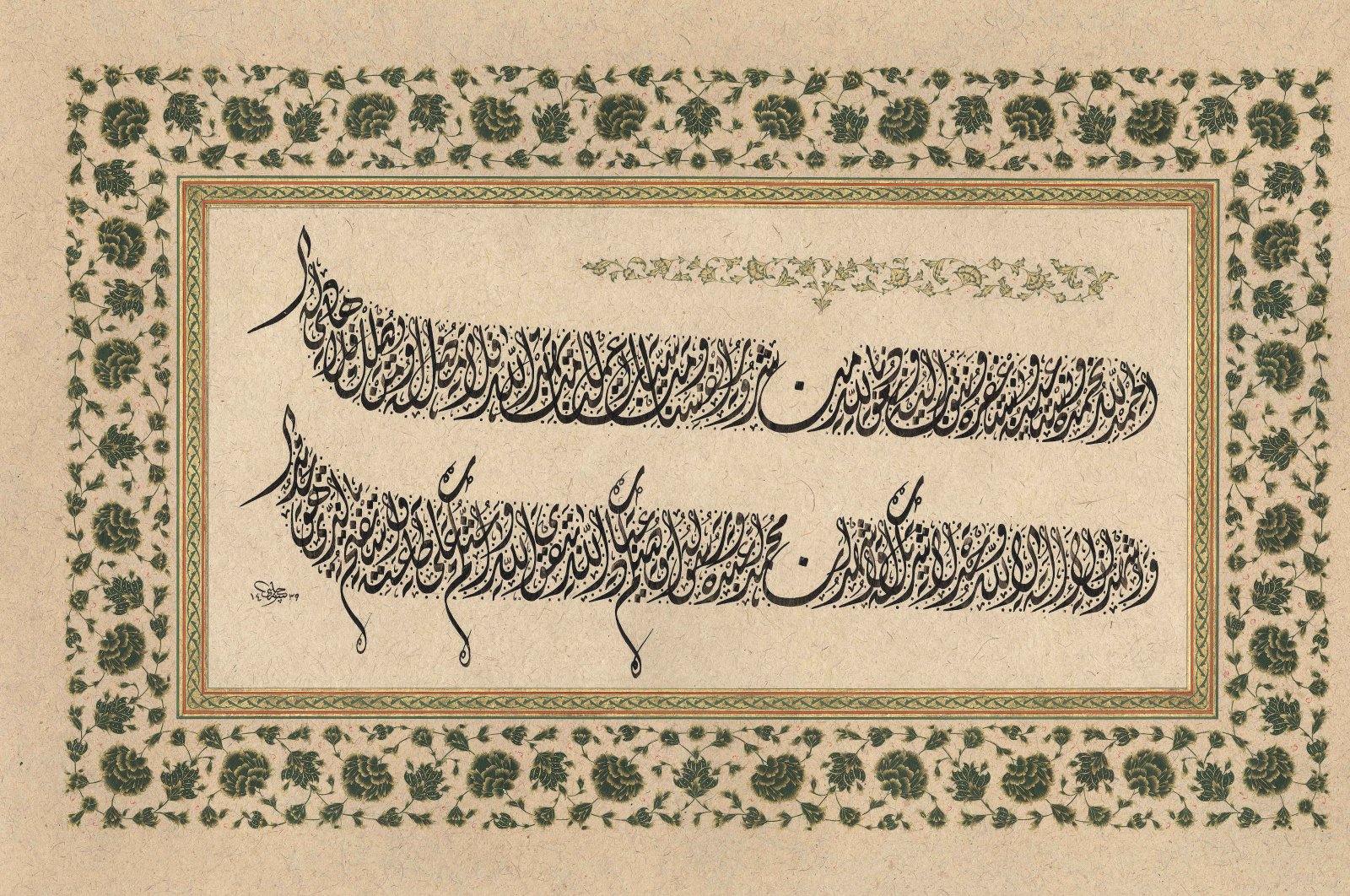 Hadiths from the Farewell Sermon, calligraphy by Hasan Çelebi, illumination by Nur Nevin, 46-by-72 centimeters, 2018.
by DAILY SABAH May 20, 2020 1:02 pm
Edited By Gabriela Garver
RECOMMENDED

Welcoming the month of Ramadan every year with traditional art exhibitions, Yıldız Holding has this year digitally opened the exhibition, “Prophet Muhammad’s Farewell Sermon,” an outstanding example of Turkey's National Cultural Foundation's (TMKV) calligraphy collection. The works consisting of texts that were selected from Prophet Muhammad’s Farewell Sermon and worked on by 37 calligraphers and 26 illuminators can be visited on a 360-degree virtual tour online. The exhibition can also be accessed via the social media accounts of Yıldız Holding and TMKV.

Yıldız Holding Chairman Ali Ülker said that they have offered a special collection to art lovers this year in accordance with the spiritual climate of the month of Ramadan, adding: “We care about bringing together both the contemporary artworks and the rarest examples of our traditional art that have left a mark on our social memory with our society, and we host valuable events in this area. We maintain this tradition with the ‘Calligraphy and Illumination Exhibition of the Prophet’s Farewell Sermons,’ which is one of the outstanding examples of TMKV's Calligraphy Collection during the month of Ramadan.”

Pointing out that they have moved the exhibition to digital media this year due to the COVID-19 outbreak, Ülker noted that the exhibition features works of calligraphy and illumination arts by distinguished artists. These caligraphies comprise of texts read out by Prophet Muhammad during the farewell hajj, pointing to universal human rights. “I believe that these works will help us better understand the Farewell Sermon, which could guide all humanity by rejecting race, color and class supremacy, and leaves an exemplary understanding of equality in history. On this occasion, I wish that Ramadan, the month of mercy, blessings and forgiveness, and the upcoming Ramdan Bayram (Eid al-Fitr) will be the beginning of healthy days when we will come together again,” Ülker said.

Professor Salih Tuğ, chairman of the Board of Trustees of TMKV, stated that the Farewell Sermon is one of the last speeches of Prophet Muhammad addressed to humanity and that these universal statements have been reflected in the arts of calligraphy and illumination in honor of the 50th anniversary of the foundation of TMKV.

According to Tuğ, it is of great importance that the 50 works of art that feature the Farewell Sermon and reflect it in the arts of calligraphy and illumination introduce this culture further both in Turkey and in the global art world and spread these holy statements. The texts in the works were translated into Turkish by assistant professor Halit Özkan, a master of hadith, in over a year with the use of the main texts of the Farewell Sermon, and they were then classified. In what kind of calligraphy these texts would be written, of what size and color they would be and which calligraphers and illuminators would work on them were decided under the guidance of professor Uğur Derman, professor Çiçek Derman and calligrapher Ali Toy. “The works have become a witness of the cultural values of this era with the participation of a significant number of calligraphers and illuminators,” Tuğ noted.