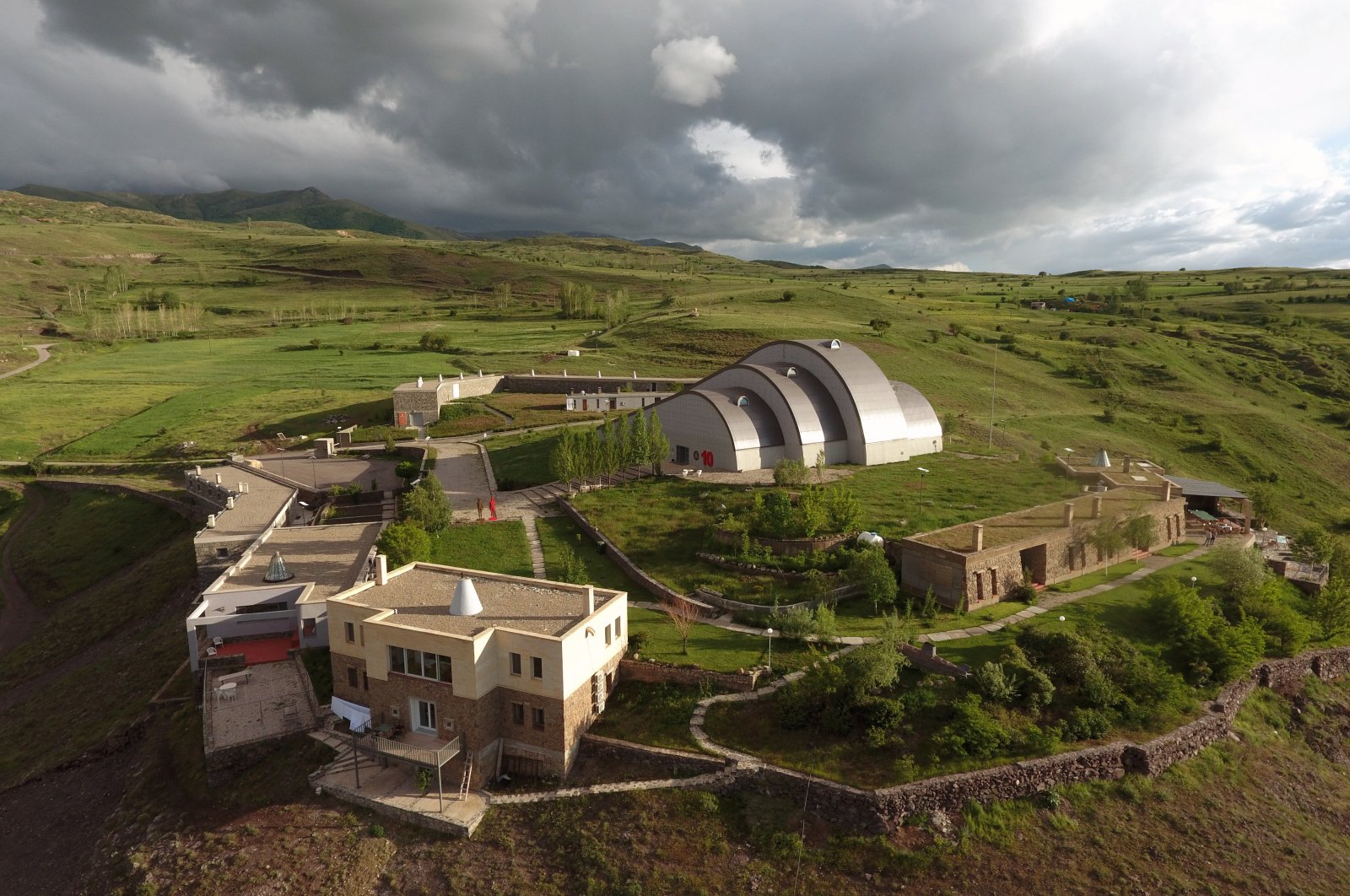 The Baksı Museum is located on a hill overlooking the Çoruh Valley in Bayburt, Turkey.
by İREM YAŞAR May 14, 2020 2:38 pm
RECOMMENDED

The Baksı Museum, located in Turkey’s northeastern province of Bayburt, began hosting Şakir Gökçebağ's solo exhibition “Aşina” ("Familiar") on Sept. 1. The exhibition was supposed to be on display until July 2020, however, the timeline has changed as Turkey has taken serious measures to halt the spread of the coronavirus, including temporarily closing many public areas like museums. While its doors remain closed, the Baksı Museum released an introductory film about the Gökçebağ’s exhibition on YouTube so that visitors can still view this unique show by the artist, known for his sculptures and installations that transform familiar and everyday objects into new forms. This special online exhibition tour, guided by the Bayraktar village’s headman Nabi Akçelik with his own unique interpretations, has received great appreciation from its audience.

In his sculptures and installations, Gökçebağ creates alternate meanings with the objects he has ripped out of everyday life. While creating a personal playground with those behind what we see, he frees them from daily habits. This is a humorous touch on existence on the one hand and a new field of experience established on the other.

“Aşina,” which brings together the artist’s previous works in the museum as well as the new works he has produced with tissues and objects unique to the Bayburt region, is one of the most comprehensive exhibitions opened in Turkey. The exhibition both touches the spirit of Anatolia and reveals the bond that Gökçebağ has woven between the local and the universal for many years with strong words.

In the short film, village headman Akçelik implies the same thing. He says that Gökçebağ uses everyday objects like brooms and presents them to viewers with different geometrical shapes. In the tour of Akçelik, viewers see some traditional Anatolian "sini" trays, prayer beads and plastic shoes which are commonly worn by Anatolian women.

In one of the pieces, Gökçebağ takes photos of a “kına taşı” (henna stone), which is specific to the region, and offers them on five different large canvases in orange, turquoise, pink, yellow and dark blue. In the next piece, Akçelik stands by a jacket hung on brown wall hangers, which you can see in almost all Turkish houses, and says, “As all of you can see, Şakir Gökçebağ chooses his material from our lives one more time in this piece called ‘Aslan Payı’ (The Lion’s Share).”

In “Manzara” ("View"), Gökçebağ has used clotheslines to create mountain-like shapes, which drew my attention most at the show. When I see the piece on the video, Mount Soğanlı, situated between the border of Bayburt and Trabzon, came to my mind, and I was not wrong. As Akçelik also explained in the video, the artist reflected the views of these mountains, which can be seen from the region.

Briefly, I can say that the objects chosen by Gökçebağ in the production of art are the materials of the artist such as paint, marble, stone, paper and canvas, as well as the objects of practical use and ready-made object. These objects take on a new form by breaking away from their true meaning but never compromising on their first meaning. Latch, tray, wall, broom, carpet: They become something new by showing the clue to their identity.

Speaking of an exhibition at the Baksı Museum, I also want to introduce the museum itself, which is one of the most unorthodox museums in the world. Located on a hill overlooking the Çoruh Valley in Bayburt, the museum offers new ideas for the art world. It questions the dependence of contemporary art on city centers, the relationship between culture and production, art and craft, and traditional and contemporary. The Baksı Museum has a rich collection of contemporary art, folk art and ethnographic material. The museum undertakes the mission of being an original cultural interaction center that combines traditional art with contemporary art for artists and researchers.