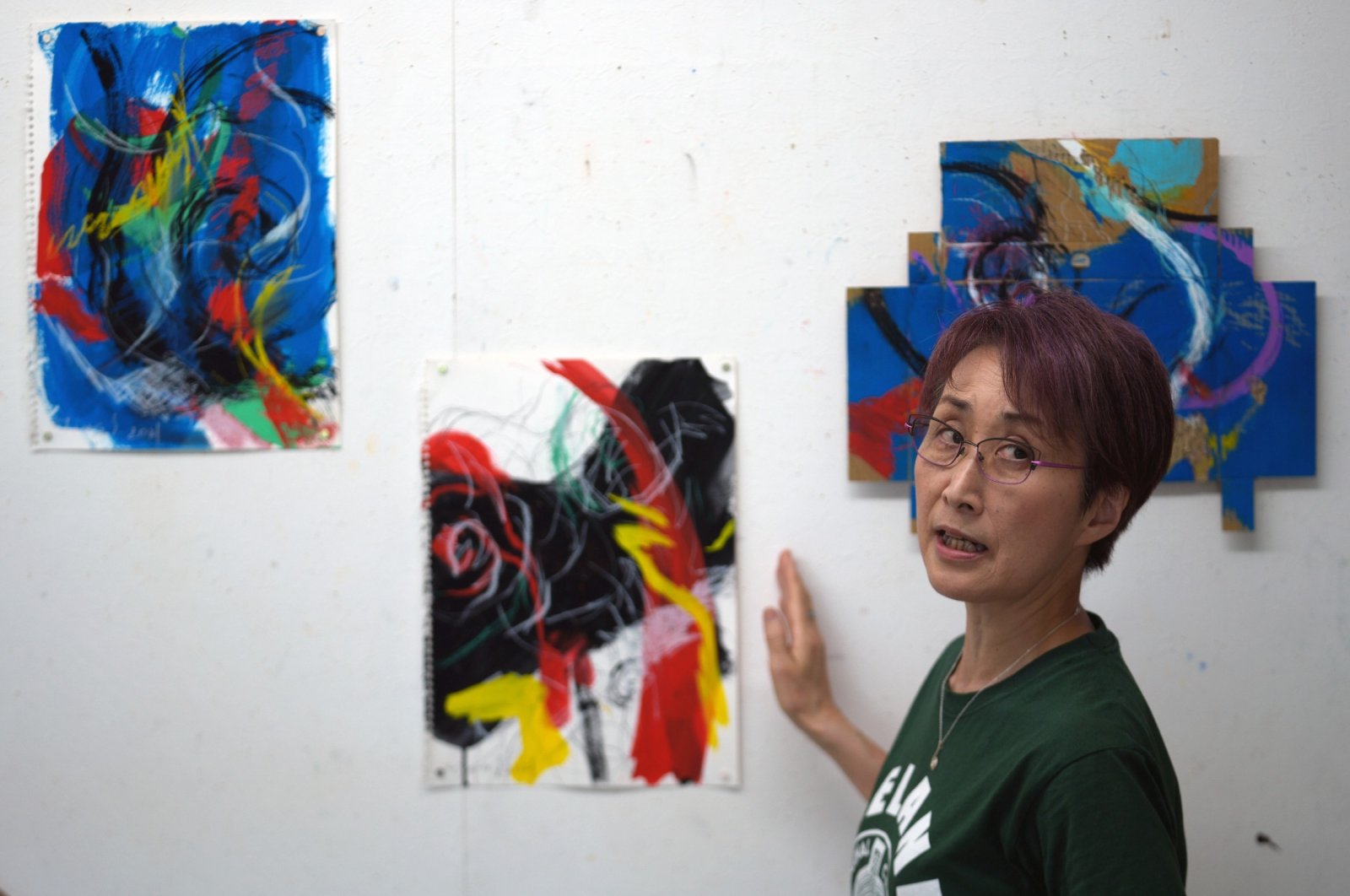 Japanese artist Miwako Sakauchi speaks about her artwork for the art exhibition "Declaration of the end of Olympic games" in Chiba near Tokyo, Japan, June 10, 2021. (AP Photo)
by Associated Press Jun 17, 2021 4:12 pm
RECOMMENDED

Art is a medium through which artists express their opinions and feelings to the world. Sometimes it can take the form of a protest, highlighting injustices or trends that warrant resistance. That has been the case for centuries and it still is as several artists have demonstrated in recent times with their works focusing on the controversial Tokyo Olympics.

Miwako Sakauchi stands in her studio and brushes spinning swirls on torn cardboard and drawing paper, using the five colors designated as symbols of the modern Olympiad.

Titled "Vortex," her paintings show the "anger, fear, sense of contradiction and state violence" over the residents evicted and the trees felled so enormous Olympic stadiums could be built, Sakauchi said. "I can't think of it as a 'festival of peace' in this situation. It's totally nonsensical."

The Japanese public mostly opposes holding the Tokyo Olympics next month during a pandemic, polls have shown, even though outward dissent such as protests has been small.

One little-recognized outlet where people have expressed their frustration and fear over the Olympics has been art.

T-shirts, drawings and other artwork have become a form of protest over the decision to hold the Games against medical advice and the public's opposition. Officials have responded in some cases by demanding the sometimes satiric art and merchandise be removed, and the artists say their freedoms are being curtailed.

"What I can do instead of going to protests is to use my expertise in art," said Sakauchi of her motivation to produce the paintings. She has never participated in street protests or incorporated political issues into her abstract paintings in the past, but the Tokyo Olympics have been a tipping point.

The risk of infection from the virus may have prevented skeptics from taking to the streets to express their frustration. Unlike in Rio de Janeiro where, in 2016, thousands marched for weeks against the last Summer Olympics, recent protests in Japan have attracted dozens at most.

Sakauchi created the paintings after she was contacted by a group of artists who organized an anti-Olympics art exhibit last summer. Her works were displayed in another exhibition in February.

Kai Koyama, the main organizer of the exhibition, said it is his professional duty to protest, even though he knows many Japanese are hesitant to openly show their opinions.

"We're artists. We wouldn't exist if we didn't express ourselves," Koyama, 45, told The Associated Press (AP) in an interview. More than 20 artists have gathered for the project.

Another artist who joined the anti-Olympic exhibition is Sachihiro Ochi, 52, a social worker and doctor in a clinic near Yokohama Stadium, which will host Olympic baseball and softball games. He says Tokyo and Yokohama, the nation's largest cities, have hardened their policies on the homeless because of the Olympics. Public spaces that were once open are now covered with colored cones and obstacles, he said.

Ochi has tried to illustrate that displacement, along with satirical motifs, in his paintings of the marathon and the national stadium.

"There are people who lost their jobs and housing during the pandemic," Ochi said.

Some creators of anti-Olympics art say their freedom of expression has been cramped even though their feelings align with growing public disapproval of the games.

Before the pandemic, designer Susumu Kikutake made parody anti-Olympics T-shirts because of bribery and plagiarism scandals surrounding the Tokyo event. Online comments were harsh and he only sold around 10 shirts a month.

But amid a recent virus surge and rising public concerns, the owner of the P&M shirt shop in Tokyo says demand has boomed. Sales reached 100 shirts in April and 250 in May.

Kikutake said the spike reflects public resentment against a prolonged state of emergency issued by the government.

"My kids' sports events and school trips have been canceled, and we have been forced to put up with it ... but they say they can hold the Olympics," said Kikutake. "It really irritates me that (the prime minister) does not explain why they are holding the Games, and he just keeps saying it will be 'safe and secure.'"

The Tokyo Games' organizing committee demanded Kikutake stop the production of the T-shirts over copyright concerns, he said. He started over with a new design that includes fewer Olympic rings and a misspelling of Tokyo as "Okyo."

Similar attempts to satirize the Tokyo Olympics have been suppressed by the Tokyo 2020 organizing committee, citing copyright infringement. The organizing committee told AP that protecting intellectual property is crucial for Olympics sponsors that have paid huge fees in return for exclusive rights to use the games' symbols. It declined to comment on specific cases.

The Foreign Correspondents' Club of Japan removed a parody drawing that uses the Tokyo Olympic logo combined with features of the coronavirus from their website after receiving a demand for withdrawal from the organizing committee.

Koyama, the art exhibit organizer, is planning a third anti-Olympics art event late next month, when the Olympic opening ceremony is slated to start.

But galleries are wary of subversive exhibitions like his, the artist said. One that agreed to host the exhibit backtracked after far-right activists targeted the space with loudspeaker trucks demanding the cancellation of another exhibition they claimed was unpatriotic.

"Freedom of speech is about to be extinguished because of the Tokyo Olympics," Koyama said. "We're being suffocated."