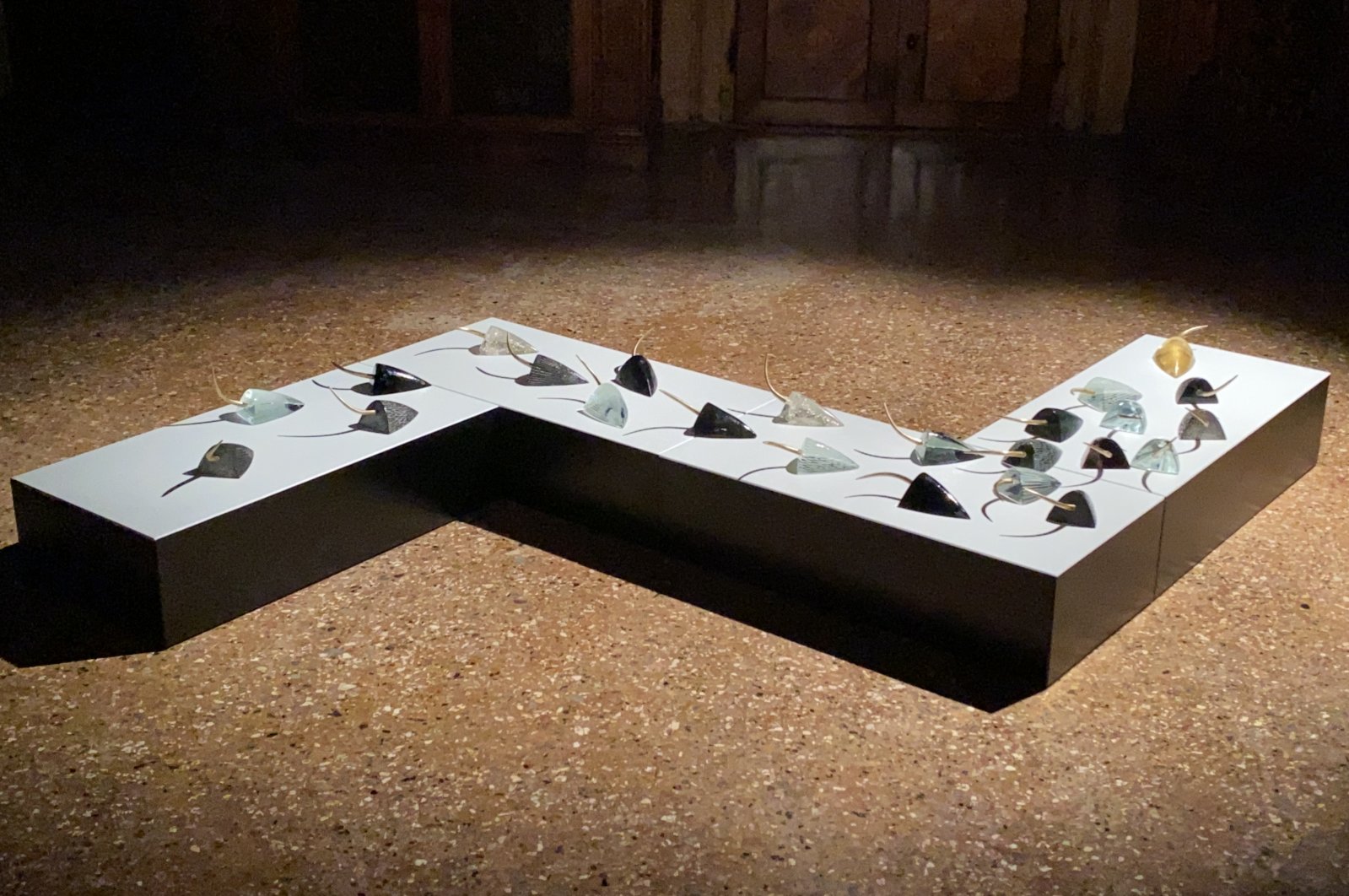 The fourth installation of the annual event will present Felekşan Onar's latest creation ‘ENCODE,’ a work of hot-formed and cold-cut mice figures with metal cast tails, at its hub Palazzo Loredan

Turkish artist Felekşan Onar has been invited to the 4th Venice Glass Week that is scheduled from Sept. 5 to Sept. 13 this year. Despite the pandemic, Onar will participate in the event with her new work “ENCODE” and represent Turkish glass art and history in Italy.

Drawing on sources from her personal history as well as collective memory, Onar is an artist of rare talent and generally deals with the notions of identity, constructed narratives and historical relations in her works. Starting off her career at a private atelier, she received her formal education at the Glass Furnace, Turkey's largest and best-equipped glass and art center. Located on the shore of the Riva river in Istanbul's Beykoz district, the center was originally designed as a glass studio, but it soon became a world-class venue that has continued its uninterrupted training and production activities as it looks to make glass art one of the basic branches in Turkey.

Following her education at the Glass Furnace, Onar initiated her own atelier, Fy-Shan Glass Studio, in Istanbul in 2003. Since then she has systematically educated herself in all sorts of glassmaking techniques, including fusing and slumping, kiln casting, flameworking, hot-forming and blowing and coldworking. She has learned all these practices to be able to incorporate several techniques in her works to present the amazing qualities of the material she has fallen in love with.

“Glass not only expresses my past and present but also my anxieties and expectations for the future. Through glass, I speak, breathe and live,” the artist says.

Onar’s works are housed in important public collections worldwide including the Victoria & Albert Museum in London, the Pergamon Museum in Berlin, the Finnish Glass Museum in Riihimaki, Finland and the Contemporary Glass Art Museum in Turkey's Eskişehir, as well as in private collections.

The artist participated in Venice Glass Week with her glass bridge installation named “41X” in 2018, and with the short film “Esma” in 2019, in addition to the conference series “Istanbul-Murano: A Glass Journey,” whose organization she took part in both years.

Venice Glass Week is an international festival that was founded in 2017 to celebrate, support and promote the art of glassmaking. While many cultural events have been postponed this year due to the coronavirus pandemic, this one will continue without interruption like the Venice Film Festival, which kicked off on Sept. 2 with a reduced lineup, fewer Hollywood stars and socially distanced film screenings running through Sept. 12. The fourth edition of Venice Glass Week offers a program that includes exhibitions, demonstrations, guided tours and online events.

Onar’s “41X” was inspired by the style of Venetian bridges and Ottoman architectural forms. Aiming to convey the artistic and commercial links between the two civilizations over several centuries, the works also offered a new bridge between the two cultures in the modern era.

Participating in the Venetian event for the third time with a new work “ENCODE,” Onar told the story behind this piece: “Istanbul, New York and Venice are the three cities where I have spent a lot of time. As it gets more problematic to live in these three cities, whether it is due to size, population or natural conditions, residents of these cities do not consider relocating, rather become more persistent ‘occupiers.’ What I have also detected is the increasingly vast existence of another species that we share these grounds with, namely mice. I later discovered that mice, in fact, increase in numbers as living conditions get tougher."

As she pondered the situation, the artist started making hot-cast mice in Murano. “Let us see whether those who see these glass mice are perhaps smarter than the rodents and give a break to the cities that we fill with the effect of the pandemic. Even if we did not take this pause, it turns out that nature wants this recess from us.”