Hıdırellez: A colorful celebration in Turkic culture for centuries 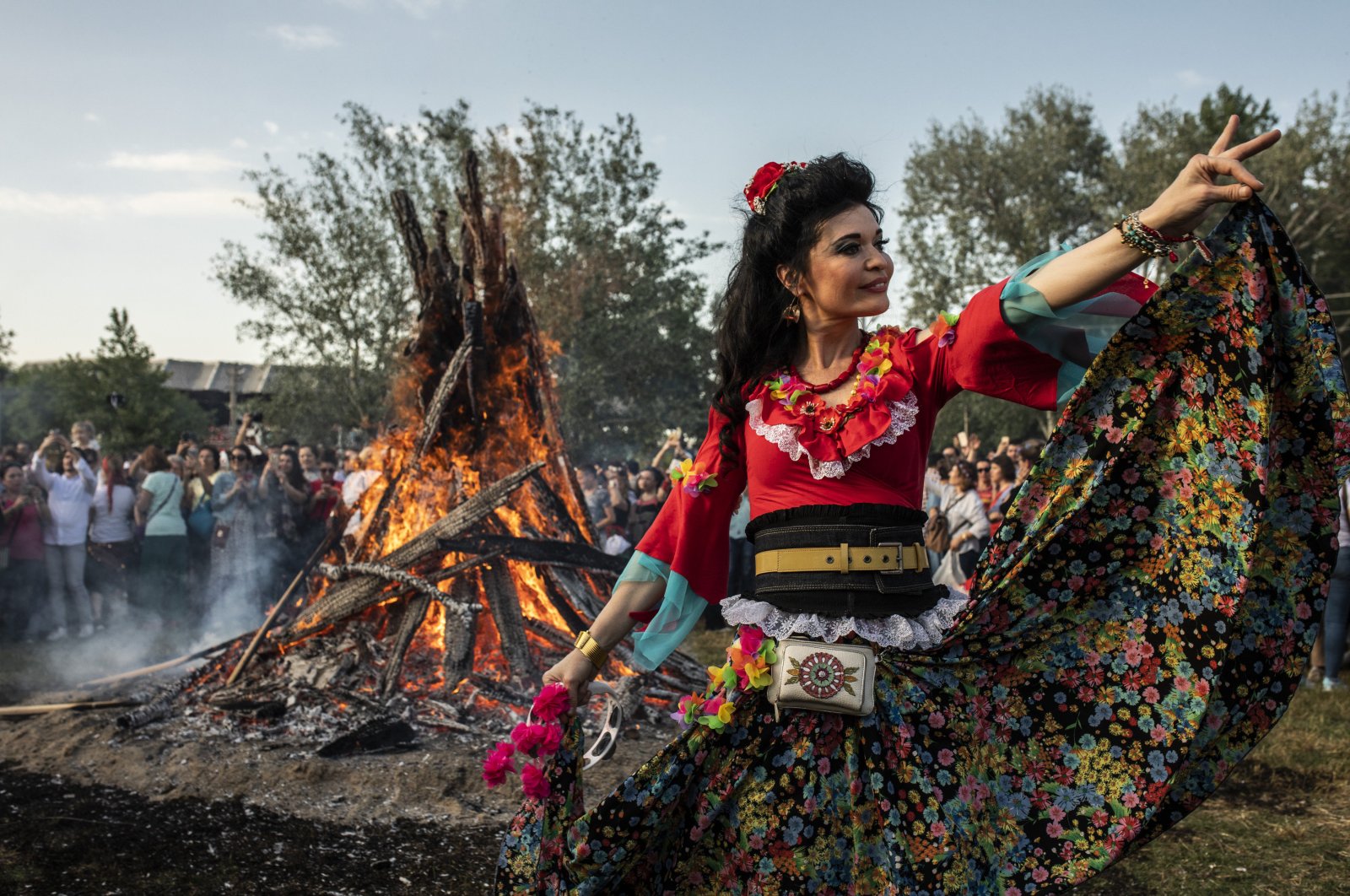 In this undated photo, a woman in traditional attire dances during the Kakava (Hıdırellez) celebrations in the border province of Edirne. (DHA Photo)
by DAILY SABAH WITH AA May 06, 2020 1:06 pm
Edited By Irem Yaşar

Hıdırellez, which is inscribed on the UNESCO Representation List of Intangible Cultural Heritage of Humanity, is one of the seasonal holidays celebrated in the Turkic world. This culture stands out with its impressive story and different traditions

The harbinger of spring, Hıdırellez is one of the seasonal holidays celebrated in the Turkic world. Celebrated as the day on which Hızır (Al-Khidr), a major spiritual figure who is believed to have helped those in distress, and prophet İlyas (Elijah), believed to be the ruler of the seas, met on earth, Hıdırellez has been passed down from generation to generation for centuries.

Registered in the "UNESCO Intangible Cultural Heritage National Inventory" in 2017 as the result of a coordinated effort by Turkey and North Macedonia, Hıdırellez comes to the fore with its impressive story and traditions, according to the information compiled by the Anadolu Agency (AA).

For Hıdırellez, which is celebrated as a traditional holiday with various events all over Turkey every year on May 6, this year, there were no major events within the scope of new types of coronavirus measures affecting the world. Nevertheless, let us analyze this Turkic day with the origins and rituals, even if the pandemic has affected the festivities.

Various ideas have been put forward about the origin of Hıdırellez. Some suggest that Hıdırellez belongs to Mesopotamian and Anatolian cultures, while some claim its origins date back to the pre-Islamic Central Asian Turkish culture and beliefs.

However, this day on which Al-Khidr and Elijah met on earth is celebrated as a holiday in Anatolia, Crimea and Azerbaijan, and in the Middle East and Balkan countries today.

According to popular belief, Al-Khidr and prophet Elijah meet only once every year. It is believed that Al-Khidr aids and guides those who stranded on the land and also brings abundance, while prophet Elijah is the protector of seas. Since they symbolize abundance and fertility, it is believed that everything they step on grows green, everything they touch gets fruitful and heals.

Professor Alimcan İnayet from the Ege University Turkic World Studies Institute said that the pre-Islamic tradition of some of the customs seen in the Hıdırellez celebrations shows that this tradition has existed for Turks for a long time.

İnayet stated that the Hıdırellez tradition is not limited to the Turkic world and Anatolian geography, but is also celebrated in Iraq, Syria and Balkan countries. “According to the belief, Al-Khidr and Elijah meet under a rose tree at night that connects May 5 to May 6 each year. Therefore, it is believed that the day on which these two holy figures meet brings everything that they touch to blessings, fortunes and health. It is due to this belief that people tie a cloth to the rose branch and trees, while the sick roll on the grass, wash and purify with the water of that night,” İnayet said.

Alimcan İnayet explained that practices such as cleaning the house, environment and body, renewing and changing clothes prior to this day, going to the countryside in Hıdırellez, organizing fun festivities and games, setting up tables and eating food, starting a fire and jumping over the flames, visiting tombs, praying for abundance and making wishes reflected the pre-Islamic practices.

İnayet pointed out that Hıdırellez is celebrated with different practices in various regions of the Turkic world. “Celebrations are held in specially selected venues on the day of Hıdrellez. These places are generally greenery, woodland, countryside and waterfront. Celebrations also include animal sacrifice,” he said, adding that tables are set up, eggs are cooked, wrestling is organized, various games such as catch-the-handkerchief, jump rope and swing are played. “Country trips and horse races are held. Chansonettes are sung. Various races, such as eating apples, yogurt and carrying eggs with spoons, are organized.” he continued. “The sacrificed animals are distributed to the poor. Those who are not on speaking terms are reconciled and the richness of Turkic cuisine is exhibited during Hıdırellez celebrations. Hıdırellez soup, keşkek (a dish of mutton or chicken and coarsely ground wheat), rice pudding, halvah, gata (an Armenian pastry or sweet bread), pies, baklava, pastry, spit-roasted lamb, egg, cheese, gözleme (flannel-cake), stuffed vegetables, Turkish delight, pita, ravioli, stuffed chicken, steamed anchovies, mıhlama (a traditional corn mash dish), bandırma (a traditional rice and chicken dish), kaymakçina (a Macedonian desert), and sütpite (a traditional Kosovan desert) are served at the tables. The richness of the tables is related to the wish of abundance and fertility.”

İnayet said that the Hıdırellez tradition, which reflects the wishes and desires of people such as abundance and fertility, strengthens social solidarity functionally. “Hıdırellez is one of the common values of the Turkic world, the Middle East and the Balkans. It is very important to protect, prolong and enrich this tradition,” he said.