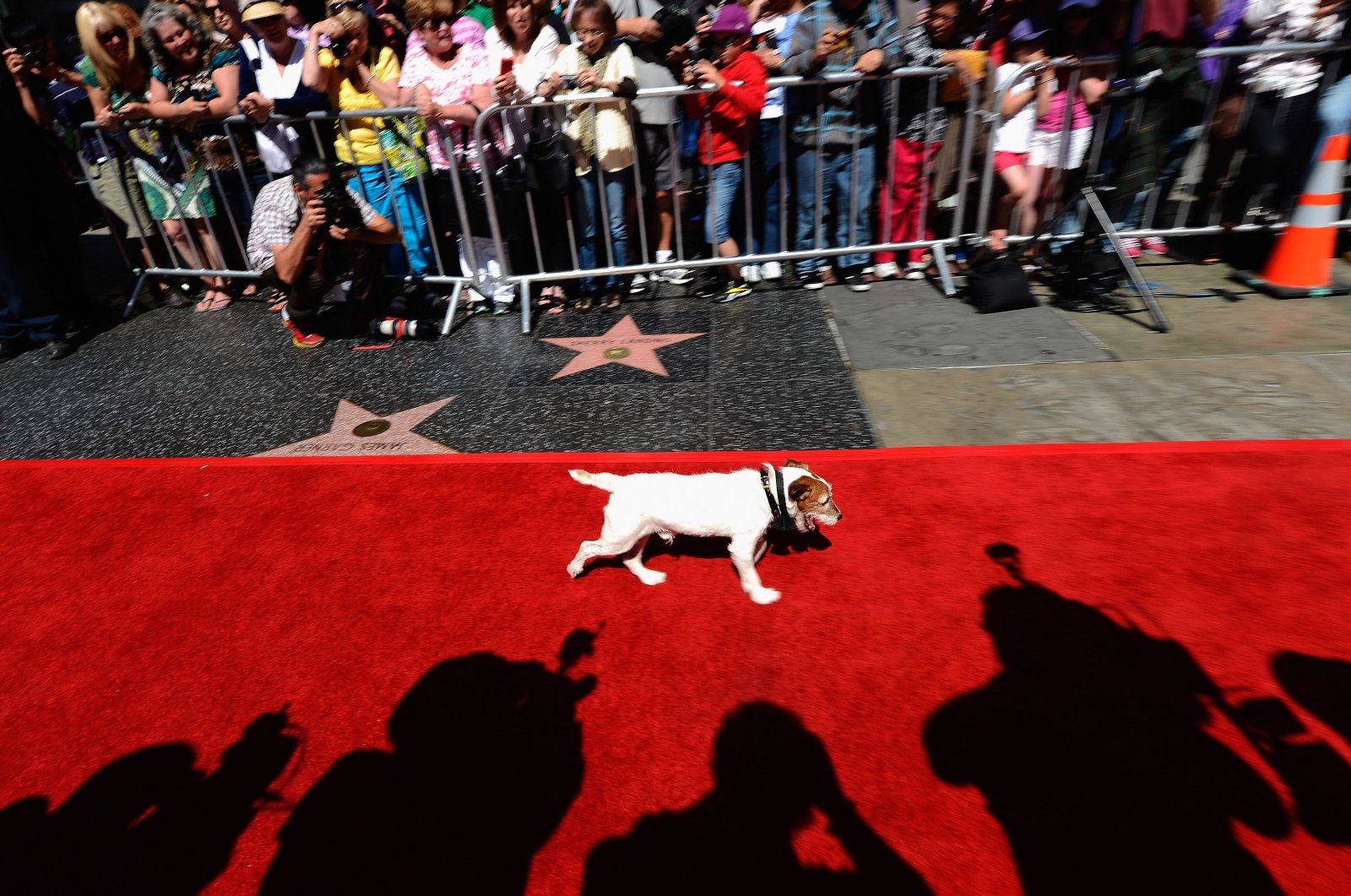 Uggie, the canine star form the film "The Artist" which won an Academy Award for Best Picture, walks the red carpet as he arrives with his trainer Omar Von Muller outside Grauman's Chinese Theatre to cast his paw prints in cement during a ceremony marking his retirement from show business in Hollywood, California, June 25, 2012. (AFP Photo)
by REUTERS May 28, 2020 3:28 pm
Edited By Irem Yaşar
RECOMMENDED

It could be a long while until you hear that Hollywood red carpet staple, "And who are you wearing tonight?"

Red carpets, the lifeblood of movie premieres and award shows, thrive on the buzz of glamorous actors, show-stopping gowns and screaming fans.

But as Hollywood grapples with the coronavirus pandemic, the red carpets of the near future will look very different – if they happen at all.

Crowded with photographers, A-list stars, publicists and fans begging for selfies, red carpets are a crucial element in the Hollywood publicity machine. But what makes them so compelling to watch is what makes them so difficult to manage in the era of social distancing.

"Everybody is desperate to get back to a normal version, where we get to be with people in person, shoulder to shoulder," said one Hollywood publicist who preferred not to be named.

"I don't see it coming back fully until we've got some kind of vaccine. Who knows when people are going to want to engage physically in personal interactions, let alone the travel to get to those places," the publicist said.

A big test will come in July when Christopher Nolan thriller "Tenet" for AT&T Inc's Warner Bros. and Walt Disney Co's live-action "Mulan" are scheduled as the first big film releases since the coronavirus pandemic shuttered movie theaters worldwide and studios moved the rollout of dozens of films to the end of 2020 or into 2021.

Warner Bros. and Disney have not announced their publicity plans for the two movies, nor have the organizers of television's Emmy Awards, which are due to take place in Los Angeles in September.

Los Angeles event planners 15|40 Productions, which has designed more than 200 Hollywood premieres, is consulting with several studios on plans that incorporate social distancing.

"We took the red carpet and we had to re-envision how it would work post-quarantine and keeping people apart," said Craig Waldman, president of 15|40 Productions.

TV crews and photographers, who usually elbow for the room, would be separated into pens divided by plexiglass, while distance barriers would keep media personnel at least six feet (two meters) away from actors. Celebrities would interact with fans via giant LED screens.

"Having a live fan element is going to be a thing for the future, once a vaccine is found," said Waldman. That means a big reduction in media outlets on the carpet and plenty of masks.

"I don't know that we will see Emmy-nominated actresses walking the Emmy red carpet wearing masks," said Hollywood Reporter writer Chris Gardner. "I do think some people – maybe photographers, also journalists – may have to ask questions through masks."

The biggest unknown is whether A-listers will turn up.

"I know one (celebrity) I'm protecting right now is staying away from everything," said Zimet, who doesn't expect red carpets to return in New York until fall, or possibly winter. Zimet said celebrities "have to decide if your health, of the family and yourself, is worth it."

Meanwhile, publicists have been getting creative with virtual premieres and interviews in which actors appear on Zoom or Skype from their homes.

It has worked well for small-budget films, cutting travel costs and allowing actors to be more relaxed.

"They are not in an uncomfortable chair with lights all around them. It's more like chit-chatting with a sort of new friend they have just met on their computer," said a publicist who has organized several virtual events.

But it's a far cry from the excitement of a bustling red carpet.

"This virtual premiere is quite, quite strange," British actress Kristin Scott Thomas said on Zoom from a sofa at home, promoting her film "Military Wives."

"It's just as frightening but just a hell of a lot more comfortable because you're wearing your own dress," she giggled.