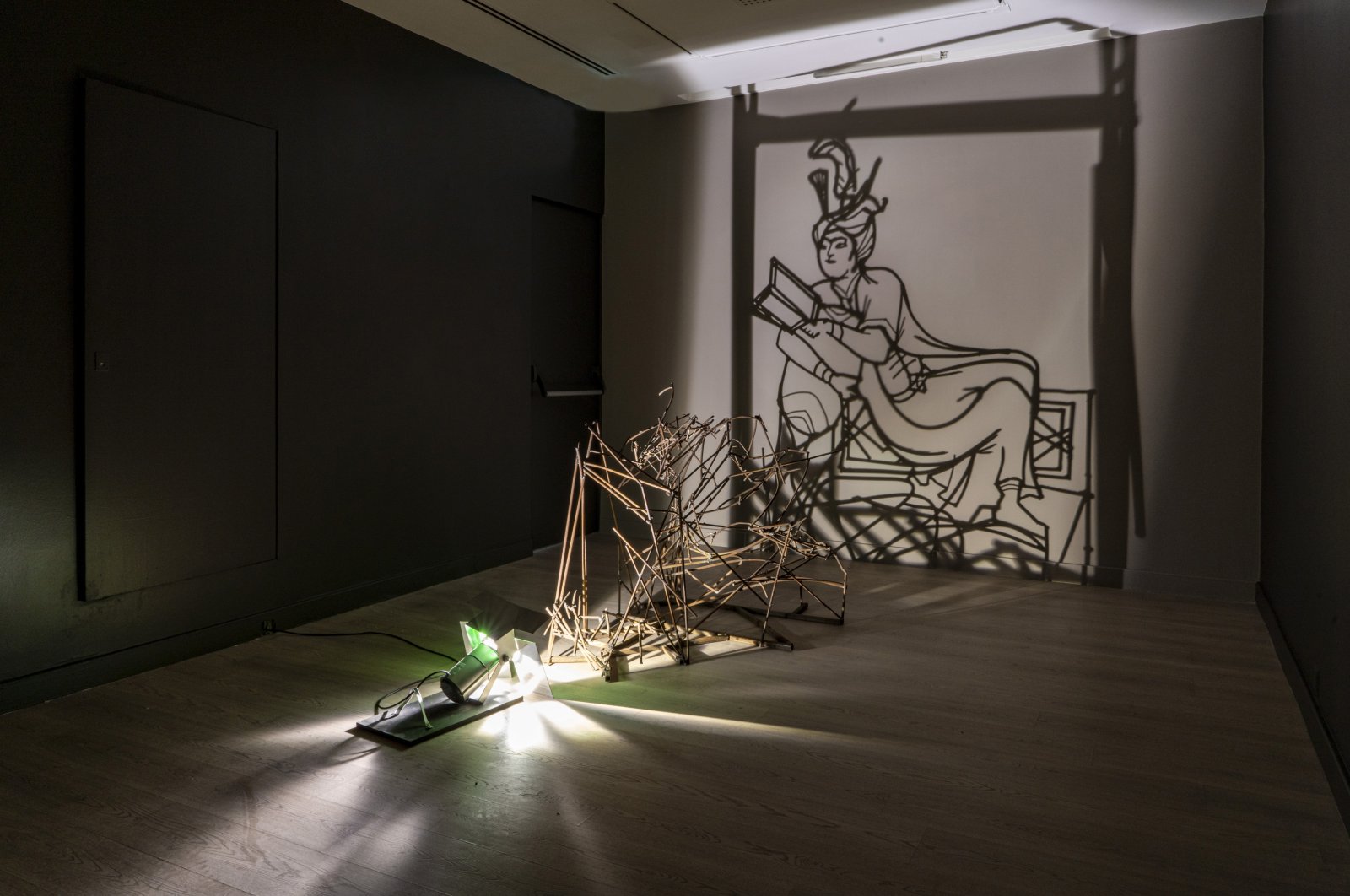 Bringing together the works of 14 artists from across the world working in various media such as sculpture, video, textile and installations, the show shines a light on contemporary approaches to miniature painting. Curated by Azra Tüzünoğlu and Gülce Özkara, the showcase uses the technique to focus on various issues such as colonialism, Orientalism and economic inequality.

Azra Tüzünoğlu and Gülce Özkara said the aim of the exhibition is “not to treat miniature solely as a historical object, but to regard it as a unique art form and emphasize its theoretical potential.”

“In this exhibition, whose works take miniature painting as a starting point, we aim to explore different approaches to and shared principles of miniature painting, tracing the rules unique to the art form as well as its modern-day spin,” the curators added.

Miniature painting was a court practice not only in the Ottoman Empire but also in Persia and India. As the 18th century saw the empire struggle financially, as well as the introduction of the printing press and increased fascination by the sultans with Western art forms, the miniature lost its appeal in the court to make way for new means of expression. Miniaturists looked for other subjects and experimented with various new forms, such as mural painting. Even though miniature painting survived these developments, it could not sustain its dominance in the art world.

The Pera Museum’s “Miniature 2.0: Miniature in Contemporary Art” examines “contemporary miniatures,” which have strayed far from their classical definition with a lively, more modern spin.

The exhibit takes contemporary miniature as a means of resistance. Going beyond familiar East-West comparisons, the works ask questions of art and society to show the audience that other ways of living and thinking are possible. Problematic issues, such as colonialism, are also questioned at “Miniature 2.0” and create fertile ground for helping visitors understand the changing structure of society and patterns of repetition.

A closer look at the artists and their works

Interested in creating works that look into Turkey’s recent past and that carry a visual critique of the modernization process, CANAN has produced two installations for the exhibition titled “The Beauty and the Beast” and “Adams and Eves,” as well as a series of drawings titled “Falname."

Altındere’s work “Tesla to the Moon” depicts 16th-century scientists viewing the 21st century from their observatory on the hills of the Tophane quarter of Istanbul. Referring to the painting made by Ottoman court painter Konstandinos Kizikinos in 1789 in his work entitled “Sultan’s Accession to the Throne Ceremony with Drone,” Altındere brings elements from the classical miniature style and contemporary figures together.

One of the leading representatives of contemporary miniature painting, Sikander uses classical Pakistani-Hindu miniatures as her departure point to level contemporary historical critiques. First shown at the Sharjah Biennial, Sikander’s work in this exhibition, “Parallax," is a three-channel installation made up of hundreds of digital animations. The work opens with an emphasis on the geostrategic importance of the Strait of Hormuz, through which 40% of Middle Eastern oil is shipped, and continues with the concepts of conflict and control as key themes of a period from the modern to the postcolonial era.

One of the leading figures of his generation, Qureshi created his series titled “Moderate Enlightenment” between 2006 and 2009, earning him international fame for highlighting the discrimination religious people faced throughout the world in the wake of 9/11. Qureshi’s installation “Seeming Endless Path of Memory” and video titled “Breathing” form a unique synthesis of the formal language of contemporary motifs, abstract painting, traditional motifs and techniques, exhibited together with drawings that were commissioned for the exhibition.

Wasim has created a series of striking works for the exhibit. The first work, drawn in the style of 16th-century traditional Iranian miniatures, questions how migrant children are marginalized on Western television. Another work by the artist, “Silent Plea” (2019), refers to “Madonna,” the famous 19th-century painting by the French painter William Bouguereau. In the U.S., 1,300 children are killed by firearms every year, while at the same time the American government has no qualms about meddling militarily in other countries' affairs. The work points to the perception of guns being more valuable than children.

Alakbarov, who exhibited his works to large audiences at the Azerbaijan Pavilion during the Venice Biennial in 2013, creates unexpected scenes using discovered objects. He uses light and shadow as fundamental elements in his works, which can be described as shadow paintings. What at first appears to constitute random heaps of metal or plastic objects haphazardly thrown away, the compositions can only be seen clearly when light is shone upon them.

Chagan's work made up of miniature terracotta bricks shows the influence of graffiti or mural ads. The artificialness of the discovered materials and the fluid form of hard, solid objects such as bricks create a fascinating illusion for viewers.

Awartani’s installation and video are among the most striking works of the exhibition. Created in a vacant house in one of the old neighborhoods of Jeddah, where the artist's grandparents once lived, the installation shows Awartani covering the floors of the house with sand in a manner reminiscent of old Arabic houses while using the geometrical tile forms in traditional Islamic art. Once this difficult process was complete, she begins sweeping the floors in symbolic reference to the destruction of cultural heritage.

The links between home, cultural identity and Islamic geometry are even more pronounced in the works of Abbas. The geometrical patterns the artist creates using two kinds of marble with different colors are reminiscent of floor tiles used in homes as well as the marginal ornamentations in miniatures. The choice of materials like marble and sand goes hand in hand with the feeling of belonging and the desire to reinforce memories she does not want to lose.

The works of Pouyan, meanwhile, explore spaces, using culture to focus on fundamental concepts such as power, tyranny and sovereignty. His inspiration comes from Persian miniatures, and the artist makes references to Sumerian, Babylonian, Persian and Indian cultures. One of two Persian miniature artists in the exhibition, the artist removes all figures from the surface of the miniature and enables the viewer to look at spaces that have become divorced from the narrative.

For this exhibition, Pouyan has removed all the figures from a scene titled “Reception Ceremony of Elkas Mirza in the Süleymanname,” a book of Ottoman miniatures in the Topkapı Palace collection narrating the life of Suleiman I, aka Suleiman the Magnificent.

With works that will attract the attention of both traditional and contemporary art lovers, “Miniature 2.0: Miniature in Contemporary Art” exhibition can be seen at the Pera Museum until Jan. 17, 2021.