Nazarin: Behind the scenes of Mexican masterpiece in Istanbul 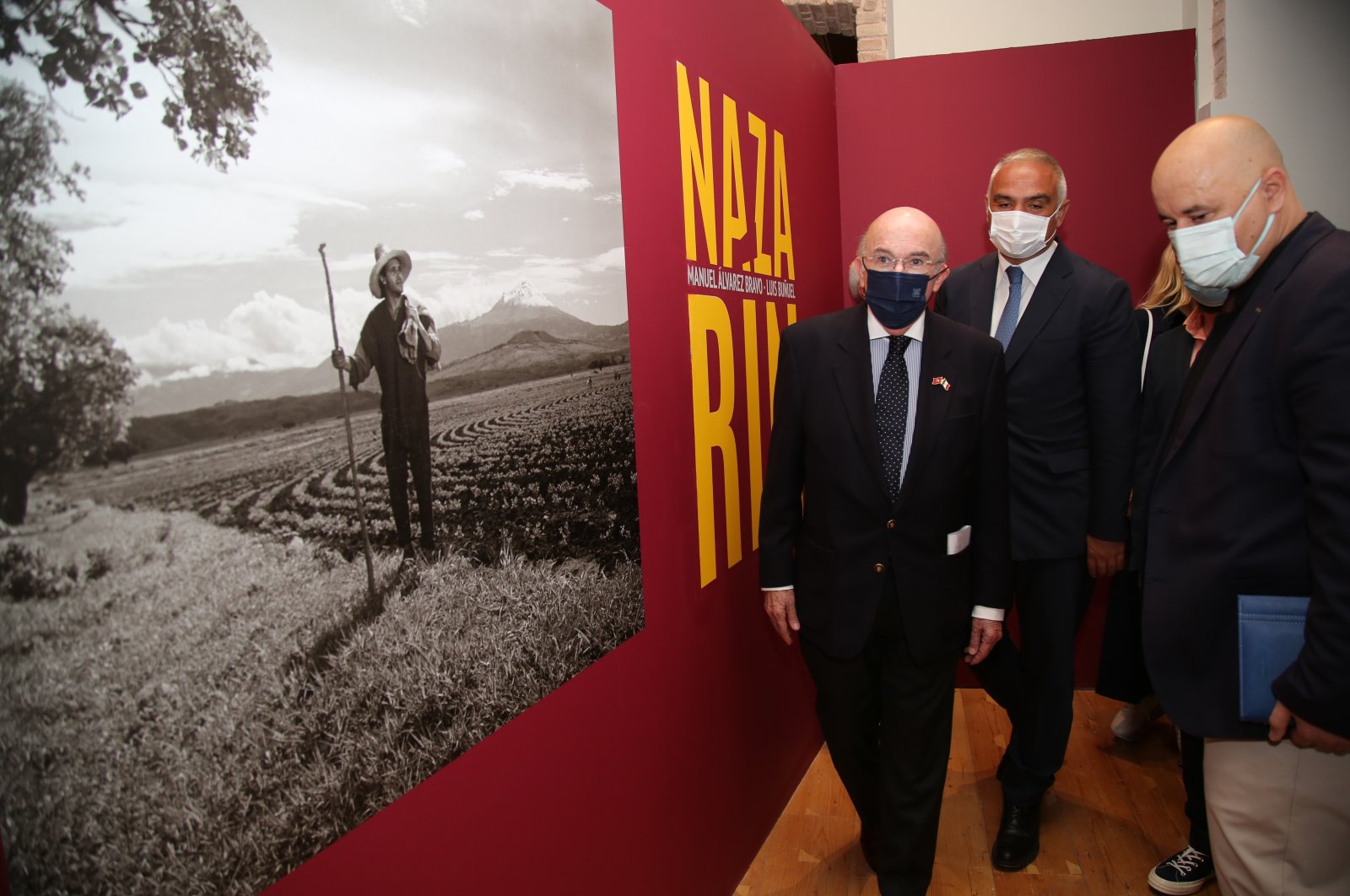 Istanbul Cinema Museum, working with the Ministry of Culture and Tourism and the Mexican Embassy, welcomes art and cinema lovers behind the curtain of the 1959-classic 'Nazarin' in an exhibition launched to showcase the brilliance of Luis Bunuel, one of the forefathers of surrealist cinema and a Latin American cinema icon

The Istanbul Cinema Museum, on the iconic Istiklal Avenue, welcomed visitors Friday to an exquisite and unique exhibition showcasing what went on behind the scenes in the film "Nazarin," one of the masterpieces of legendary director Luis Bunuel, known as the father of surrealist cinema. Minister of Culture and Tourism Mehmet Nuri Ersoy and the Mexican Ambassador to Ankara Jose Luis Martinez y Hermandez were among many others from the culture, art and cinema world who attended the distinguished event.

The film world showed particularly great interest in the exhibition curated by Hector Orozco, as Reis Çelik, president of the Film Directors Association, and prominent names of the cinema scene like Atilla Dorsay, Biket Ilhan, Ezel Akay, Yılmaz Atadeniz and Ercan Kesal could be seen at the reception of the event.

Minister of Culture and Tourism Ersoy expressed his elation to be attending the event as the art world makes its comeback in Turkey, after months of shutdown due to the global COVID-19 pandemic.

"After a long break, normalization has begun to reflect on culture and art as well," he said. "This makes us very happy. Istanbul is one of the capitals of culture and arts in the world. It is our primary duty to crown it with such international events."

"We are delighted that Istanbul has been chosen as the second stop of the Nazarin exhibition after Madrid," he added.

Ersoy stressed that the culture and art world needed to normalize as quickly as other sectors. "As the ministry, we give our best support as soon as possible. We have started our efforts to host many cultural and artistic events, especially local and now international events. Hopefully, this wind will accelerate by the end of October and the people of Istanbul will be satisfied throughout the winter with the culture and art activities that we missed so much. We will gradually shift these activities to our metropolitan cities, Ankara, Izmir and other cities," he stressed.

Ersoy also touched upon the Beyoğlu Cultural Road project, which includes the new grand Atatürk Cultural Center in Taksim, explaining that the project began three years ago with the restoration of numerous structures.

"The restorations have been completed, the buildings are starting their service quickly. We are inaugurating the last leg, the Atatürk Cultural Center, on Oct. 29, and we are moving to the second phase of Beyoğlu Culture Road with great events," he said and went on to provide more details of the events.

"As of Oct. 29, we will embrace the people of Istanbul with very rich events for two weeks. As the Ministry of Culture and Tourism, we will take the first step to return culture and art to the days before the pandemic period. I would like to thank our Mexican ambassador for his support. It also sends a message to the world to show that the events can come to life. We are hosting a beautiful event together with Mexico. We hope to have nice events," he said.

Ceyhun Tuzcu, general director of Istanbul Cinema Museum, expressed his hope for the future as the art world returns to in-person events.

"We opened the behind-the-scenes photo exhibition of 'Nazarin' by Luis Bunuel, one of the most important names of surrealist cinema, at the Istanbul Cinema Museum after Madrid. The Latin American cinema world also showed great interest in our exhibition. We will continue to host international projects in the coming days," he said.

The guests also had a chance to watch "Nazarin" on the big screen after experiencing the exhibition at a screening at the historical Atlas 1948 Theater.

Adapted from Benito Perez Galdos' novel of the same name, "Nazarin" depicts the inner interrogations of a priest living in Mexico. It was filmed in 1958 by Luis Bunuel. The film went down in history as one of Bunuel's most intimate and personal films, and it was awarded as the Best Foreign Language Film at the Cannes Film Festival. After 60 years since its premiere, "Nazarin" went through a restoration and met with eager audiences in 2019 once again at the Cannes Film Festival.

The behind-the-scenes footage captured by Manuel Alvarez Bravo, the biggest representative of modern photography in Latin America and described as the "Eye of Mexico," met with art lovers in Madrid in 2019 as a behind-the-scenes exhibition.

Under the curation of Hector Orozco, for the first time since Madrid, the exhibition launched again this time at the Istanbul Cinema Museum.

The exhibition, which stands as the conjunction point of two creators of great visual feasts in Bravo and Bunuel, includes 131 pieces, consisting of photographs printed from the original negatives taken by Bravo, promotional materials used in 1958 and behind-the-scenes sound recordings and videos.

Art and cinema lovers will be able to visit the exhibition at the Istanbul Cinema Museum until Nov. 21, 2021.