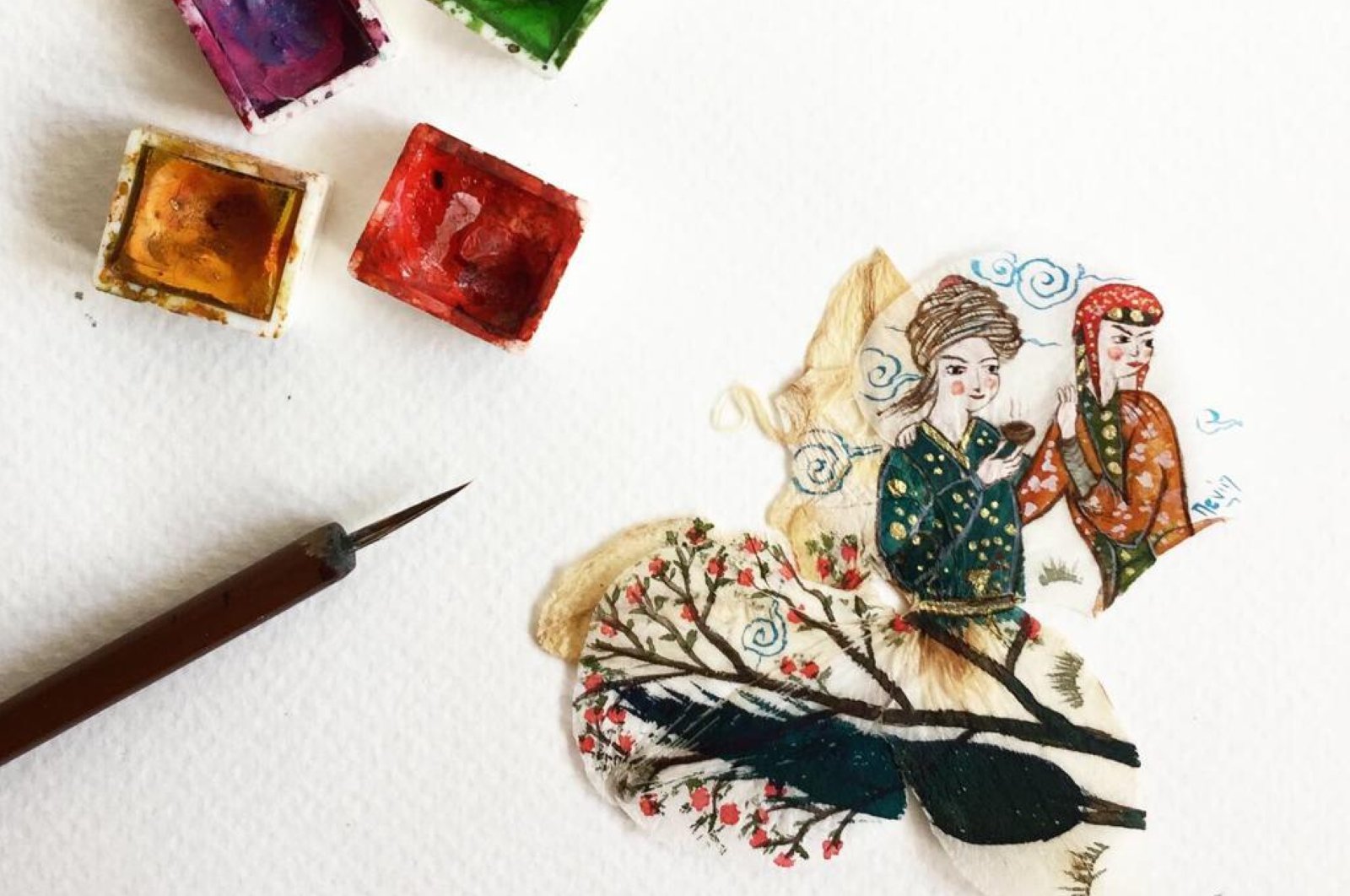 During the coronavirus period, you can discover the Turkish art of miniature painting with artist Nevin Yapıcı’s videos online and try to create your own artwork

Thinking back to the not-too-distant past, I seem to recall that when we were all at the office, we would complain about being stuck behind a desk all day. Comparatively, since the coronavirus turned all of our old habits upside down, we have started to complain about being bored at home and staying in bed all day. It is perhaps human nature to never be content, but we are all surely aware that as the world settles into a new normal, the time that we spend at home is all the more precious. Therefore, those who can manage to shake off their fatigue and work on improving themselves at home, honing in on their skills with various activities, will come out of this process in a far better state of psychological health, bringing them success in the post-pandemic era.

Finding a hobby you enjoy is one of the best ways to keep busy, as the pleasure it gives will only boost your energy levels. With that in mind, if you are someone who likes to tinker with arts and crafts, especially, then the classical Turkish art of miniatures might just pique your interest.

The term miniature is generally used for small, finely crafted paintings. It is believed that the word derives from the Latin "miniare," which refers to a painting done in red, and later passing into French. A cornerstone of miniature art is the requirement to convey the subject completely. Therefore, perspective is not adhered to. Distance and length are not suggested by light or shadows; miniatures are pictures without light, shadow or even what would be considered a European notion of perspective. While historical, literary and scientific subjects can be found using miniature art, traditionally, Turks mostly used it as a medium to record history. While this grants us the opportunity to bear witness to various customs and traditions, as well as early attire and moments in Ottoman-Turkish history during the period in which they were made, each of these works necessarily serves as a historical document.

It is thought that the miniatures of Turks appeared between 745 and 840 in the time of the Uighurs, who ruled over part of Central Asia. The miniatures created by Uighur Turks in the Turpan region in the middle of the eighth century later became the sources of Turkish miniature art. After the disintegration of the Uighur state, this art form was continued by the Seljuk Turks, thereby leading to the creation of the first Islamic miniatures. Due to their relations with Persia and the Seljuks in Iran, miniature art spread even further. During the time of the Ottomans, the influence of Iran and the Seljuks lead to the art of miniature continuing until the 18th century, with many important artists trained in this field.

Today, a Turkish artist called Nevin Yapıcı is aiming to bring this historical art form into your home. Having devoted herself to the form, Yapıcı has prepared a number of widely shared videos about how to draw miniatures on dried orchids and shared these around social media. The miniature artist has given people a great opportunity to develop a hobby while the pandemic continues to keep us shut between four walls.

Yapıcı, 26, a graduate student who studies theology at Marmara University, has been engaged in the art of miniature, which is nourished by different periods and cultural mosaics in the Turkish-Islamic geography, for four years. Currently, she continues to develop her miniature skills at Küçükçekmece Traditional Arts Academy, sometimes experimenting with materials other than paper, alongside her studies.

In an interview with Anadolu Agency (AA), Yapıcı stated that miniature art is a hobby anyone can take up and is perfect to do at home. She explained that it was considered a palace art in the Ottoman period and used to be practiced in miniature workshops: “Miniature is a book art showcasing the lives of sultans, wars, parades and ceremonies. In fact, we see works featuring not just the lives of sultans but also in a number of subjects, including medicine, chemistry and geography. Today, anyone can easily study miniature art at specialized courses. I think that everything that goes into a frame in a miniature actually represents the inner world of the human.”

Emphasizing that miniatures tell of the journey of humankind, Yapıcı says: “The art of miniature has led me to discover myself, to recognize myself, to measure my patience and imagination and to love myself. I form a bond between myself and my miniature.”

During the pandemic, Yapıcı says she sought to share what she had learned with the wider public, creating a new work by drawing miniatures of dried orchid flowers. According to the artist, one needs to be courageous and try different things in art. Yapıcı noted that she has shared miniatures she has drawn on orchids through her videos on social media. “Drawing miniatures on flowers may be difficult at first, but you can draw larger objects on small leaves. If you cannot find orchids, you can draw quasi-miniature forms on big leaves. You can easily work on leaves dried by the pages of a book. You need to draw on any leaf first with a pencil and then paint it. Anyone can try the art of miniature in the process when they are at home, and I think they can do it easily,” she added.

Indicating that she had received very positive feedback from her followers regarding the videos, Yapıcı continued: “I have received very good reactions. There have been many who wanted to post the orchid flowers on social media. After it was posted on Twitter, santoor player Sedat Anar made the first comment. Later, the video received over 8,000 likes.”

If you want to make use of your time with something creative during the current period, you can watch Yapıcı’s videos to learn how to make miniatures and try them on leaves or flowers. Yapıcı also recommends spraying varnish on miniatures drawn on leaves and using them as bookmarks.