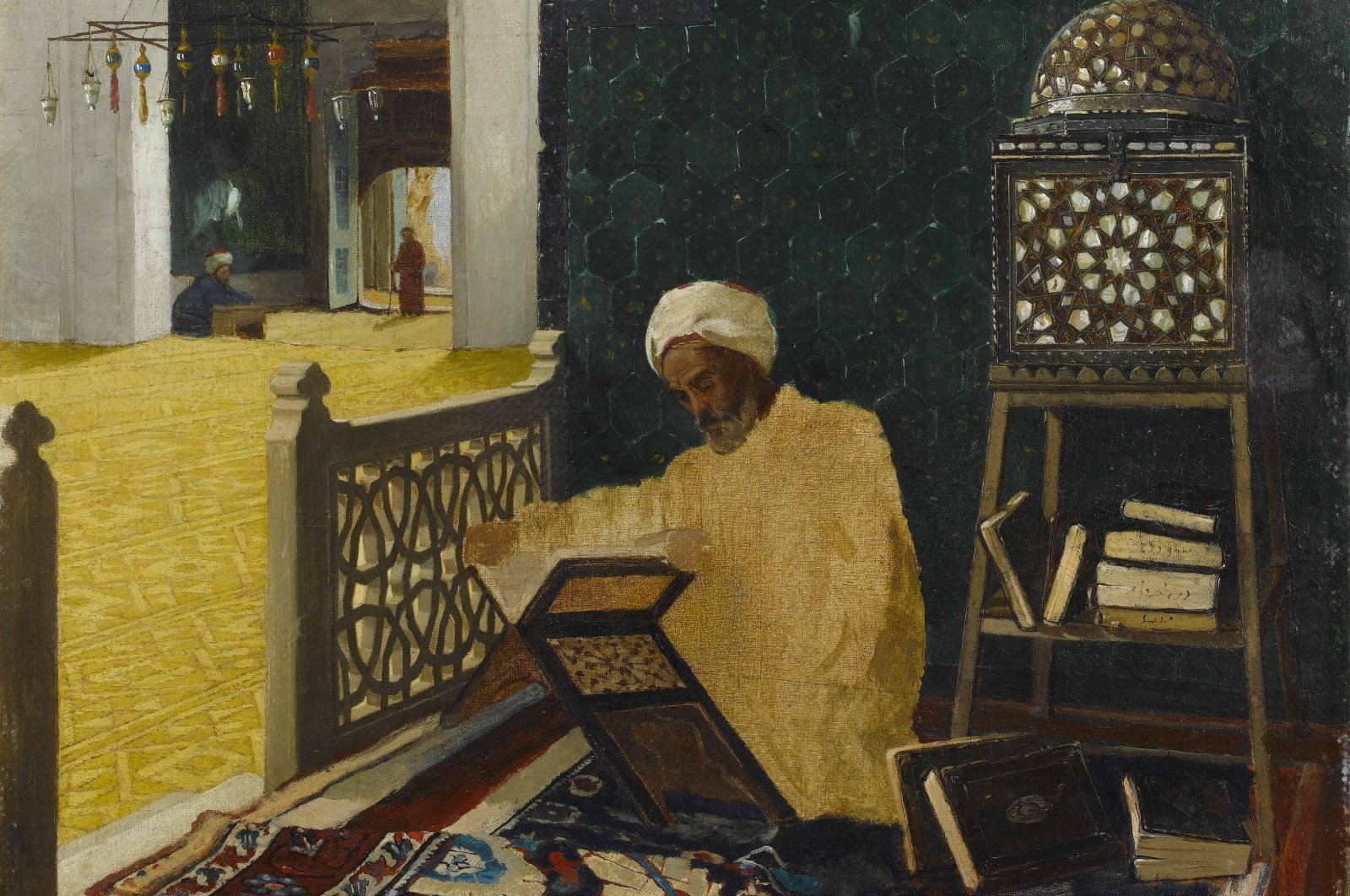 Osman Hamdi Bey's “Kuran Okuyan Hoca” ("Hodja Reading the Quran") was one of the works examined in the project.
by DAILY SABAH Jun 02, 2020 1:03 pm
Edited By Irem Yaşar
RECOMMENDED

The research and conversation work was presented as part of the exhibition “Osman Hamdi Bey Beyond Vision,” which has been on display for visitors at the Atlı Köşk (Mansion), in Istanbul's Sarıyer district since June 6, 2018.

With Google Arts & Culture, the exhibition is now available online for an international audience. The online exhibition offers Turkish and English language options. It provides detailed information on the techniques and material structures of the works attributed to Osman Hamdi Bey, as well as details about the scientific methods used to explore the artist's production more closely.

The project, in which the artist's paintings such as "Vazoda Çiçekler" ("Flowers in a Vase"), "Kuran Okuyan Hoca" ("Hodja Reading the Quran"), “Kokona Despina,” "Naile Hanım Portresi" ("Portrait of Naile Hanım"), "Arzuhalci" ("The Petitioner") and "Cami" ("The Mosque") are examined comparatively, reveals a road map for conservation works not only in Turkey but also in the world.

The Scientific Analysis and Conservation of Osman Hamdi Bey's Paintings program, which constitutes the basis for the exhibition, is a first and leading authority about the artist's artwork in Turkey. This research was launched in 2016 as part of Bank of America Merrill Lynch’s international “Art Conservation Project.” The study in question is the most detailed research on the paintings of Osman Hamdi Bey in the world.

The first step of the research conducted by the Scientific Analysis and Conservation of Osman Hamdi Bey’s Paintings program included the examination of old restoration procedures conducted on the paintings, the use of heavy metal-containing paint and the findings in the underlying layers not visible to the naked eye uncovered through an X-ray imaging technique.

The sketches that Osman Hamdi Bey drew with a charcoal pencil before applying the paint, his painting techniques and the transformation of his works were revealed for the first time through this process, and chemical analysis studies were carried out to examine the structure, color, paint layers and texture of the materials used by the artist.

During the study, it was discovered that Osman Hamdi Bey’s paintings, dating back to the late 19th century and the early 20th century, had paint cracks and spills and foxed varnishes on their surfaces due to natural aging effects. Conservation of the cleaned and fortified works was also carried out as part of the program.

The project was jointly conducted by Sakıp Sabancı Museum, Sabancı University, Koç University and Istanbul Technical University. Also, the Getty Conservation Institute worked as a consultant in the evaluation of the test results.