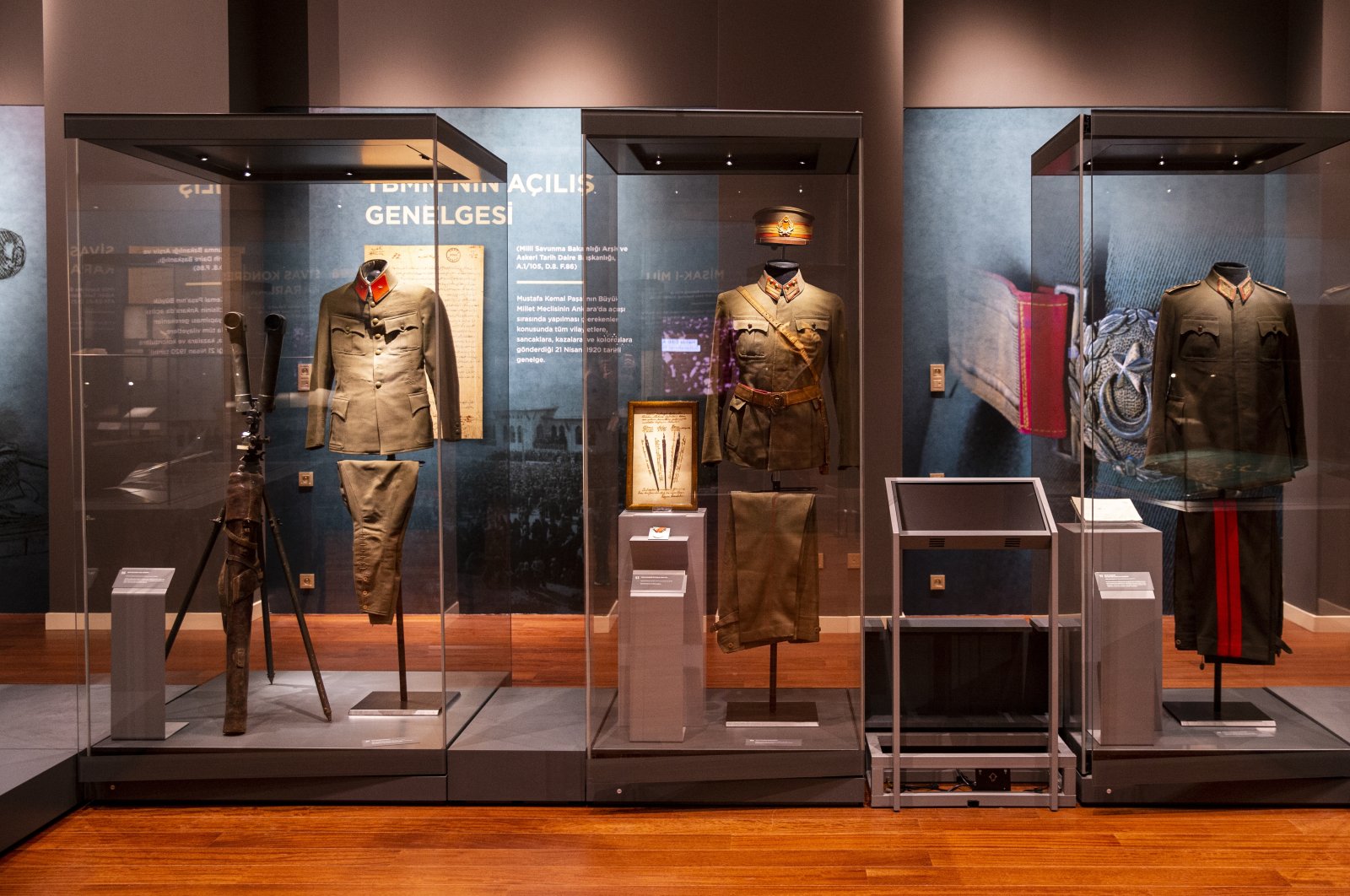 The Presidential Library opened a special exhibition on the anniversary of Turkey's Republic Day, documenting the country's struggle for independence

The "War of Independence Exhibition," consisting of special works that witnessed Turkey’s national struggle and the establishment of the Turkish republic, opened at the Presidential Library on Oct. 29, Republic Day, under the auspices of President Recep Tayyip Erdoğan. Designed with the slogan "Sovereignty belongs to the nation," the exhibition will remain open for two months.

Detailing aspects of the War of Independence, which started in 1919 when revolutionary statesman Mustafa Kemal Atatürk began building an army to fight invading forces, the country's culture, daily life, military as well as political and diplomatic dimensions are presented through 100 objects and documents. It will bring to light important historical records of the war, which was won as a result of great heroism, for the first time.

The exhibition will display for the first time the first flag and banner raised over the Turkish Grand National Assembly (TBMM) building on the day of its foundation day on April 23, 1920; the first official document of the proclamation of the republic; the flag which was in the hands of the vanguard forces during the Aug. 1922 Great Offensive – the largest and final military operation of the War of Independence – and bearing names of the cities and towns that were liberated from the occupation; the war plan that was drawn during the Great Offensive; the gun and sword of Sütçü Imam, one of the heroes of the War of Independence; the cotton yashmak and harem pants belonging to Satı Kadın, an important heroine of the War of Independence; and the pens with which the treaties of Alexandropol (Gyumri), Kars and Moscow were signed with the Soviet Union to stabilize the Eastern Front.

Besides, the document of the Armistice of Mudros, the decree that appointed Mustafa Kemal Pasha as the ninth army inspector, Atatürk's briefcase, military uniforms, decisions of the Erzurum and Sivas Congresses, documents of Misak-ı Milli (the National Pact, a set of six decisions made by the last term of the Ottoman Parliament), documents related to the Treaty of Sevres, a harsh peace agreement foreseeing the total dismantling of the Ottoman state, as well as the Treaty of Lausanne which marked the end of the War of Independence will also be on display during the exhibition.

The show was launched with an opening ceremony with the participation of Erdoğan on the occasion of the 97th anniversary of Turkey’s Republic Day, which celebrates Oct. 29, 1923, when the TBMM amended the constitution to change the system of government to a republic. The day concluded the four-year War of Independence, which was waged against several countries, including World War I Allies Great Britain, France, Italy and Greece. Following the proclamation of the Turkish republic, Parliament then voted unanimously to make Atatürk the country's first president. Since then, Oct. 29 has been celebrated as Republic Day every year across the country.

The exhibition at the Seljuk Museum and Exhibition Hall of the Presidential Library was prepared through contributions from the Culture and Tourism Ministry General Directorate for Cultural Heritage and Museums, the TBMM, the Ministry of National Defense (MSB), the General Directorate of State Archives, the Presidential Atatürk Museum Pavilion, Ankara University, the Ismet Inönü Foundation as well as with items from private archives and collections.

Speaking to Anadolu Agency (AA), Presidential National Library Department head Ayhan Tuğlu said that the exhibition was prepared jointly with the Ministry of Culture and Tourism per the instructions of President Erdoğan.

Explaining that citizens can visit the exhibition starting on Oct. 30 by obeying the rules of mask-wearing, social distancing and hygiene, he said: "More than 100 original works from different museums are included in this exhibit. There are also works from private family museums, the Ismet Inönü Foundation and the Celal Bayar Foundation. There are also documents and objects that will be exhibited for the first time in our exhibition."