Refugee puppet embarks on important journey from Turkey to Europe 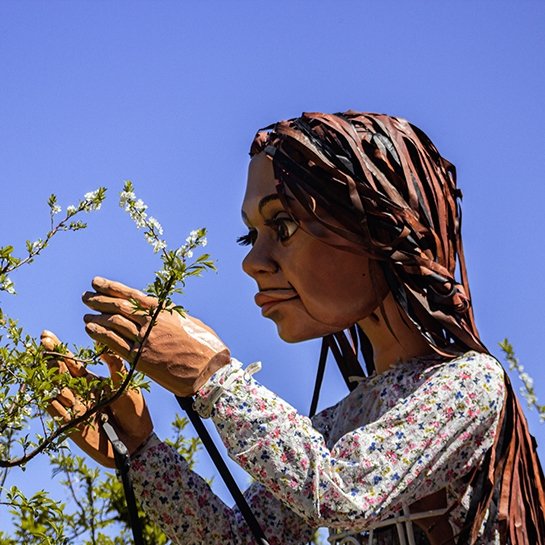 The puppet Little Amal is photographed with branches of a tree.
by DAILY SABAH Jul 08, 2021 12:04 pm
RECOMMENDED

"The Walk," a traveling festival of art and hope in support of refugees, produced in cooperation with Handspring Puppet Company – the world-famous creators of War Horse – plans to bring together many celebrated artists and cultural institutions to create one of the most outstanding and innovative public art initiatives this month. As part of the project, a 3.5-meter (around 11.5-foot) tall puppet named Little Amal, a 9-year-old Syrian refugee, will embark on an adventure from the Turkey-Syria border to the U.K. to raise awareness about refugee children separated from their families.

Amal's four-month-long journey to find her mother will start in Gaziantep, a city in southeastern Turkey near the Syria border on July 27. Little Amal will continue her journey across Turkey, passing through Adana province, the Tarsus district of Mersin province, Mersin city center, the Bozkır district of Konya province, Antalya province, Pamukkale in Denizli province and Denizli city center. She will then continue to the Selçuk and Urla districts in Izmir province, before heading to Izmir city center and Çeşme. Along the way, Little Amal will be greeted by cultural and artistic events being held by partner institutions, artists and nongovernmental organizations (NGOs).

A press conference was held online on July 7 to announce Amal's route across Turkey. Speaking at the conference, the project’s art director Amir Nizar Zuabi said the project was important in helping achieve their goal of transforming the current perception of refugees. “The project aims to highlight the cultural contribution of refugees to their host countries and put forward the tragedy of displaced people all around the world,” Zuabi stated.

The art director explained that they deliberately chose Gaziantep as the starting point to counter the view that the refugee crisis emerges from the Greek border. He added: “It is known to us that the refugee crisis is an issue long before the flow of people hit the European borders. That’s why we have chosen Turkey as our initial point and it’s therefore significant.”

"The Walk" will be one of the most ambitious public art events ever realized to date and is conducted with the support of over 250 international project partners. Among the project partners are Manchester International Festival (MIF), the London National Theatre, Shakespeare's Globe, the Royal Opera House, Sadler's Wells, the Southbank Center, Piccolo Teatro di Milano, MAXXI Museum and the BOZAR Center for Fine Arts. The Istanbul Foundation for Culture and Arts (IKSV) serves as the projejct's Turkish producer.

Over the course of the festival, Amal will be visiting 65 cities and attending over 120 events. Three puppeteers will operate Amal, designed by Handspring Puppet Company, during her journey. One puppeteer will control Amal's face and body, while the other two will be in control of her arms. A team of 10 puppeteers, two of whom have refugee backgrounds, will accompany Amal during her four-month journey.