Relics of Gaziantep's heroism on display at December 25 Museum 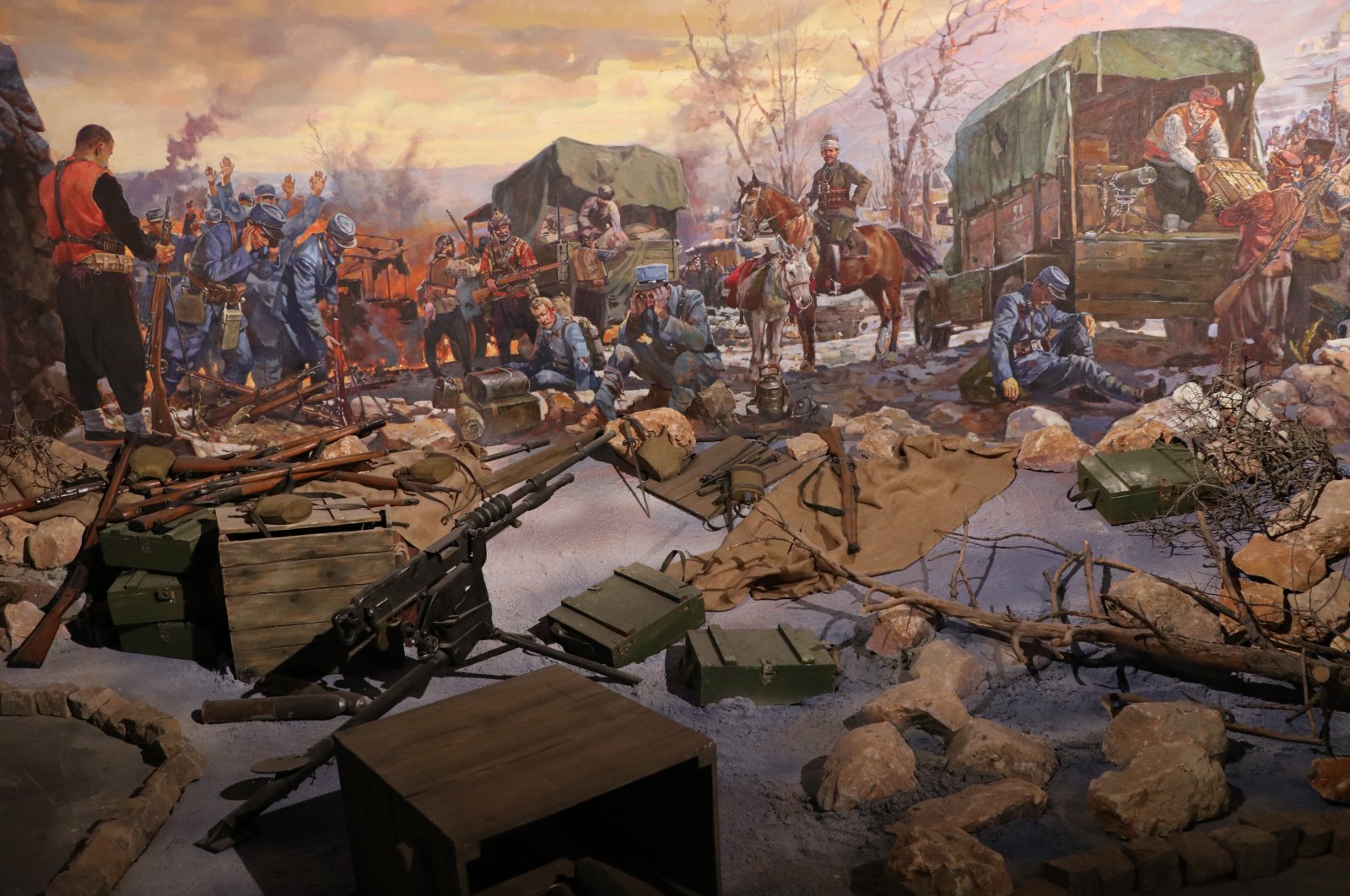 The Panorama December 25 Museum depicts the city's struggle during the War of Independence with oil paintings by Alexander Samsonov, in Gaziantep, southeastern Turkey, Aug. 26, 2020. (AA Photo)
by DAILY SABAH WITH AA Aug 27, 2020 11:35 am
Edited By Irem Yaşar

The Panorama December 25 Museum in southeastern Gaziantep gives visitors a glimpse of how valiantly the city fought during the Turkish War of Independence with a plethora of displays, documents and items dating back to that time.

The Turkish War of Independence was fought from May 1919 to July 1922 against Greece, Armenia, France, the U.K. and Italy after parts of the Ottoman Empire were occupied by Allied forces after World War I. Gaziantep was at the heart of the southern front of the war against the French occupation of southern Anatolia, which was also backed by local Armenian militia groups. The city was occupied by the French in April 1919, only to be driven out a year later by Turkish irregular "National Forces." Reinforced by troops from occupied Syria, a French military column laid a 10-month-long siege to the city, causing great damage and civilian casualties. The staunch resistance performed by irregulars prompted the Grand National Assembly, the main body of the Turkish National Movement during the War of Independence which went on to become modern day Parliament, awarded Antep with the honorary title "gazi," or veteran. However, this move was only symbolic as the city surrendered on Feb. 9, 1921. As Turkish National Movement grew in strength and proved successful in Western and Eastern fronts, The French government struck a deal with Ankara and ended their occupation in most Turkish-majority regions claimed by the National Pact, with last French soldiers leaving on Dec. 25, 1921.

Organized by the Gaziantep Metropolitan Municipality, the museum was designed by a commission composed of historians, chamber representatives, nongovernmental organizations (NGOs) and public officials, to preserve the story of the city's defense for posterity.

The museum, based in Gaziantep's Seferpaşa neighborhood, is comprised of four chambers lined with oil paintings by Russian painter Alexander Samsonov, documenting the period. It also includes items donated by war veterans and relatives of the fallen and doors and windows from buildings shattered during the turmoil, as well as weapons and clothing from the time.

In an interview with Anadolu Agency (AA), Bekir Sıtkı Severoğlu, director of the history board of the Panorama December 25 Museum, said that he joined the project on a voluntary basis as both of his grandfathers were some of the many who joined in the struggle.

Underlining the legendary status of the defense of Gaziantep, Severoğlu noted that the struggle was waged by the entire city and was a unique example of strength and resolve against the invading French and British.

He stated that the people of Gaziantep had long dreamed of a museum that could preserve the memory of the fight, adding that the museum would serve as a kind of school where World War I, the War of Independence and the city of the time could be taught about.

Severoğlu said the museum will be of great importance for commemorating those who gave their lives in the conflict. “We have thousands of martyrs to hold dear, but we do not even know some of their names. This museum is very important. Here, we will be able to keep their memory alive. It's thanks to them that we can live on this land," he said.

The museum will also contribute to the unearthing of many historical events, the director said. “This museum is crucial for its social value and its ability to help teach young people about what happened. All the events we have depicted in this museum are based on documents belonging to both the enemy and the Turks. We will present a number of facts in the museum, which show what the French did in this city. The French authorities will come to apologize to the people of Gaziantep when they see what is shown here," he said.

Touching on the large role Gaziantep played in the War of Independence, Severoğlu said: “The city was at the heart of the southern front of the war. There was a unique struggle in Adıyaman, Kahramanmaraş, Adana, Hatay, Kilis and Şanlıurfa here. There was a more protracted, monthslong resistance in Gaziantep, in particular. The French went to great lengths to seize this city. When we examine the French newspapers and magazines of that time, we see that they wanted control of the city at all costs. There are reports written by French officers saying that it would only be possible to dominate the region through the domination of Gaziantep.”

Severoğlu said visitors can learn many lessons and new information at the museum. “The building housing the Panorama December 25 Museum used to serve as a warehouse and later as a gendarmerie space. When you enter the museum, you can see a map from the year 1920. We also have on show outfits worn by the British, the French, the civilian population, as well as the Senegalese and the Algerian legionnaires from a century ago. A total of 14 oil paintings are on display showing 14 different incidents based on enemy documents," he said.

He noted that the museum is easily accessible and will add to the dynamism of tourism in Gaziantep. “Visitors will not encounter a throng of tourists. There will be no stampede. We can easily welcome 1 million tourists a year. After leaving the museum, visitors can also tour the town to see buildings that stood throughout the conflict," Severoğlu said.

“We will showcase the defense of Gaziantep with visual and animated effects. There will also be smoke, sound and sensory effects, such as the smell of a medical tent and gunpowder. One will be able to enjoy the sound of the water flowing beneath the Elmalı Bridge and we have a number of bushes and stones collected from the site. We also have architectural works from the time," he said.

Severoğlu said the opening date of the museum will be determined in line with the developing COVID-19 outbreak in Turkey.