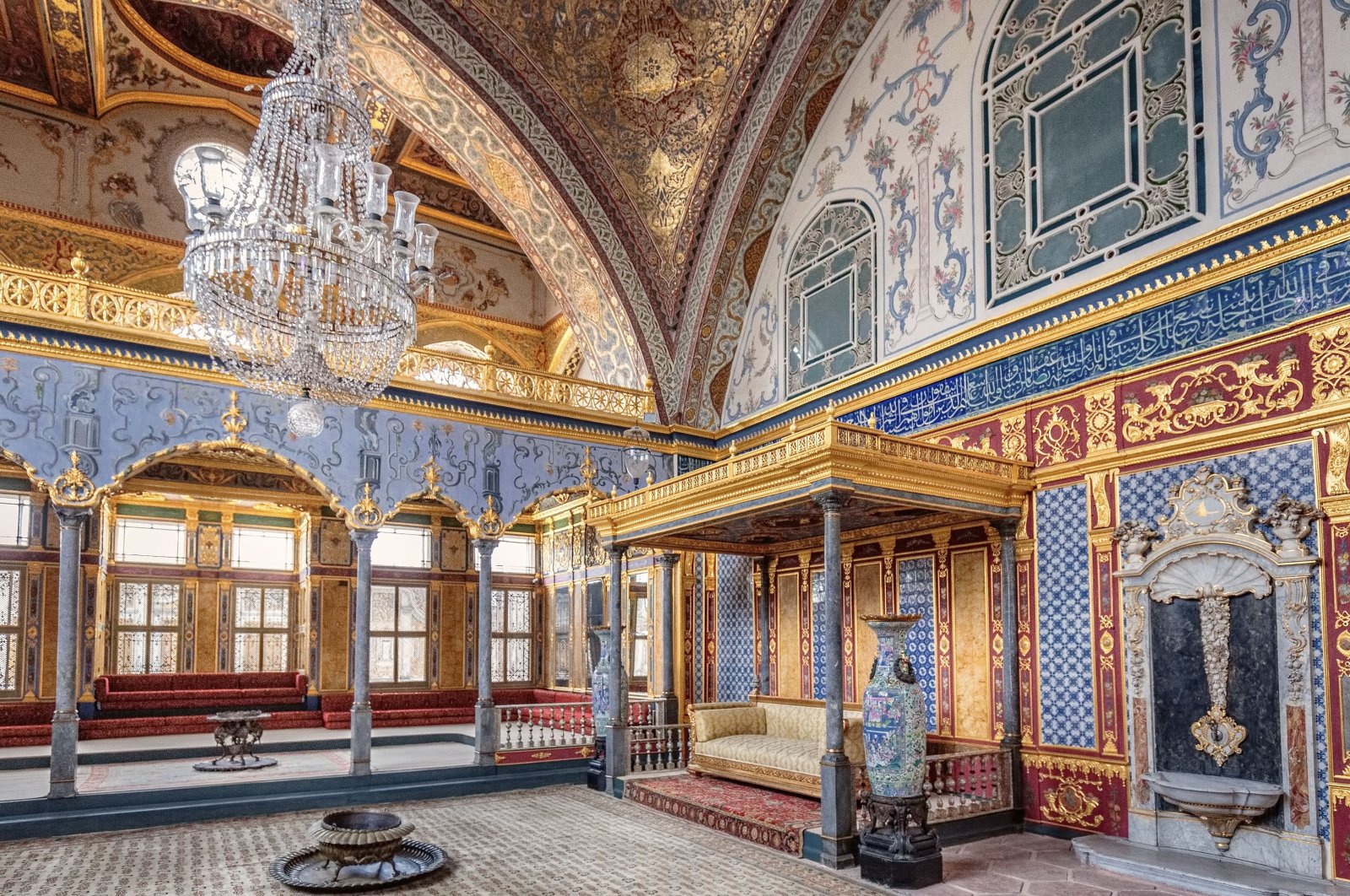 Topkapı Palace is one of the museums available for virtual tours. (Ruslan Kaln / iStock Photo)
by DAILY SABAH Mar 19, 2020 2:53 pm

While Turkish museums and cultural sites are temporarily closed to prevent the spread of the coronavirus, art enthusiasts will be able to visit on virtual tours via their computers or smartphones

As social distancing and self-isolation become essential precautions to curb the cases of COVID-19, Turkey has temporarily closed all public libraries, schools and universities, halted events and public activities, postponed foreign visits and barred spectators from sports events, to reduce crowded situations in which transmission could be boosted. The country has also closed museums and cultural sites during this time.

However, enthusiasts don't need to keep their distance from art during this period. Turkish museums and cultural sites are opening their doors digitally to people across the globe. To turn the self-isolation days into an opportunity, you can visit many Turkish museums with virtual tours that are available via computers or smartphones. Those concerned can access a myriad of museums, palaces, mosques, churches, monasteries and fortresses listed under Turkey's Culture and Tourism Ministry on ktb.gov.tr. Some of these sites include the Museum of Anatolian Civilizations, Hagia Sophia Museum, Ephesus Museum and Zeugma Mosaic Museum. The renowned Dolmabahçe and Topkapı palaces are also among those museums available for virtual tours.

Meanwhile, Google Art & Culture also provides tours to over 500 museums and galleries worldwide, including the British Museum, Louvre Museum and the United States National Art Gallery, on artsandculture.google.com. Pera Museum and Istanbul Research Institute are two important institutions that you can visit through Google Art & Culture from Turkey. They now offer their collection exhibitions and periodical exhibitions online as both institutions will be closed to visitors through March 31.

Pera Museum and the Istanbul Research Institute are bringing home the healing power of art with their digital exhibitions in these days of minimal social contact and urban circulation to reduce the risk of spreading the virus. Those seeking a dose of art can explore the works in Pera Museum’s collection of the Suna and İnan Kıraç Foundation as well as extraordinary exhibitions that hold Istanbul’s urban culture under the microscope, down to the last detail through Google Arts & Culture platform, and go on a virtual tour in the exhibitions “Intersecting Worlds: Ambassadors and Painters” and “Osman Hamdi Bey” with 360-degree images.

In addition to Pera Museum’s collection exhibitions of “Portraits from the Empire,” “Istanbul: The City of Dreams” and “Coffee Break;” “Language of the Wall,” one of the most comprehensive exhibitions on graffiti in the world, and “Summer,” which brings together the colorful works produced by children in Pera Learning workshops, are being presented to visitors in the digital environment.

The exhibition “Portraits from the Empire,” where nearly 60 works selected from the Suna and İnan Kıraç Foundation’s Orientalist Painting Collection are presented, brings the audience face to face with physiognomies of the people of the Ottoman world, which are sometimes very familiar and sometimes almost foreign. The exhibition “Istanbul: The City of Dreams” presents the daily life and views of Istanbul in the Ottoman Empire from the 17th to the early 20th century. The show, which has been designed in three main sections, extends from the life at home and private spaces to the urban area and to the general views of Istanbul. These two exhibitions, which have been released in recent years, can only be watched digitally now. At “Coffee Break,” the latest collection that the museum has carried to Google Arts & Culture, viewers can witness the historical adventure of coffee accompanied by artifacts from the Kütahya Tile and Ceramics Collection.

“Language of the Wall,” which opened to visitors in 2014, is the first exhibition devoted to graffiti and street art in Turkey. The exhibition, curated by Roxane Ayral and hosting more than 20 artists from countries, has created a new platform for discussion by carrying graffiti from the street to the museum.

Pera Learning's “Summer” exhibitions, organized since 2017, consist of objects created by children aged 4-12 in summer workshops. Following their exhibition at the museum, little art lovers are sharing their work digitally with a broader audience.

Seven stories on the city of seven hills

On the other hand, the Istanbul Research Institute has the exhibitions “The Four-Legged Municipality,” “The Şişli Mosque,” “Taksim,” “Impressions from Afar,” “Journey to the Center of the East,” “Wooden Istanbul” and “Long Stories,” which attracted great attention when they opened, through Google Art & Culture.

The exhibition “The Four-Legged Municipality” sheds light on the adventure of stray dogs, which have been an important part of everyday life in every period of Istanbul's social history, changing through religious, political and sociological transformations. The exhibition “The Şişli Mosque: An Ottoman Building in the Early Republican Era” introduces the first monumental religious structure of Istanbul of the Republican era with photographs and texts.

“Journey to the Center of the East 1850-1950” tells the Istanbul-oriented story of the journeys that Westerners made to the East since the 18th century due to their various fields of interest. “Impressions from Afar” consists of works by Luigi Mayer, who came to Istanbul in the 18th century with British Ambassador Sir Robert Ainslie, and his wife Clara Barthold Mayer, whom he met there, painting picturesque images of the city.

“Wooden Istanbul,” which features examples of wooden housing architecture such as the Summer Residence of the German Embassy, Kayserili Ahmed Paşa Mansion and Zeyrek district’s houses, and “Long Stories,” which focuses on the historical topography of Istanbul through the panoramas of Antoine-Ignace Melling and Montagu B. Dunn are other exhibitions which the Istanbul Research Institute has brought to the digital environment. “Taksim: The Heart of Istanbul,” one of the leading exhibitions on the platform, sheds light on the changes and transformations that Taksim Square has undergone from the 19th century to 1960 through photographs, engravings and maps as well.

English and Turkish texts, as well as a large number of visual materials regarding the exhibitions, can be accessed through Google Arts & Culture.