Whirling dervishes to perform Sema without audience due to pandemic 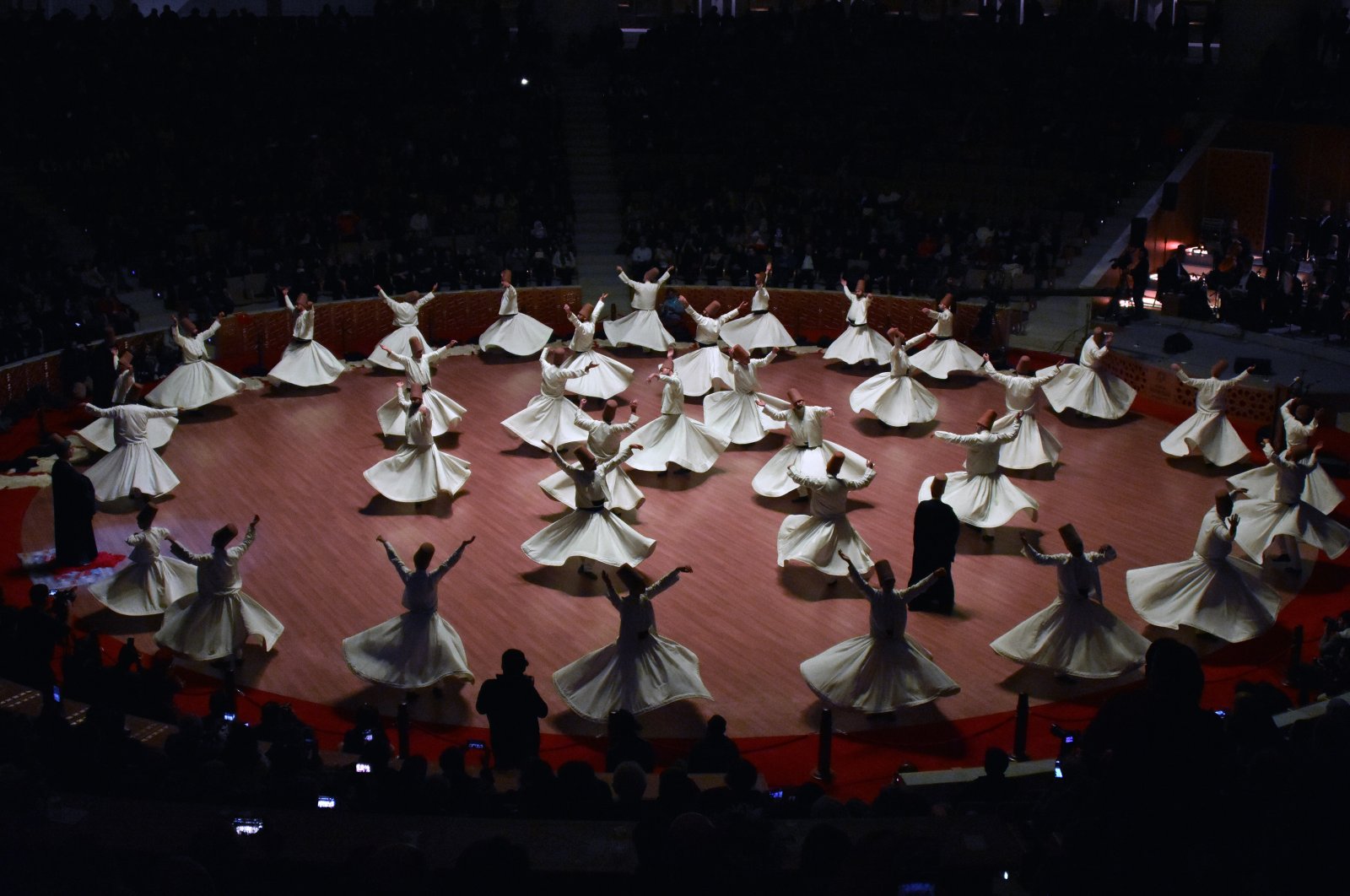 Whirling dervishes perform the Sema during a past Şeb-i Arus ceremony in Konya in this photo handed out on Dec. 5, 2020. (AA PHOTO)
by Anadolu Agency Dec 10, 2020 9:25 am
RECOMMENDED

Turkey's whirling dervishes, followers of the 13th-century Islamic scholar, poet and Sufi mystic Mevlana Jalaluddin Rumi, will perform their traditional practice, the Sema, without an audience this year in light of the coronavirus pandemic.

Every year the anniversary of Rumi's death is commemorated with a ceremony in his native city of Konya in central Turkey, taking place for 10 days in December. This year, celebrations will be limited to two days, Dec. 7 and 17. The dervishes will perform without an audience for all upcoming performances going into the new year as a precaution.

Fahri Özçakıl, the dervishes' spiritual leader, told Anadolu Agency (AA): "Our hearts are with all of Mevlana's friends. I am sure that Mevlana's friends will also live this moment spiritually. This year we are experiencing the sadness of being alone."

In Turkey, Rumi is fondly remembered by his followers as Mevlana, meaning scholar, and was buried in Konya, a Turkish city visited by millions every year. Upon his death in 1273, Rumi's followers founded the Mevlevi Order, also known as the Order of the Whirling Dervishes, famous for the Sufi ritual known as the Sema ceremony.

The Sema, an indispensable part of the order, is a whirling ritual that is accompanied by music and characterized by certain rules. The ritual begins with Nat-i Sherif, a poem recited in praise of the Prophet Muhammad before the semazens make their entrance. The dervishes cross their arms across their chest and begin whirling in accompaniment to the music, taking off their waistcoats to symbolize purification and the setting aside of ego.

It is a symbolic ritual in which everything from the dervishes' movements to their clothing has meaning. The Semahane (dance hall) is a circular room designed to represent the universe, while the post on which the Sheikh, the leader of the ritual, sits is red, symbolizing the sunset and the time of day Rumi united with God (Allah). The post on which a beginner of the Mevlevi Order sits is black and only once they have completed their journey of enlightenment can they sit on a white post.

Their symbolic costumes consist of white robes and a tall hat called a "sikke." The semazens open both arms to their sides and whirl counter-clockwise as if embracing the universe. The right hand with an open palm is extended upward representing the readiness to receive God's beneficence through the path to the heart. The left hand with the palm extended downward represents the dervishes' willingness to impart God's message to those witnessing the Sema and fellow men.

In the second cycle the dervishes' entire existence is said to be dissolved within the divine unity. The ceremony concludes with messages of peace by semazens and usually finishes with a recitation from the Quran.

Described as one of the most exquisite spiritual ceremonies, the whirling of the dervishes is a highly structured act of love and faith. The Sema was declared one of the "Masterpieces of the Oral and Cultural Heritage of Humanity" by UNESCO in 2008.

When Rumi passed away he was laid to rest near his father and the Green Dome, the site of Rumi's tomb, was built later. The Mevlana Dervish Convent and Tomb opened in 1926 and became the Mevlana Museum in 1954.

Since 1937, an international commemoration ceremony marking the anniversary of Rumi's union with God, also known as “The Wedding Day” ("Şeb-i Arus"), is held in Konya every year.