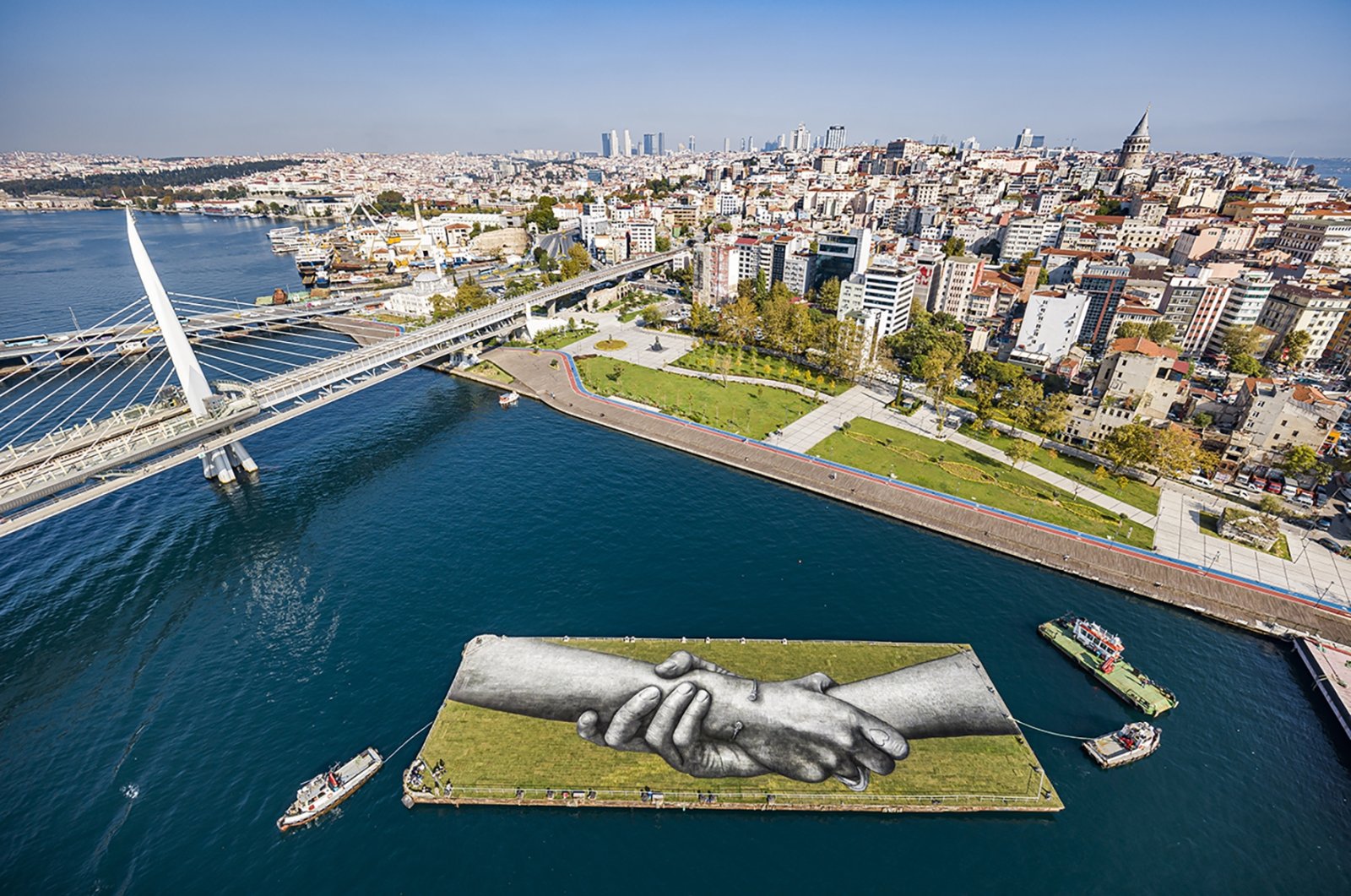 French artist Saype, whose real name is Guillaume Legros, presents his latest land-art production in Istanbul as part of his Beyond Walls project, in which he paints giant interlaced hands to symbolize the largest human chain around the polarized world.

Self-taught Saype is known today for his paintings on grass, made with eco-responsible paint, which he invented using coal and chalk. In his Beyond the Walls project, the interlaced hands that the artist paints reach out and shake united in a common effort beyond all walls separating humans and enclosing them in mental or geographical spaces. Thus, the walls erected in mentalities become fictive partitions, wiped out by artistic imagination.

Istanbul has become the eighth point where Saype painted the hands of the Beyond Walls project, inviting people to benevolence and coexistence. After bringing together the continents of Europe and Africa, the huge hands created by the French artist come to the European side of the Bosporus and reach the Asian shores. Saype painted the hands in Beykoz district, Boğaziçi University and Atatürk Bridge on the Golden Horn, alternatively known as the Unkapanı Bridge, in Istanbul with the support of Istanbul Metropolitan Municipality (IBB) Culture Inc., Beşiktaş Municipality, Bogaziçi University, the Consulate General of Switzerland, the French Cultural Center in Turkey and UPS.

The project's previous stops included Paris, Andorra, Geneva, Berlin, Burkina Faso's capital Ouagadougou, Cote D'Ivoire's Yamoussoukro and Italy's Turin. The photo exhibition of Saype's works for Istanbul will meet the audience at Taksim Sanat Gallery until Nov. 8. Also, they will be exhibited at the French Cultural Center in Turkey as of Nov. 7.

Speaking to Anadolu Agency (AA), Saype said that art is an important tool in communication, and this is why he conveys his message to people through art. "In the conjuncture we are in, people started to become more polarized and more alienated. I wish my work will have a significant impact. I aim to support people's efforts to come together and do something together.”