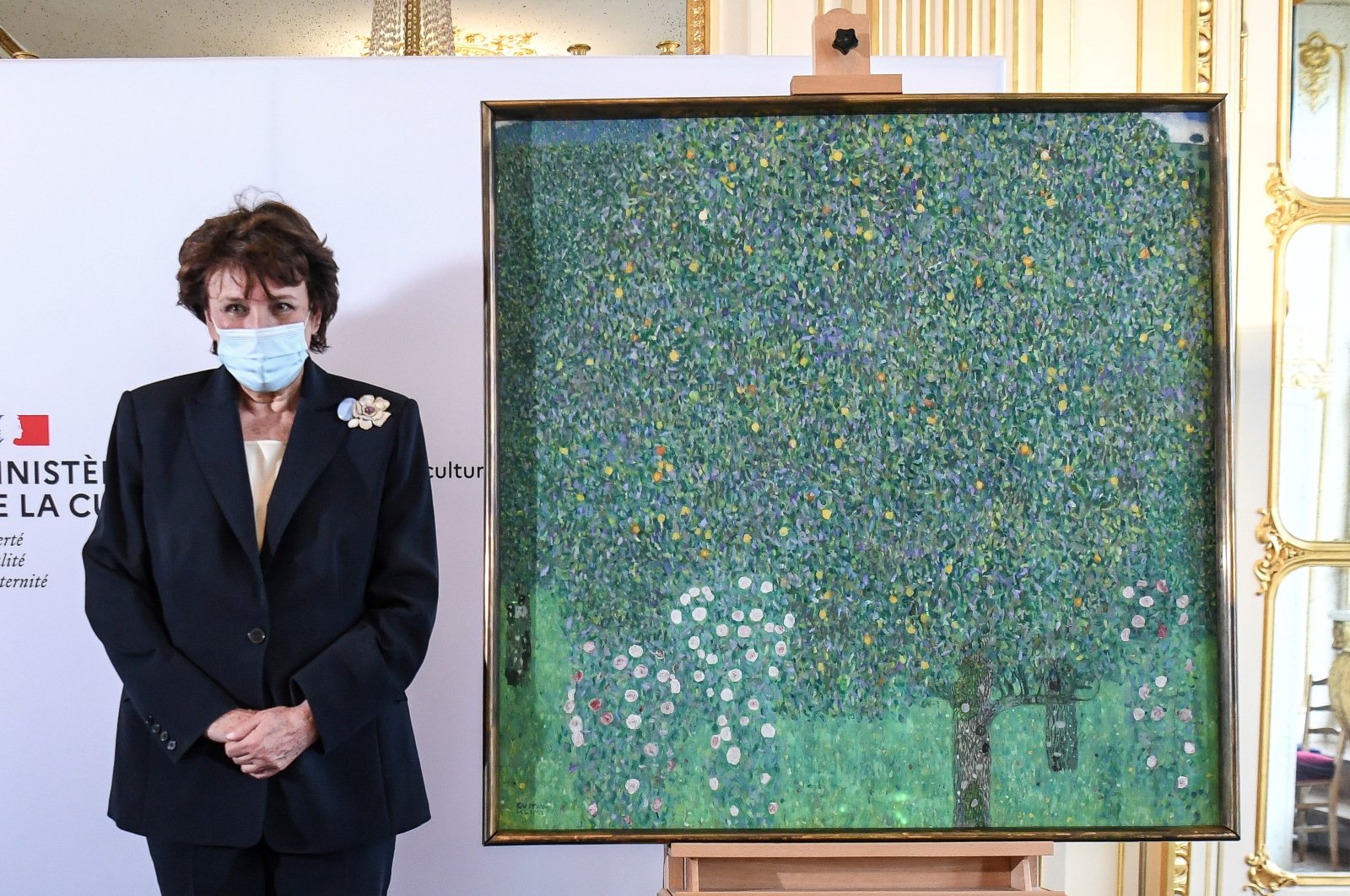 French Culture Minister Roselyne Bachelot poses next to a spoiled oil painting by Gustav Klimt painted in 1905 called "Rosebushes under the Trees," during a ceremony at the Orsay museum in Paris, France, March 15, 2021. (AP Photo)
by Agencies Mar 15, 2021 10:01 pm
RECOMMENDED

The French government announced Monday that it will return a Nazi-looted Gustav Klimt landscape painting to its rightful owners more than 80 years after it was stolen from a Jewish family in Austria in 1938.

The colorful 1905 oil work by the Austrian symbolist painter titled "Rosebushes under the Trees” has been hanging in Paris’ Musee d’Orsay museum for decades.

French Culture Minister Roselyne Bachelot-Narquin told a Paris news conference that "the decision to return a major work from the public collections illustrates our commitment to the duty of justice and reparation vis-à-vis plundered families.”

The oil work will be returned to the family of Nora Stiasny, a Holocaust victim who was dispossessed during a forced sale in August 1938, reported The Associated Press (AP). She was deported to Poland in 1942 and died the same year.

Bachelot said that French authorities hadn't initially identified the painting as being stolen by the Nazis, and its provenance only recently came to light after French government-led investigations on the issue.

Stiasny had inherited the painting from her uncle, Austrian industrialist and art collector Viktor Zuckerkandl, who bought the work in 1911, Bachelot said.

After Stiasny sold the piece, the art dealer, a Nazi sympathizer, held onto it until his death in the 1960s, reported Reuters. France, unaware of its history, eventually bought it at auction for the Musee d'Orsay in Paris in 1980, the minister added.

"It is in recent years that the true origin of the painting has been established,” she said, adding that it was "the only Gustav Klimt painting owned by France.”

"'Rosebushes under the Trees' is a testament to the lives that a criminal will has stubbornly sought to eliminate,” she noted.

Thousands of artworks looted by the Nazis across Europe wound up in French museums after the Allies defeated Nazi Germany in 1945.

Though many have been returned, French authorities have stepped up efforts in recent years to find homes for the scores of hanging heirlooms that remain unclaimed.