From Pink Mosque to Turkish rooms: Traces of Ottoman influence in European architecture 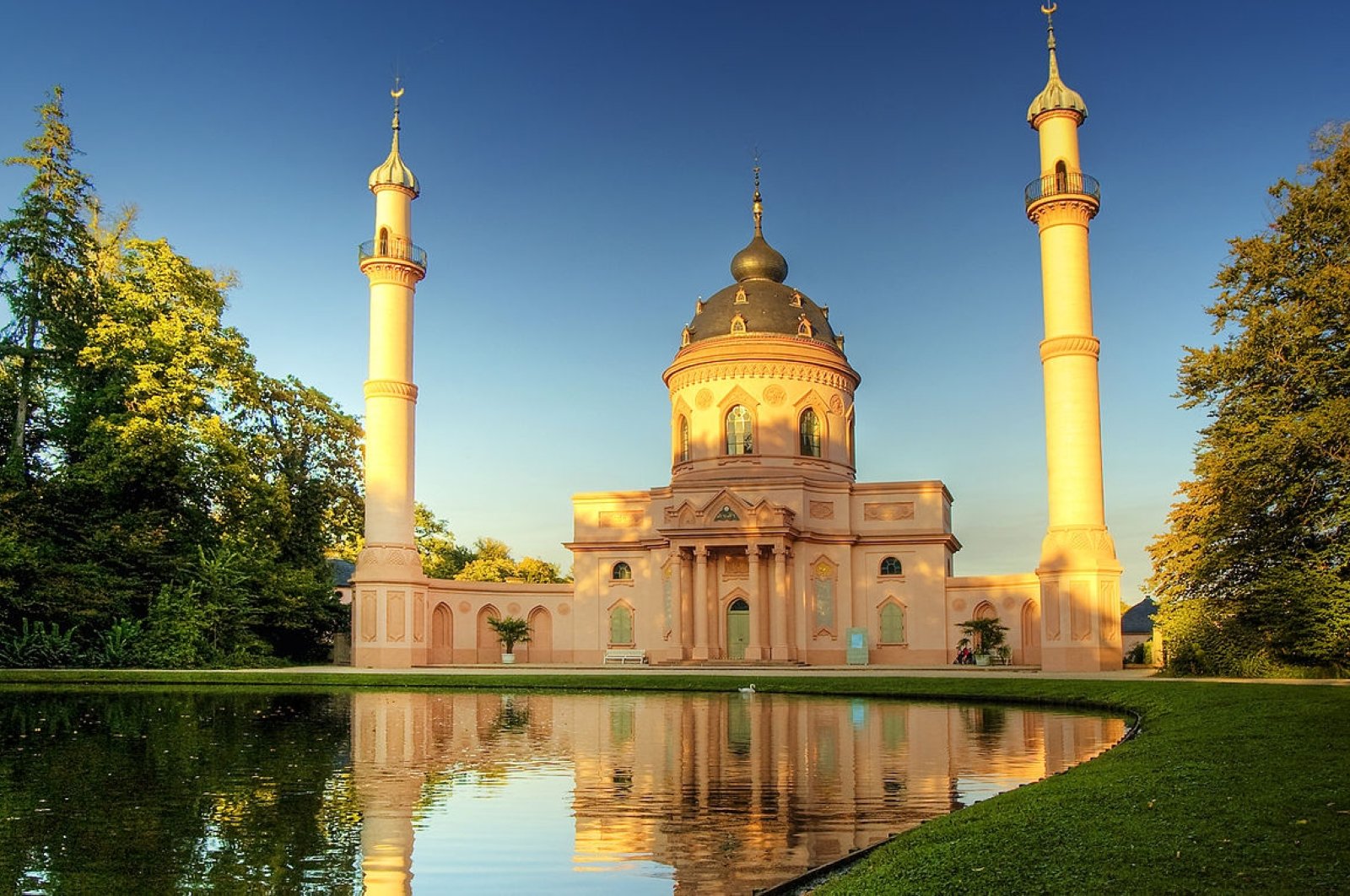 The 18th century was a period of great acculturation between the Orient and the West. The first thing that came to mind when the Orient was mentioned in Europe was the Ottoman Empire. The rise in Franco-Ottoman trade relations during the reign of Sultan Suleiman I (aka Suleiman the Magnificent) was a positive development – for until this time, the empire was one which provoked fear in Western minds.

The failure of the Siege of Vienna (1683) meant that Ottoman territory reached its natural borders. Following the battle, new conquests stopped, and the period of protection of existing lands began. Fear of the empire was giving way to curiosity.

The visits of Ottoman ambassadors to France in the 1700s was effective in securing the Ottomans’ powerful influence over European culture. The main factor that prompted the rise of Turquerie, or Turkish fashion, was the arrival of Ambassador Mehmed Çelebi, known by the nickname "Yirmisekiz" (“Twenty- Eight” in Turkish), who was sent to France in 1721.

The period that historians refer to as the Tulip Era was the peak of culture and arts in the Ottoman Empire. Even the motifs of this period, shaped by representations of the tulip alone, had far-reaching impacts on the West.

Mehmed Çelebi and his entourage reflected all elements of the refinement of Ottoman aesthetics. With his visit, Turkish fashion made a splash in Paris. In a later period, the trend that started in Paris engulfed the whole of Europe so much so that admiration for the Ottomans materialized with the establishment of the Divan Club, a short-lived dining club with membership open to gentlemen who had visited the Ottoman Empire, in 18th-century London.

Today, we see traces of Turquerie in many artworks – from painting to music and from architecture to decoration.

Turkish armies left behind tents, weapons and many valuable items after the Battle of Vienna. These objects began to be collected with great interest by the European nobility. Later, they would start exhibiting their collections of Turkish items.

First, Frederick Christian, the Prince-Elector of Saxony, exhibited his family's Eastern-style weapons collection in a specially designed part of the Residenzschloss Dresden (Dresden Castle or Royal Palace) in Germany. These items fueled curiosity for the Orient in Europe, causing other rulers to follow the prince's path. Thus, a long-term fashion of creating Turkish-themed interiors began.

The specially designed rooms contained Ottoman booties left over from the war. Europeans did not just display their Ottoman collections in one room – they also began to use Ottoman decoration style and materials in their own countries by imitating those of the Orient.

One of the hallmarks of Ottoman civilization is the traditional home. These houses appeared in cities where the state was centralized after the 17th century in Ottoman lands, with particular shared spaces, facades and interior designs. Surely, the designs of these houses attracted the attention of the Europeans who came to visit the country.

The concept of rooms in the Ottoman lands took on the same aim as the yurt of nomadic periods. Just as yurts were equipped with all functions, with areas for seating, resting, preparing food, eating and warming up, rooms were adapted to perform all of these functions with as smooth a geometric form as possible. Rooms were divided based on religious sensitivities allowing men and women to sit separately. Accordingly, there was a "selamlık" area at the entrance for men to be seated. The host welcomed male guests in these exclusive rooms. In the back, meanwhile, was a "haremlik" where women could sit. This area was connected to the selamlık and garden. Plus, the traditional home had high garden walls so that women could move around more freely.

Ottoman designers had gathered and refined these traditions over the four to five centuries since the empire’s establishment. In the 18th century, Thomas Sheraton, a furniture designer and decorator, referred to the engravings seen in Turkish seating and interior decorations in his book “The Cabinet Maker and Upholsterer’s Drawing Book.”

Indeed, famous French queen Marie Antoinette, who was killed in the aftermath of the French Revolution of 1789, had her own Turkish room built at Chateau de Fontainebleau. Although European form and style were used in the room, it is evident that Ottoman motifs and patterns were heavily employed.

The gold-gilded branches in the marble fireplace and the compositions of relief-patterned leaves and flowers placed in the niches highlight Turkish motifs.

Also, the turban came to be a symbol of the Turks in the details of the decoration of the room. In addition, the element of ivy relief ornamentation around the niche was one of the most common features of 18th-century Ottoman architecture. When examined in detail, it is possible to see traces of the Ottoman Empire in many more details.

The French Revolution put an end to Turquerie in France. This room was the last witness of Turquerie in the 18th century. After many years of restorative work, however, it is now open to visitors.

Paintings reflecting its Ottoman roots add a distinct atmosphere to the interiors. Envoys and travelers who went to the Ottoman Empire for diplomatic purposes were asked to bring Oriental-themed paintings. These paintings were collected for decoration, but today most of them have become more of artifacts that record history. While landscapes were used in the Ottoman palaces in the period, in Europe, it was Turkish figures that were depicted.

French subject painter Charles-Andre van Loo's paintings had a place in European decoration in this sense. The artist kept Turkish elements in the foreground in many of his works. The overdoor decorations he made in the castle of the Jeanne Antoinette Poisson, who was the Marquise of Pompadour, are an example of this as well. In this work, he embroidered the daily life of the Ottoman empire into ornaments, adding a different dimension to his own art.

Not only the paintings hanging on the walls but also the tapestry carpets came to have the Oriental themes. The arrival-departure of Mehmet Çelebi to the Tuileries Palace in Paris during his embassy in 1721 is one of the subjects depicted in these tapestry carpets.

Eighteenth-century Germany was made up of many independent city-states. One of the most notable was ruled by Charles Theodore, Prince-Elector and Count of Palatine and Bavaria. He had acted in the spirit of the Enlightenment, carrying out numerous reforms.

Theodore supported the construction of many architectural works. The Schwetzingen Palace, which was used as a summer residence by the Palatinate princes, is a particularly good example. He had a mosque built in the palace’s garden by French architect Nicolas de Pigage. No doubt this was an indication of his interest in different cultures.

Theodore was renowned for his intellectual curiosity, tolerance, education and artistic delight. He encouraged art in a way that went far beyond many in his position, bringing together distinguished instrumentalists from all over Europe under the umbrella of the “Mannheim School.” Among them were excellent figures such as Wolfgang Amadeus Mozart, famous for his “Rondo Alla Turca” (“Turkish March”). Mozart performed numerous concerts here.

Back to the pink mosque in Schwetzingen Palace – which is also known as Schwetzingen Mosque: It should be mentioned that it was for ornamental purposes and not used for worship. Completed in 1795, the work was one of the most interesting areas in the palace and added an Orientalist vibe to its garden. Only one prayer service was ever performed in the building – when Turkish workers performed the bayram (eid) prayers there on May 20, 1961.

Messages in Arabic and German are written on the walls of the mosque, saying things such as "Wealth and the world are temporary: Good deeds are eternal," "The fool considers the warning as enmity," "The thorns are watered because of the rose” and “Loneliness is better than harmful friends.” The structure welcomes visitors as a museum today.