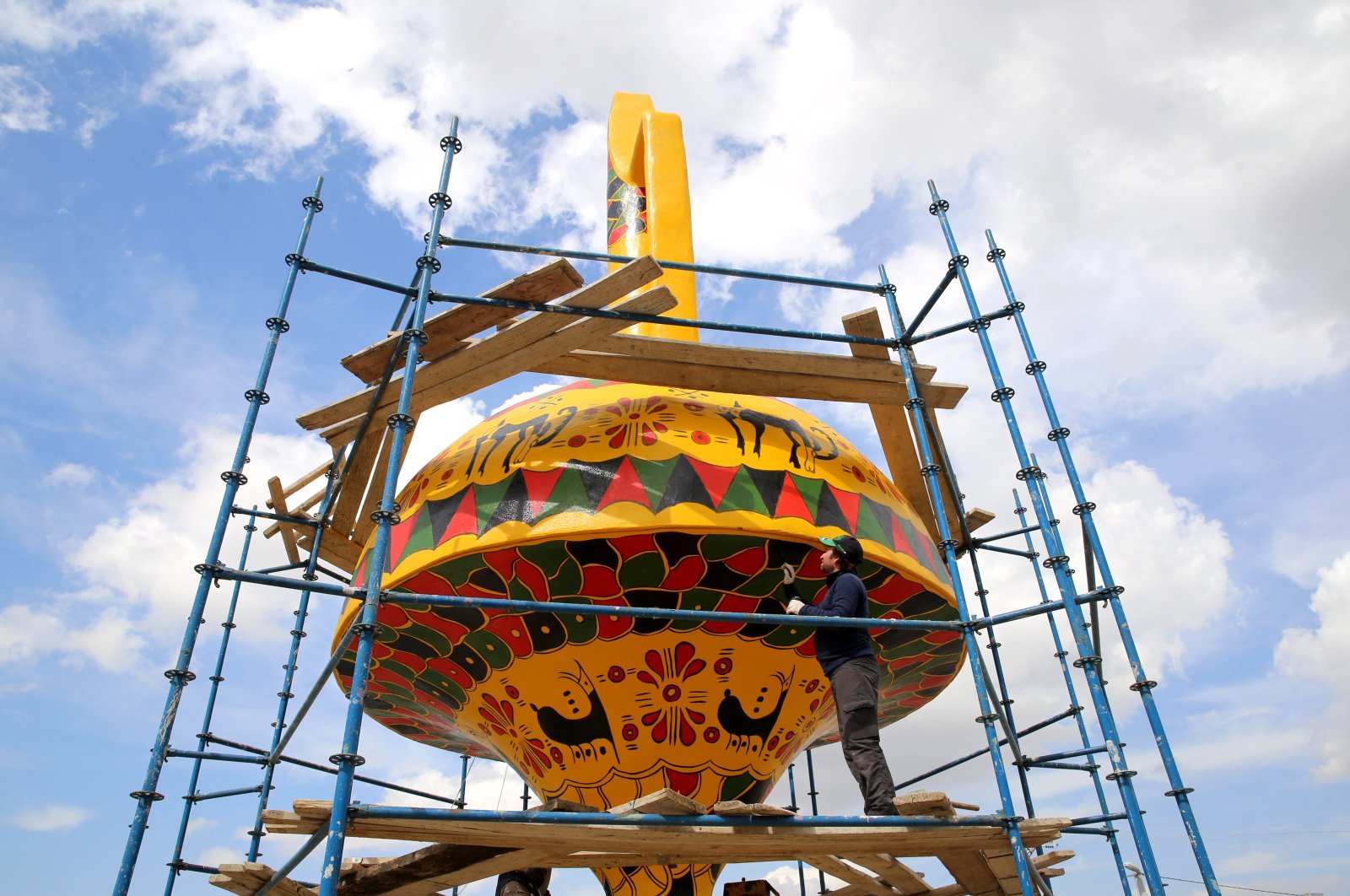 The motifs of the beaked Hittite jug bear the traces of old Anatolian civilizations. (AA Photo)
by Anadolu Agency Apr 08, 2020 11:54 am
RECOMMENDED

A beaked Hittite jug in central Nevşehir province – the biggest dish sculpture in Turkey – is being restored by experts recently. The 14-meter jug, which attracts attention in Nevşehir, one of the major regions for tourism in the country, is decorated with figures representing the civilizations that have lived in Anatolia.

The sculpture is located on the road that connects Nevşehir to Avanos district, which is famous for its handicrafts. The motifs of the beaked Hittite jug, where damaged areas are repaired with the help of a scaffolding built around it and a crane, are basically redrawn and painted.

On the epitaph of the jug, some lines belonging to Aşık Seyrani are written: "The blind know the way of Avanos, the jug is evident from the broken glass." The work reflects the history of the Avanos district where parts of earth were turned into art.

Master Şaban Topuz, who is the supervisor of the restoration project, told Anadolu Agency (AA) that the jug, made from the mud obtained from the Kızılırmak River’s old beds 15 years ago, has become one of the symbols of the district.

Saying that he and his other two friends used more than 60 liters of paint for the renovation of the jug, Topuz continued, “We are renovating the 14-meter giant jug because it is deformed due to the seasons. We have tried various paints here, but we use automotive paints in the work of painting figures and symbols as it has a more permanent feature in the summer and winter. As this work symbolizes our district, it also tells about the richness of culture and art in the Cappadocia region. Since the jugs manufactured in Avanos in the past were carried with donkeys, they were broken sometimes and dispersed on the road.” Noting that pot making is an important part of life in the region, Topuz said: “In Avanos, the profession of pot making, which has been sustained since the Hittite period, is transferred from generation to generation with the apprentice-master relationship.” Topuz added that they plan to complete the restoration work in 15 days.