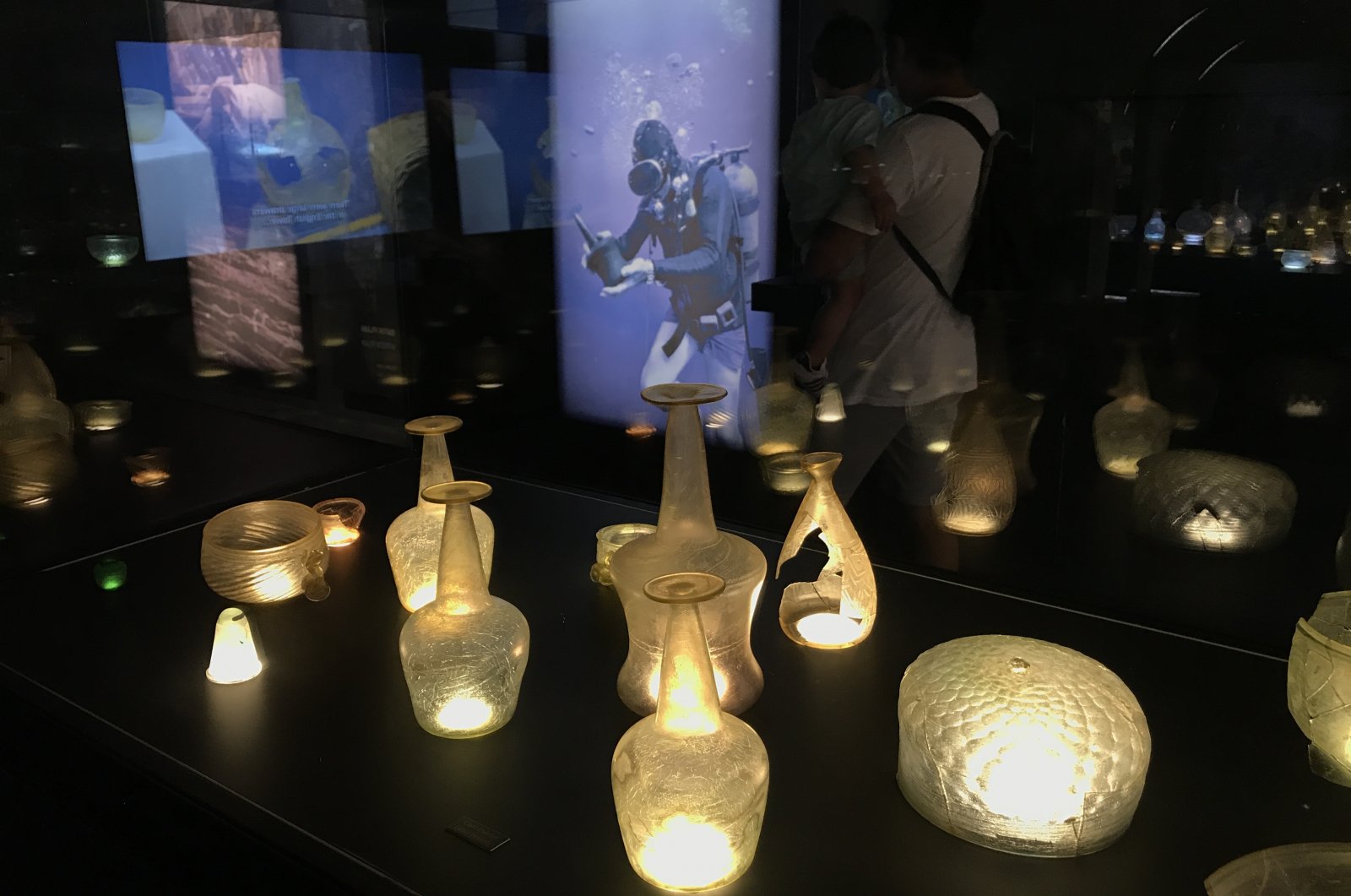 Glassware found during the excavations of the Serçe Port shipwreck are on display at the Bodrum Museum of Underwater Archaeology, Muğla, southwestern Turkey, Aug. 20, 2020. (AA Photo)
by Anadolu Agency Aug 21, 2020 11:51 am
Edited By Irem Yaşar
RECOMMENDED

The Serçe Port shipwreck, on display at the Bodrum Museum of Underwater Archaeology in southwestern Muğla province, offers a glimpse into the popular 11th-century trade route between the Middle East and Europe. Popularly called the "Glass Wreck," the exhibit hosts hundreds of items reflecting the ship’s historical and archaeological importance.

The ship is believed to have set sail from Lebanon's Port of Beirut – recently in the news following a huge blast – in the 11th century and sunk at a depth of 33 meters (108 feet) in Serçe Port, Marmaris, in southwestern Turkey. The vessel and its artifacts are on display in the new hall of the museum at Bodrum Castle, which recently underwent restoration.

Among the artifacts exhibited along with the ship are gold Islamic and copper Byzantine coins, scales, weights, lead seals, spears, and Byzantine, Bulgarian, Syrian and Sicilian pots, pans and glassworks. The items have attracted the interest of local and foreign holidaymakers.

In an interview with Anadolu Agency (AA), Tuba Ekmekçi, director of the Bodrum Research Center at the Institute of Nautical Archaeology (INA), said the wreck on display at the museum is an important large shipwreck that has provided a nice collection of Islamic glass artifacts.

Ekmekçi noted that they determined through extensive research the ship set sail from the Port of Beirut, adding: “Unfortunately before it could reach its destination, it sank at the entrance to Serçe Port in 1026. Between 1977 and 1979, archaeological excavations were carried out. Since then, the shipwreck and the artifacts recovered from the wreck have been on display at the Bodrum Castle Underwater Archaeological Museum.”

Pointing out that the wreck offers historical traces of maritime trade between Beirut, Damascus and Europe, Ekmekçi said: “This trade link between the Islamic world and the Christian world was previously unknown, though historians were aware of a trade network linking the East to the West by sea for centuries. With this wreck, the glass trade and its route were revealed. The Port of Beirut was a crucial port and trade center in ancient times. We know as a result of archaeological studies that it was a very active port where many materials from the Middle East and East were loaded and sent to the West. I am sure it is very important today as well. But the horrific blast, unfortunately, has caused serious problems. I wish a speedy recovery for all people in Beirut and Lebanon.”