Hagia Sophia, the treasure of Sultan Mehmed the Conqueror 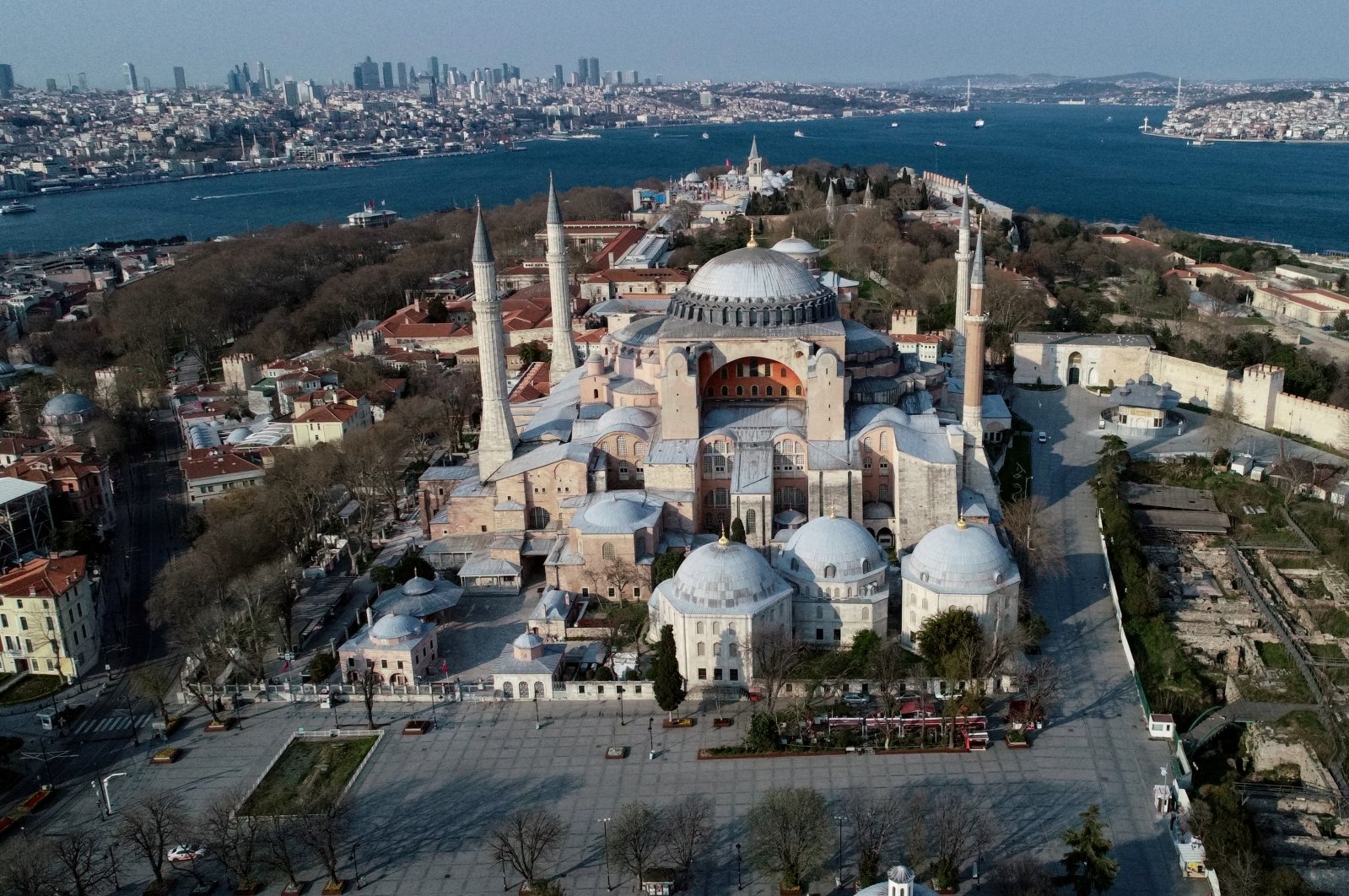 While Hagia Sophia’s potential reversion to a mosque has been on the agenda recently, let’s learn what this glorious temple meant for Mehmed the Conqueror and how he invested in this architectural wonder

May 29 is marked as the anniversary of the conquest of Istanbul for many years. Ever since it was converted into a museum, Hagia Sophia has remained an open wound in the public conscience. Every political party wanted to make it a mosque again, but the attempts were somehow left unfinished.

During this year's celebrations, the recitation of the Quran by an imam and the statements that it should be reverted to a mosque hit the agenda yet again. Everyone discussed the questions: “Will Hagia Sophia be a mosque again? If it will, when?" Meanwhile, a number of statements from Greece have sparked further controversy.

Well, what was the opinion of Sultan Mehmed the Conqueror about the situation of this temple at the center of the discussions? What would he want today if he lived?

The siege of Istanbul lasted longer than expected. The pashas asked the sultan for permission to plunder. The sultan gave his permission but only after making a final offer to the Byzantine Emperor Constantine to surrender.

Finally, on May 29, the city fell. Those who had the opportunity fled. The emperor died while defending the city in this turmoil. People rushed into Hagia Sophia with fear and panic. Thousands of people took refuge in this big temple. When it was understood that the resistance was completely broken, the army was ordered not to kill those who did not resist with arms.

When Sultan Mehmed entered the city from Topkapı, he was titled “Conqueror.” The hearsay suggests that as soon as he entered the city, he first visited Hagia Sophia. Here, thousands of people watched him anxiously, some of them weeping and begging and prostrating. The sultan invited the crowd to listen and gave a beautiful speech. He said their lives and freedoms were secure.

The victors always rule the losers. Sultan Mehmed followed a path that would transcend his age. He could have kept them all as slaves if he wanted. However, all people were granted free Ottoman citizenship. The Greek Orthodox Patriarchate was granted formal status and given special privileges. Sultan Mehmed was now the ruler of two empires.

He toured Hagia Sophia for a long time. He also climbed to the top of the temple. All historians record his admiration for the greatness of the structure. He read out a Persian poem here or, according to another version, when he visited the emperor's palace:

“In the towers of Afrasiab, the owl beats the band. At the emperor's palace, the spider acts as a janitor.”

The sultan described the view he saw. These quotes reveal that the city was devastated due to wars and corruption, especially in the Latin invasion. The legendary and dreamy city lay in ruins.

Treasure should be spent on 'beloved'

With the influence of Sufi poets such as Mevlana Jalaluddin Rumi, the classical Turkish poetry school called Divan literature began to emerge. A symbolic language is used in this school of poetry, which prevailed until the 19th century. These symbols are called “mazmun” (metaphorical statement). The symbolic meaning that many poems express is completely different from its apparent meaning.

One of the conditions of being a master poet in this school is to express a deep and wide variety of meanings in a few words. Some poets have poems that express four to five different meanings in a single poem. All this is due to the use of symbolic and metaphorical language.

Sultan Mehmed the Conqueror is considered to be one of the master poets of 15th-century Turkish literature, as well. He wrote successful examples of classical Turkish poetry under the pseudonym “Avnî.” He had a remarkable knowledge of rhetoric and is also known for his literary skills. In a poem he says:

“You acquired realms, cumulated treasures and all there is,

All be wasted if they aren’t spent on wine and beloved, O Avnî!”

Addressing himself here, he says: “O Avnî! If you don't spend all that you have, all that you've collected, all that wealth, all that property, all that treasure, on wine and beloved, it's all a waste.”

The word “wine" symbolizes the high divine love and affinity, and “beloved" symbolizes Allah and his prophet Mohammad. In other words, the sultan tells in his poem that all the material possibilities obtained are wasted if they are not spent on spiritual and sublime things.

We can make explain the poem in many ways and dive deeper into it. Just by looking at the first meaning that comes to mind, we can say that the sultan wants all his earnings to be spent on the things he loves. If he does not do this, he feels that whatever he earned is wasted.

The poem of Sultan Mehmed the Conqueror, who started a new era with the conquest of Istanbul, gains a different meaning, given that he spent his earnings in real life on Istanbul and Hagia Sophia which were his beloveds. So, the treasure and property that is not spent on them are wasted.

The concept of Islamic civilization has been formulated with the expression of the restoration of the cities and ensuring the welfare of people. It was possible that Istanbul would become beautiful again and become the main city worthy of its glory, with its people being prosperous.

The sultan immediately gave orders for the reconstruction of the city. Of course, the first job was to turn Hagia Sophia into a mosque. This was the sultan’s right. Since he was respectful of other religions and worship centers, instead of demolishing the interior architecture, he ordered new decorations on its details and made it look like a wonderful mosque. When the first Friday prayer was held in Hagia Sophia, he read out the sermon himself and made his teacher, Akshamsaddin, perform the prayer.

He invited architects and construction foremen from Anatolia and the Balkans to rebuild the whole city, from the construction of aqueducts to the repairing of roads. He always doted on the city.

After the conquest, he spent a significant part of his investments for the development of Istanbul and established a foundation for this. Hagia Sophia was one of the leading places for which the income of the foundation would be spent. The reason the building survived tens of earthquakes and challenging times is because of the care taken of its foundation and the support provided by the following Ottoman sultans.

This is one of the most established foundations in Ottoman history.

The foundation vouchers called “vakıf-name/vakıfiye” is the testament of Sultan Mehmed the Conqueror. According to the text, all the property holding that the sultan gained as war booty were counted one by one and their revenues were donated to many artifacts he built in Istanbul, especially Hagia Sophia.

Compliance with the conditions in all foundation vouchers in the history of Islam is essential. This cannot be changed until the end of the world. The vouchers contain a final statement by the founder with regard to the possibility of abuse of the foundation. In this section, the founder curses those who change the foundation with malicious intentions.

This is what Mehmed the Conqueror also did. He said that it is not halal (permissible in Islam) for anyone, who has been created by Allah, who believes in Allah and His vision, and who believes in the hereafter and His glory, to diminish, disrupt, change, alter, convert, neglect the foundation and leave it as its own and to eliminate its functions. If anyone commits any of these acts, in short, if he commits one of the superstitious acts, he is clearly committing a great haram (forbidden by Islam). The sultan continued: “Let the curse of Allah and the Angels and all mankind be upon them. Let them dwell in hell forever, and their punishment shall not be eased. No mercy for them forever. Whoever changes it after hearing it and seeing it, his sin shall be upon those who change it. Indeed, He is the Hearing, the Knowing.”

After this statement, can it be thought that Sultan Mehmed the Conqueror would like Hagia Sophia to continue functioning as a museum?