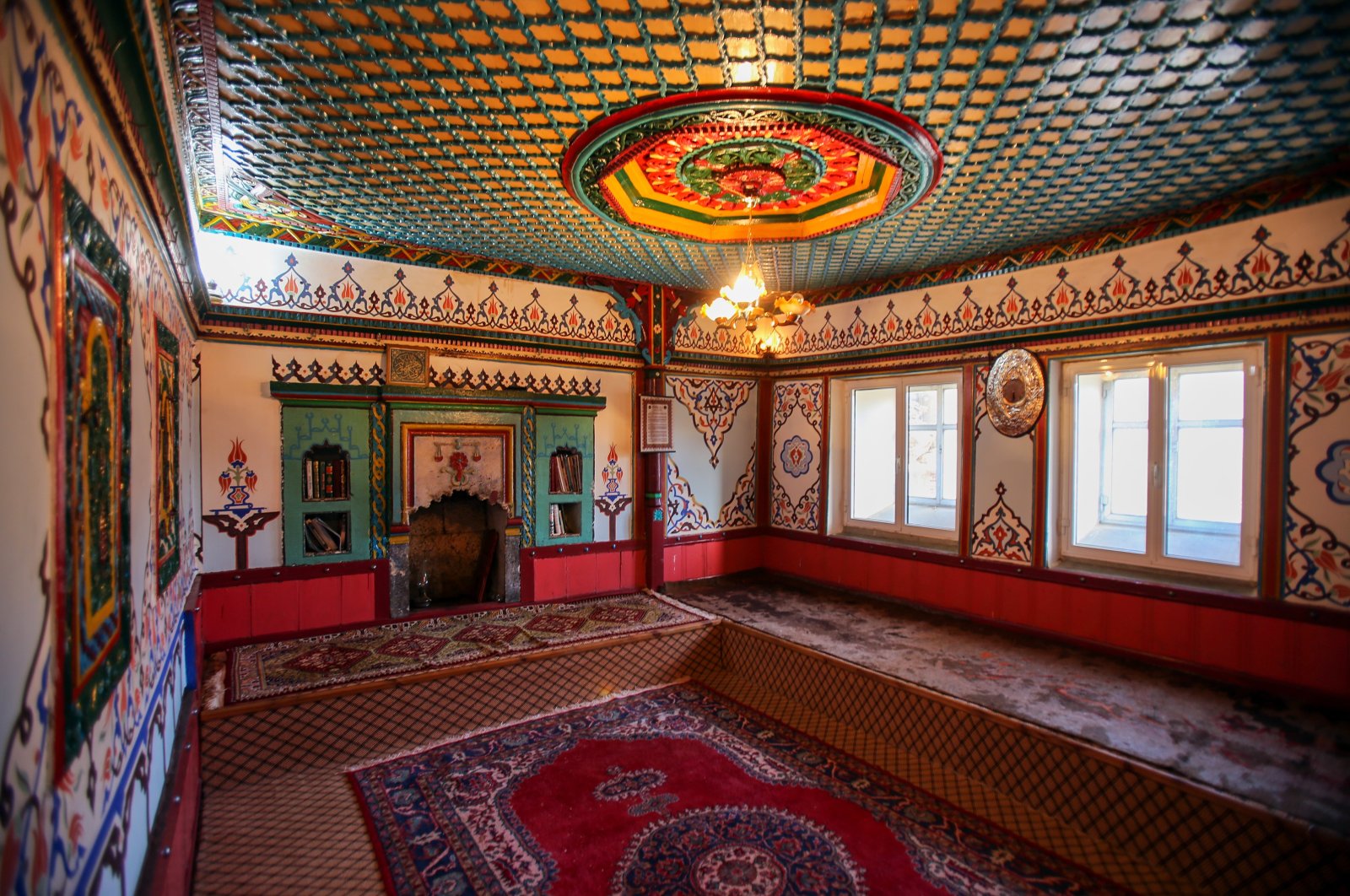 The ornate rooms are the places where social life continues in the village. (İHA Photo)
by Ihlas News Agency
Jun 29, 2020 12:00 pm

In the Sarıçiçek village of the northeastern province of Gümüşhane, guest rooms handcrafted by a master and his apprentice out of wood retain their elegance and beauty 150 years after their creation.

The rooms, located at a high altitude of 2,080 meters (6,824 feet), display examples of Turkish architecture embroidered with kündekari, the art in which small pieces of wood cut in geometric shapes are joined to form a large surface. They are considered masterpieces carrying all the elegance of folk art and wood carving to the present day.

Rumor has it that the construction of the rooms began in 1873 when a man called Hacı Ömer Ağa wanted to build a room to welcome his guests who came to the village on the caravan route.

When the rooms built by this master and his former apprentice were completed and showcased three years later, the room built by the apprentice impressed everyone, compelling the master to say: “We became an apprentice when we were a master. It is your turn to advance in this job now.” The master did not build any more buildings from that day onward.

The painting of the rooms, which have seating areas, stoves, cabinets, shelves, coffee rooms and sofas, were renewed against moths in the 1970s without destroying their original texture. The rooms have not lost any of their artistic value, reflecting their inner unity, the harmony of colors and patterns, and the finest details of the art of carving, maintaining the freshness of their original construction.

Sarıçiçek village headman Salim Gündüz, the grandson of Hacı Ömer Ağa, said that guests enjoy their stay in the village rooms, which have become an indispensable part of life in the villages of Gümüşhane, where winter nights are long. The heart of the social life of the village beats in these rooms, he said. “There are lots of visitors. They like the patterns very much. Some experts say that there are no similar rooms in Turkey. It is said that there are similar rooms in Iran, which are usually made for guests,” Gündüz said.

According to Gündüz, both the villagers and the experts who visit the village say that the room built by the apprentice is better in terms of workmanship. “These rooms in our village on the caravan route were built entirely for guests. There are horse stables underneath. Now, these rooms are our house of condolence, our guest house and our wedding hall. There is no cafe culture in our village, but the room culture continues,” Gündüz said.

“Along with the heirs of Şaban Ağa, the rooms have more than 500 heirs today. We are unable to pass on the estate because the heirs cannot come together and reach an agreement," he said, adding that this dilemma has created problems in regard to restoring the rooms. "People who come here do not like its landscaping, and they complain about the dilapidation of the rooms. Our rooms lack a bit of service. They need maintenance. We can neither restore them nor destroy them. We are expecting service and investments. These rooms are our heritage and our history.”