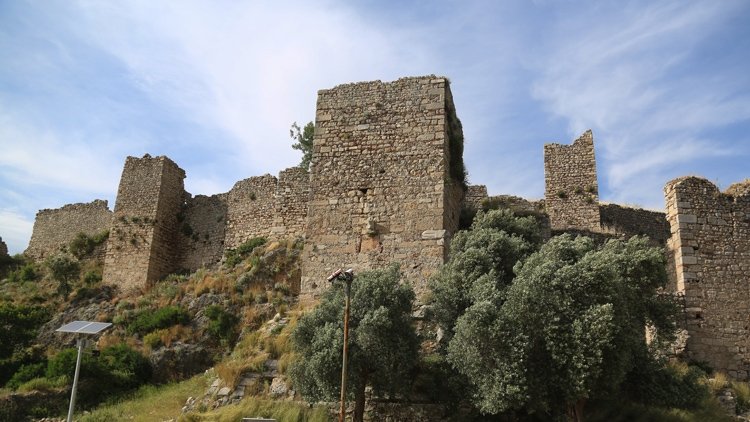 Located in the Milas district of southwestern Turkey's Muğla, the historical Bey Bath in the ancient city of Beçin will be restored to its former glory.

The bath, one of the few surviving ancient structures in the city, is estimated to be 700 years old.

The ancient city of Beçin served as the capital of the Menteşe Principality (Beylik) and is one of Anatolia's most important archeological sites. It is currently on the UNESCO World Heritage Tentative List.

Once the excavation and restoration work is complete it will make a valuable contribution to the country's tourism industry.

Head of the excavation team, professor Kadir Pektaş told Anadolu Agency (AA) that they have launched an important and comprehensive study of the Bey Bath this year. "We are doing some protective work here. The work is aimed at preventing the spill of plaster-printed ornaments in the hottest room of the bath and their preservation. We will prevent the ongoing spill, caused by centuries of sun and rain," he added.

Pektaş said after the protective measures, the restoration project will begin once it is approved by the Monuments Board. "The plaster-printed ornaments on the interior particularly show that this structure was built with greater care than the other structures. The bath is an example of the rare ornamental structures of the principalities period."

The professor said when the studies are completed, the bath could be turned into a tourist site. "It is located in one of the most beautiful areas in the ancient city of Beçin. It's got a view of the Milas Plain and the Beçin Castle. Visitors will be able to see the city from an elevated point."

Although the history of the ancient city of Beçin dates back to 2000 B.C., it gained prominence under the Menteşe Principality, which chose the city and the castle as its capital.

Beçin is now regarded as one of the most important centers among Turkish-Islamic period settlements.

Under Pektaş's supervision, a team of archeologists carries out excavation and restoration work in the ancient city. "The restoration will shed light on the social life and architecture of Beçin," said Pektaş.