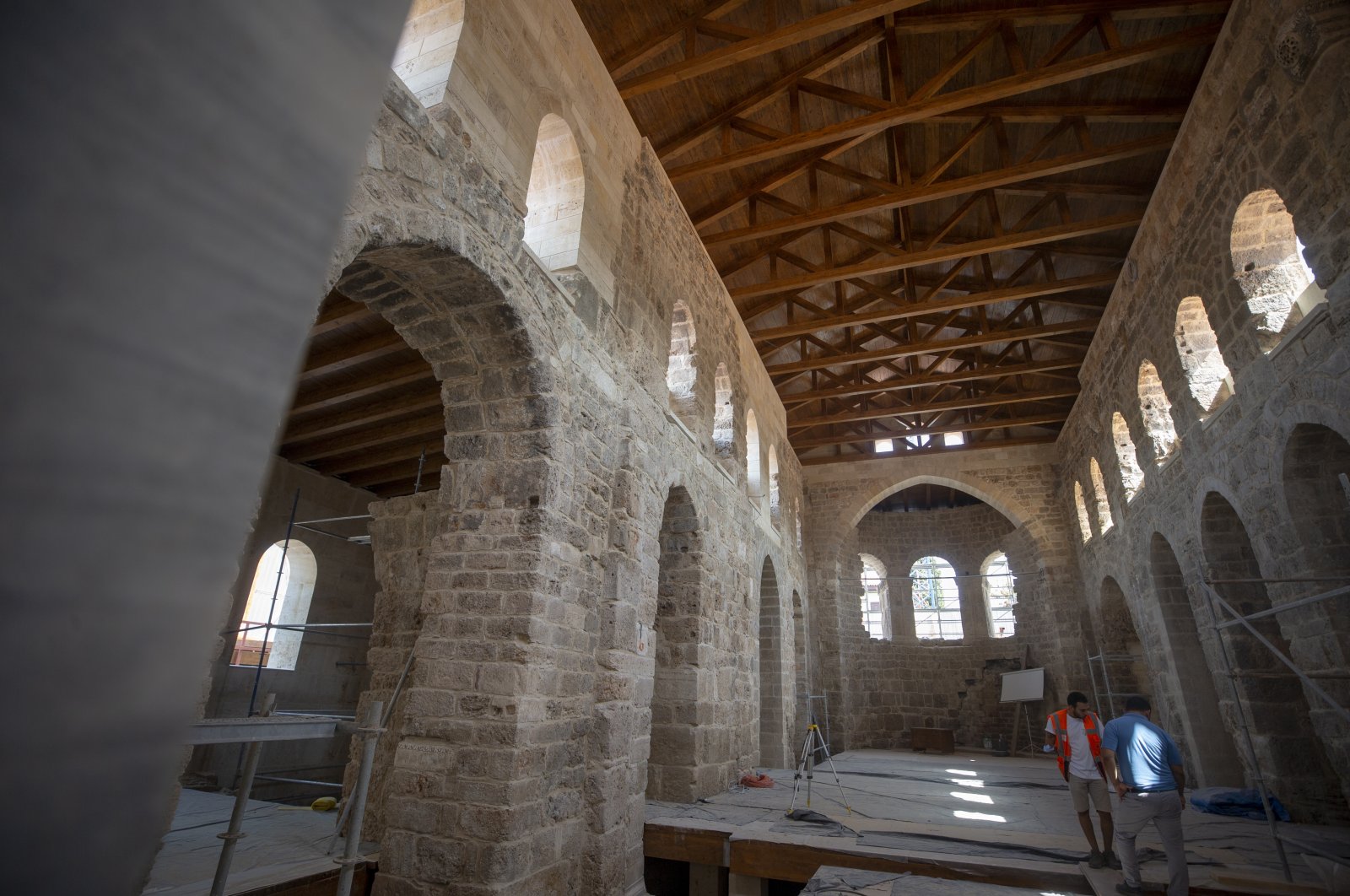 The Şehzade Korkut Mosque, located in the historic city center of the southern resort city of Antalya, is nearing its long-awaited reopening as restoration work is almost complete. Having been rendered unusable by a devastating fire, the mosque was closed in 1896. The Antalya Regional Directorate of Foundations initiated the restoration project for the mosque three years ago. Thanks to the comprehensive restoration, the mosque is regaining its former charm.

The structure in the historical Kaleiçi quarter, which bears traces of the Seljuk and Ottoman civilizations in Antalya, became a symbol of conquest when the Seljuks conquered Antalya and turned the structure into a mosque. The mosque was repaired when Şehzade (Prince) Korkut, the son of Sultan Bayezid II, was appointed as the sanjak bey of Teke during the Ottoman period. It was named in his honor.

The mosque was closed to worship after being severely damaged in a fire in 1896. Following the completion of the restoration to repair the damages in line with its original structure, the mosque will be reopened to worship on March 5, 2021, the anniversary of the Antalya's conquest by the Seljuks. It will welcome worshippers for the first time in nearly 125 years.

Antalya Regional Director of Foundations Hüseyin Coşar told Anadolu Agency (AA) that the building was turned into a mosque in 1207 as a sign of the sovereignty of Turks over Antalya and as the right of the sword.

Pointing out that Şehzade Korkut endowed the structure as a mosque, Coşar said that the mosque was open to worship until 1896, however, its minaret spire and roof were completely burned down as a result of the fire that broke out in Kaleiçi.

Explaining that the mosque was falling into ruin day by day, Coşar noted: “Over the last decade, its walls have fallen apart. Had we not restored it, it would have been completely destroyed. With the guidance of the science committee, we first carried out the consolidation work. In each work, we saw new beauties of the mosque and traces of different civilizations."

"We have revamped the project in line with all the data we received. We have worked meticulously and reached the final stage. The floors have been covered. Its roof has been tiled. We are deciding on the pattern of the carpet and the chandeliers," he said.

Coşar emphasized the mosque's special structure. “Artifacts from many civilizations, from the Roman Empire to the Byzantines, from the Ottomans to the Seljuks, can be found in this mosque. This mosque is like the cradle of civilizations."

He said the structure and the ruins surrounding it will serve as both a mosque and a museum, "where traces from many civilizations can be seen."

"Historical artifacts can be seen in glass panes both inside and outside the mosque," he said.

Coşar stated that tourists will be able to see people performing prayers as well as examine the artifacts and structures like they do in the Blue Mosque and Hagia Sophia.

He said that they have unearthed a temple with single-row columns called "monopteros" as well as tombs and inscriptions inside the monopteros during the excavations around the mosque, adding that visitors can also view this section.

Located on Hesapçı Street in Kaleiçi, the building was constructed as a Roman temple in the sixth century A.D. and was transformed into a basilica during the Byzantine period.

After the Seljuks conquered Antalya, the building was named Camii Cedid (The New Mosque). During the restoration carried out by Korkut, a minaret was added to the mosque on the sanjak bey's instruction.

In the 1896 fire, the minaret's wooden spire burned, and the mosque began to be referred to as the "truncated minaret" mosque among the people.

The structure underwent a partial restoration in 1974, and was surrounded by iron fences. Although there were attempts to restore it in the following years, the restoration work could not be initiated due to a lawsuit filed by nongovernmental organizations regarding its use as an archaeological park instead of a mosque.

Finally, the restoration work began at the mosque in 2017, under the instructions of then-Antalya Gov. Münir Karaloğlu, along with the decision of the conservation board and the scientific committee. Within the scope of the restoration work, the minaret of the mosque regained its spire for the first time in nearly 125 years.