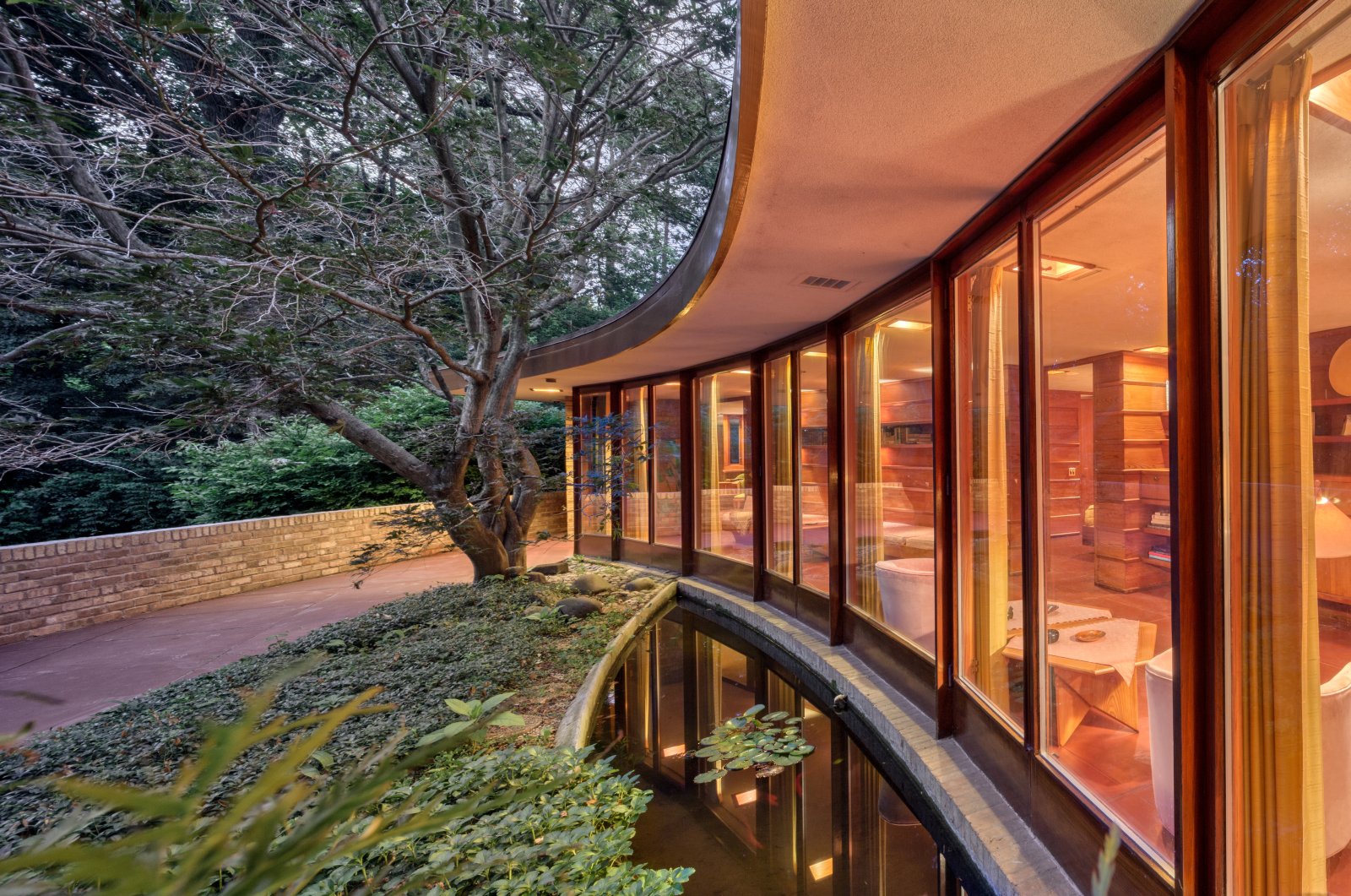 Seeking to design in harmony with humanity and the environment – what he called “organic architecture” – Frank Lloyd Wright (1867-1959) is a still well-known figure in architecture today. Wright is an institution, and his works continue to be a major draw for tourists, not least in Chicago and the surrounding area.

In Oak Park, now a suburb on the west side of the largest city in the U.S. state of Illinois, the American architect built his home and studio, which is now operated as a museum. In the house, which he completed at the age of 33, visitors can see much of what he later implemented and refined in his later buildings.

Geometric shapes dominate the comparatively small house, which bordered fields during Wright’s lifetime. The outside of the house is covered in wooden shingle-style cladding. The rooms merge and can be redesigned again and again.

As early as Oak Park, Wright created a design language that he would keep coming back to: built-in wooden furniture, geometric shapes, elaborate lead glass panes and a color palette ranging from green to gold to red, reminiscent of nature found outside.

”He used color, shapes and light to bring nature inside,” explains Felix Griggs, a Wright Trust guide who offers tours of Chicago and the surrounding area. “And he tried to place buildings in nature in a way that they didn’t interfere.” Wright not only lived in Oak Park, but he also worked there in his studio, which he added as his own wing in 1898.

It is not only Wright’s house that can be seen in Oak Park. A total of two dozen buildings can be explored on a walking tour.

Angular buildings and playing with light

The most striking is the Unity Temple. Wright built this massive, square building out of reinforced concrete. His succinct explanation: “Concrete is cheap, and my budget is only $45,000.”

As with other buildings, Wright played with the entrance, with the doors not easy to find. In the foyer, the congregation walks through a low, dark passage that he called “the cloisters” – for reflection and in preparation for the service. The sanctuary then surprises with 25 skylights made of amber-tinted glass, which makes it look like the sun is shining, whatever the weather.

This playing with the entrance can also be seen in numerous other buildings, for example, Robie House – a residential building in Chicago’s university district. It is considered Wright’s greatest example of the Prairie School and is on the UNESCO World Heritage List.

Frederick C. Robie, who commissioned the house in 1908, was a successful businessman. He wanted a modern house, with high ceilings and little wasted space, for example, with sweeping staircases.

Another of Wright’s tricks can be seen here: Rooms where people spend long periods of time are airy, light and comfortably furnished. Rooms like the entrance hall, from which guests should quickly disappear, have extremely low ceilings.

Wright in Springfield and Rockford

A different side of Wright can be seen in Springfield, the capital of Illinois. Susan Lawrence Dana, a wealthy heiress, commissioned the remodeling of her Victorian family home. The new plan of the Dana Thomas House included 35 rooms. “The rooms flow into each other, sometimes it’s just a few steps or half-storeys,” explains tour guide Muroya Mikito. The design includes more than 200 leaded glass windows, doors and skylights.

One of Wright’s last houses stands in Rockford, Illinois, and is unique: “Before he designed the Laurent House, Frank Lloyd Wright had never built anything wheelchair-accessible,” says Marybeth Peterson, Vice President of the Laurent House Foundation. Kenneth Laurent, who was in a wheelchair, had written a letter to the architect in 1948 explaining exactly what he wanted. “He didn’t want the house out of prestige, but simply because he liked the style.”

The budget was a mere $20,000 and Wright was a well-known architect at the time. “Nevertheless, he managed to design the house,” says Peterson. “He saw it as a challenge.”

And so it was designed and built – all on one level with built-in furniture and wheelchair-accessible. The color scheme was orange, green and red. The building is not as angular as Wright’s other designs – on the contrary: the entire glass front facing the park-like garden is curved.