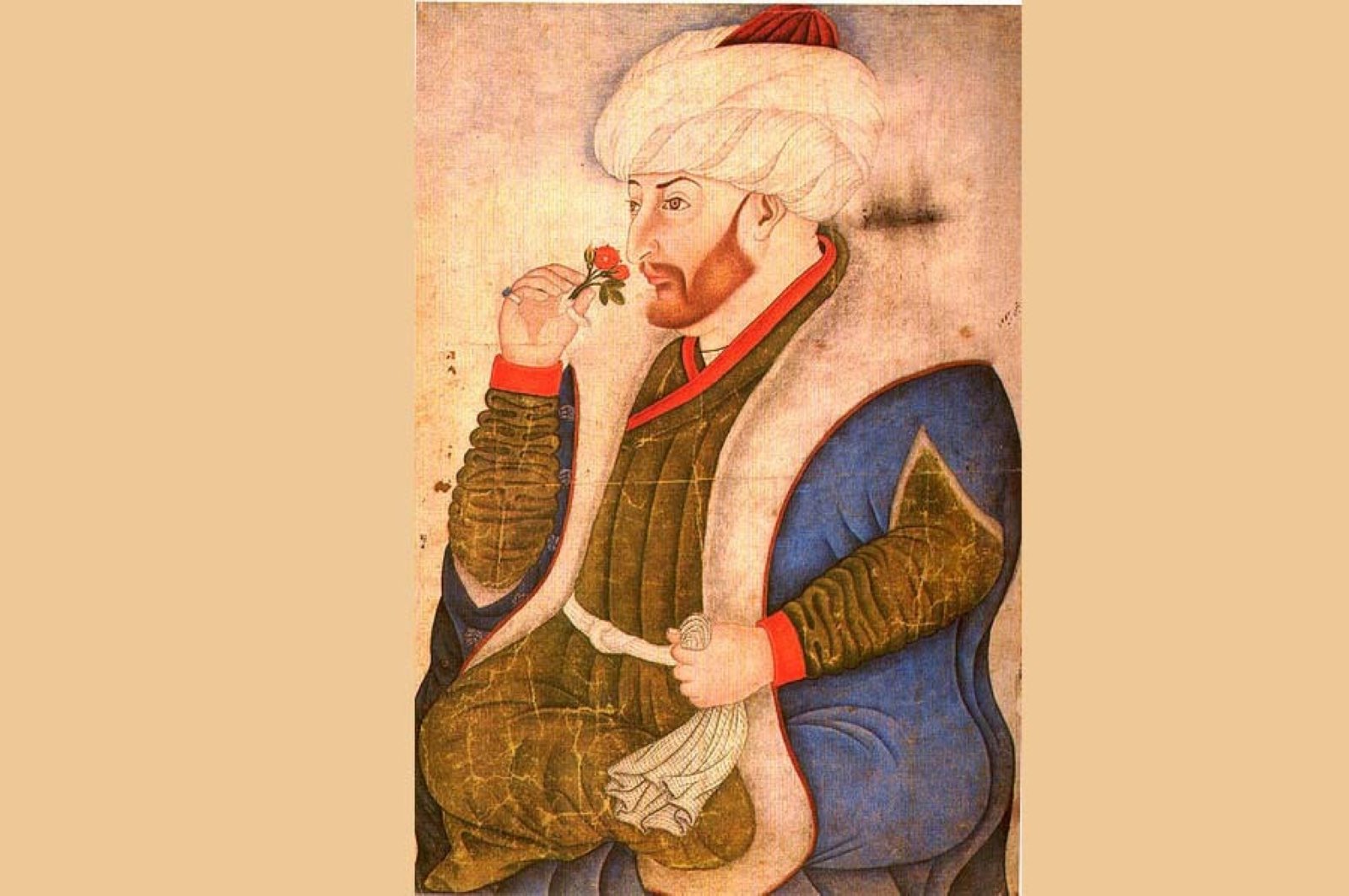 A portrait of Sultan Mehmed the Conqueror by artist Sinan Bey.
by ALİ TÜFEKÇİ Jun 09, 2020 12:21 pm
Edited By Irem Yaşar

As a versatile, intelligent Ottoman sultan, Mehmed the Conqueror became a role model for the succeeding sultans, after winning many wars and utilizing the possibilities he gained from books and science

In addition to his military and political achievements, Sultan Mehmed II also stands out as an intellectual genius. In addition to the social branches such as religion, law, politics, history, art and philosophy, he also had a grasp of several scientific disciplines such as mathematics, geometry and metallurgy. After the Conquest of Istanbul, he established the structure of a large state with the body of knowledge he acquired in social sciences on the one hand, while making inventions that would change the course of world war history on the other.

There are two main reasons for all these achievements: His good education and love for books. Before the Conquest of Istanbul, he had established a library in Manisa during his princely period. Then he moved this library to Edirne and made preparations for the conquest with the infrastructure he obtained from these works.

Books of all languages

Sultan Mehmed made great contributions to grammar. He was an avid reader and spoke many languages.

He was well-versed in the literature of his mother tongue Turkish and wrote many poems under the pseudonym “Avni.” He could speak different dialects of Turkish, such as Uyghur and Chagatai. He was also quite fluent in Arabic and Persian. Among the languages that he spoke are Greek, Serbian, Latin, Italian, and Hebrew.

One of the first structures built after the conquest was a library in the Beyazıd Old Palace. Known as the first library established in Istanbul, it was later moved to the New Palace. He also made great efforts to bring the most important sources of Islamic science history to the Palace Library.

Since he was a scholar and an artist himself, the importance he attached to science and art is very clear. He wanted to make Istanbul a beautiful city in every respect. He made sure the buildings built during his period were decorated with the most beautiful tiles and various carvings. He founded an art institute called “Nakkaşhane” in Topkapı Palace and brought here the most important artisans of Anatolia and Edirne.

The Nakkaşhane housed famous calligraphers, bookbinders, miniaturists and students from all over the country. This team worked on decorating new palaces, buildings, mosques and masjids and also duplicated many rare manuscripts for the sultan's personal library.

Sultan was always on good terms with scientists he met and approached them with the humble attitude of a student. It is mentioned in all sources that he always had an appetite for learning. He took the foundations of the empire with his high-grade university named “Sahn-ı Seman” or “Semâniyye,” a 15th-century Ottoman Madrasah complex in Istanbul which was founded by Sultan Mehmed with scholars as part of the Fatih Mosque.

In the palace, he followed the debates and conversations of scientists with interest. It is known that once the debates of Hocazade Muslihuddin and Alaaddin Ali Tusi went on for seven days. The subject of the debate was related to Abu Hamid al-Ghazali’s book “Tehafüt'ül- Felasife” (The Incoherence of the Philosophers). Al-Ghazali was a Persian scholar regarded as one of the most prominent and influential Muslim theologians, jurists and mystics of Sunni Islam. Muslim scholar and intellectual Ibn Rushd, often referred to as Averroes, wrote a counterargument against Al-Ghazali, accusing him of dulling the mind and thought.

When the scholars who discussed these two books from various backgrounds reported their evaluations, Sultan Mehmed asked his two teachers to write books on this subject. Hocazade completed his book in four months while Ali Tusi delivered his in six months. As a result, they proved that Al-Ghazali was right. Upon this, the sultan rewarded them with 10,000 coins for these books.

He was quite interested in history. He is known to have read about the life of Alexander the Great in great detail. Some commentators have opined that he aspired to be like Alexander the Great; however, such conjectures are baseless.

As a matter of fact, he made Ferdawsi-i Rumi, one of the poets of that period, write "Süleymanname,” an illustration of Sultan Suleiman I's life and his achievements. The reason for this is a dialogue between the sultan and Mahmud Pasha. "Why are there so many volumes on Alexander the Great but none on Suleiman?" the sultan asked Mahmud Pasha. “The world has not seen a great sultan like Suleiman.” They compared these two personalities for a long time. The preface cites this as the reason why this book was written.

There are many other books ordered by Sultan Mehmed as a result of debates and book chats.

Orientalists drew a legendary figure on the issue of books read by Sultan Mehmed II. The interpretations built on the work of orientalists such as Paul Emil Jacobs, who was a German painter renowned for Orientalist themes, portraits, over time consist of assumptions that are far from the historical methodology.

The palace library is the most important source from which we can learn about the kind of books that he was interested in. He kept many books on all religious sciences such as Islamic law, hadith, kalam and tafsir in the history of Islam there. He is said to have taken over a huge library as the Byzantine spoils of war, but its nature is unknown.

He is also known to have been closely related to the cultural heritage of Greek and Rome. He made attempts to bring some of the works written in these languages into his library and have them translated. He also made efforts to collect Latin works. His curiosity and interest in books dates back to his childhood.

It is not possible to understand Sultan Mehmed’s intellectual body of knowledge without taking a closer look at the scientists that trained him and the scholars he engaged in conversations.

It is said in the narrations about Sultan Mehmed's childhood that he was stubborn and did not listen to his teachers. There is a name that led him to books: Shams al-Din Ahmad bin Ismail (Molla Gürani).

Sultan Murad II was worried that his son was not receiving a good education. Therefore, he was in search of a good teacher. One day, when Molla Yegan, one of the scientists of the period, returned from the pilgrimage, he appeared before the sultan. "What gift did you bring us from where you traveled?” Sultan Murad II then asked. "I brought a scholar raised in tafsir and hadith,” Molla Yegan replied. This person was none other than Molla Gürani.

Sultan Murad was very pleased. He appointed Molla Gürani as a professor. When Sultan Murad heard that he was a very good tutor, he asked him to raise his son Mehmed. He gave him all kinds of power. According to the narration of historian Hoca Sadeddin Efendi, an Ottoman scholar, official and historian, Molla Gürani would apply a method he had never seen before.

When he realized Mehmed did not listen to the lesson, he said he could beat him as a teacher if necessary. However, Mehmed was not afraid of these words and maintained the same attitude. He took out a stick from the bottom of his robe and made him study the Arabic verse, "darabtuhu te’diben / I hit him to train." After this case, Mehmed changed his attitude of not reading and not listening to his teachers.

With these different and disciplined training methods of Molla Gürani, he made great progress in a short time. He trained him very well, both scientifically and spiritually. Although Sultan Mehmed wanted to make him a vizier after the Conquest of Istanbul between 1446 and 1451, he refused, saying that "so many gentlemen have worked to be viziers, they should not break their hopes." The rumor has it that he would only call him Mehmed after he ascended to the throne.

Sultan Mehmed II owes this library, which he carried from Manisa to Edirne, and his acquisition from the preparations of the conquest to his teacher. Among his other tutors are Molla Hüsrev, Molla Zeyrek, Molla Ilyas, Hoca Yusuf Sinan Pasha, Ahmed Pasha, Hocazade Muslihuddin and Hoca Akshamsaddin. He also had Italian teachers, including Ciriaco Anconitano and historian Giovanni Maria Angioello.