Journey in search of truth: Metaphorical story of Simurgh, sovereign of birds 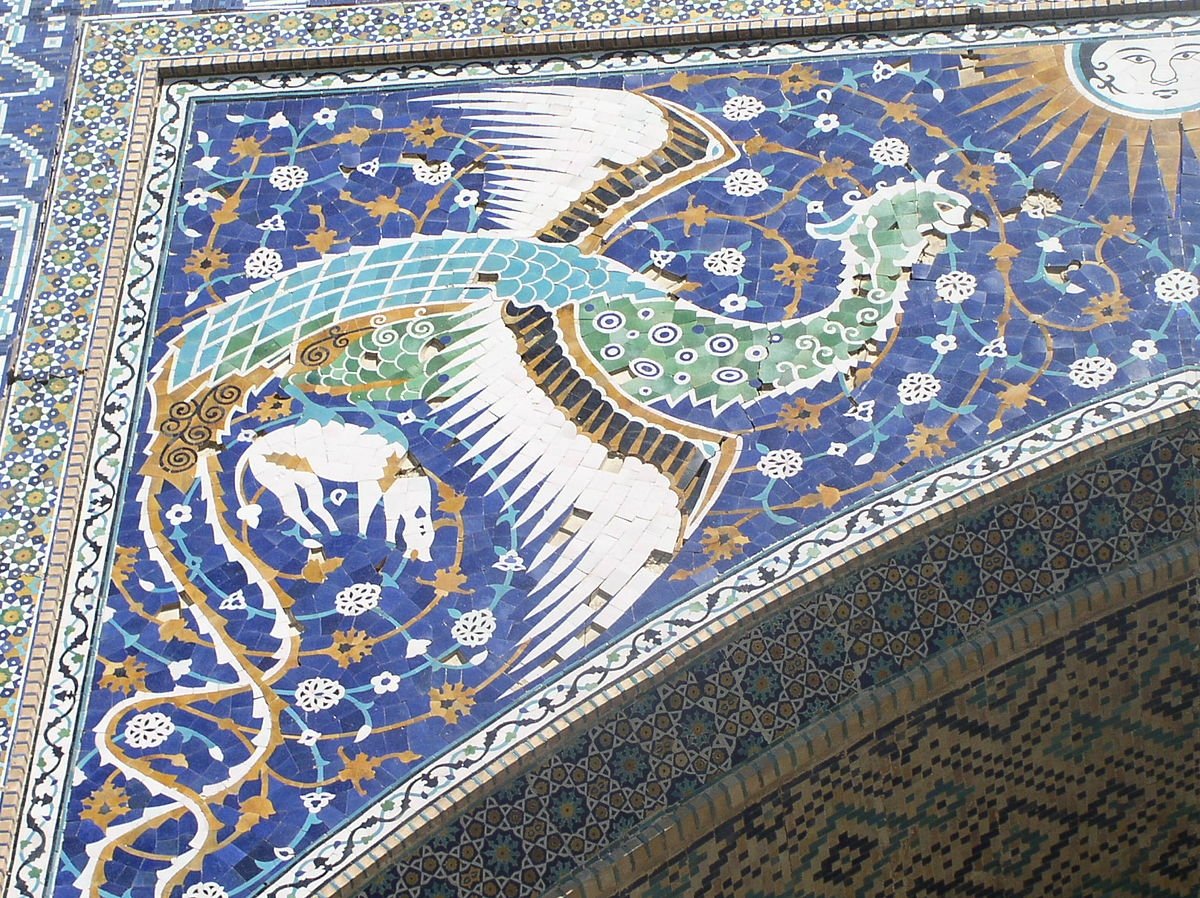 Recently, an example of the classical period of Ottoman ornamentation called “saz yolu,” which features the figure of the mythological bird Simurgh, was uncovered on the vaulted ceiling covering the courtyard between the Sacred Relics Section and the Revan Mansion at the Topkapı Palace in Istanbul. This colorful ornamentation, which is thought to have been painted by Şah Kulu, the chief miniaturist of the Ottoman palace in the 16th century, is notable for its depiction of the Simurgh.

The Simurgh, which is considered to have first appeared in Iranian mythology, has flapped its wings across many mythologies. We see the depictions of the Simurgh under different names in Mesopotamian, Egyptian, Chinese, Indian, Greek-Roman, Turkish and Slavic mythologies as well.

The figure is still used in many areas of culture and art, from architecture to fashion. It is a symbol of remedy, and one of the most prestigious awards given by Iran's Fajr International Film Festival is named after the bird. The character Jean Grey in the fantasy comics and film series “X-Men” is also inspired by the Simurgh. In the last two films in the series, “Apocalypse” and “Dark Phoenix,” Jean Grey ends up as a Simurgh at the end of his character transformation process.

Apart from these familiar themes, the Simurgh was commonly used as a metaphor throughout Eastern literature and works of art.

The reputation of the Simurgh in Ottoman culture and art was far beyond architectural decoration. The word Simurgh is a combination of the Persian words “si," which means 30, and “murg," which means bird. It is thought to be a creature that is the size of 30 birds, bearing characteristics from various species of birds. Some say its name comes from a story written by a Persian poet.

While this bird, which is believed to live in the legendary land of unknowns called Mount Qaf, is called “anka” in Arabic, meaning "long-necked," it is translated into Latin as “phoenix.” In Ottoman literature, it is called “zümrüdüanka." “Zümrüt” means emerald, prefixed to the word “anka” because of the bird’s green wings.

The bird metaphor, referred to as “tayr” in Arabia and “murg” in Persian, has a large symbolic universe containing Sufi meanings in Eastern Islamic literature and particularly in Ottoman literature. Sometimes it symbolizes the heart and life of the lover, sometimes the whole existence of the lover. It also represents reason and consciousness.

A remarkable number of poets have mentioned birds in their poetry. Among these mentions are their singing, flying low or high, falling into traps, losing their partners, getting injured, breaking their wings or being hunted, residing in vineyards, gardens and green areas, being locked in a cage, being scared off with stones, and being timid, weak, hungry and without shelter in the cold.

In Sufi terminology, the soul in the body is associated with a caged bird. Death is thought to set a soul free, allowing it to explore infinite realms. The numinous path called “seyr-i süluk,” which an individual takes in order to advance spiritually, and the levels he passes in this path are symbolized by the story of the Simurgh in Sufism. “Mantıku’t-Tayr” (“The Conference of the Birds”), a Persian poem by famous Sufi poet Farid ud-Din Attar – commonly known as Attar of Nishapur – tells us this legendary story.

The story recounts the longing of birds for a leader, saying that there is no state without a ruler, and no order can be established without one. The hoopoe bird, the wisest of them all, suggests that they should find the legendary Simurgh. This bird is referred to as the postman of Solomon in the Surah An-Naml, the 27th chapter of the Quran with 93 verses. The hoopoe leads the birds, each of whom represents a human fault that prevents humankind from attaining enlightenment. The hoopoe tells the birds that they have to cross seven valleys of “quest,” “love,” “knowledge,” “detachment,” “unity,” “wonderment,” and “poverty and annihilation” in order to reach the abode of the Simurgh.

The birds decide to find the Simurgh, but when they realize that there is a long and challenging way ahead, many of them, including the nightingale, parrot, peacock, goose, partridge, huma, falcon, heron, owl and others, make excuses to give up.

The nightingale says it has fallen in love with the rose, and this love will be enough for it. The parrot is afraid to die. The peacock says it has been banished from heaven for helping the devil and all it wants is to go to heaven again. The goose says it lives on the water and owes its cleanliness and beauty to water. The partridge says, “there is nothing more valuable than jewelry.” The huma considers itself superior to the Simurgh. The hoopoe convinces all of them, and they set out.

Thousands of birds, exhausted and tired on the journey, ask the hoopoe for the elimination of their doubts. The hoopoe again answers their questions and objections.

One by one, the birds drop out, and only 30 birds are able to cross these valleys and reach the supreme lodge, the abode of the Simurgh. When sick and tired birds ask about the Simurgh, another bird waiting there puts a piece of paper in front of them and tells them to read it.

The birds are astonished to see that their entire struggle is written on paper. Meanwhile, the Simurgh appears. But all they see is their own reflection.

They are amazed to see themselves in the Simurgh and the Simurgh in themselves. “You, the 30 birds, have come here and appeared to be the 30 birds; if you were more or less in number, you would appear as many as that; here is a mirror,” the Simurgh says.

Thirty birds who manage to achieve their goal realize that they are the Simurgh they are looking for. There are no paths, no travelers and no guides now. Just like the disappearance of our shadow as the sun sets, they all disappear within the body of the Simurgh and become one with it.

The poem, which has deep and symbolic meanings, was translated into Ottoman Turkish by Ottoman poet Gülşehri. According to German Orientalist Hellmut Ritter, Muslim scholar Abu Hamid al-Ghazali had previously dealt with the same story in his “Risalat al-Tayr” (“Epistle of the Birds”), which he wrote in both Arabic and Persian. The story was very popular in the Eastern world, especially in classical Turkish poetry, addressed and referred to in various ways in many other literary works.

"The one who has not tasted will not know" – this is what is said about spiritual states in Sufism. So to speak, no matter how much you tell a person about a meal that he has never tasted, it is nothing compared to actually tasting the food. Beyond a certain level, the tongue cannot describe the spiritual state a person is experiencing. No matter how well he explains it, others will not understand.

The reason why a symbolic language is preferred in Eastern literature is to avoid misunderstandings in texts that handle Sufi themes. A curtain of metaphor relays the intended messages while creating an interesting story.

The hoopoe, the guiding bird in “The Conference of the Birds,” symbolizes a Sufi mentor and the valleys symbolize the spiritual levels that the Sufi is supposed to pass through.

Each of the other birds represents various human characteristics. The nightingale represents someone who is possessed by worldly things and forgets his or her creator; the parrot clings to worldly goods in fear of death; the peacock is obsessed with the piece and misses the whole, and the partridge cannot reach its main goal due to its materialistic ambitions.

The story conveys the message that the beginning point and the final point of the journey are the same. Initially, the birds know nothing except the legends about the Simurgh and the roads leading to it, just as Sufis know nothing about Sufism.

What birds see at the point where they reach the end of a long and challenging journey is none other than themselves. This represents the Sufi's full knowledge of himself spiritually and physically.

At the end of the road, he will again know nothing about the Simurgh. But this time his ignorance has become absolute, which explains the situation expressed in Sufism with the concept of “yaqeen” ("certainty"). All knowledge about the creator has now become absolute in his heart.