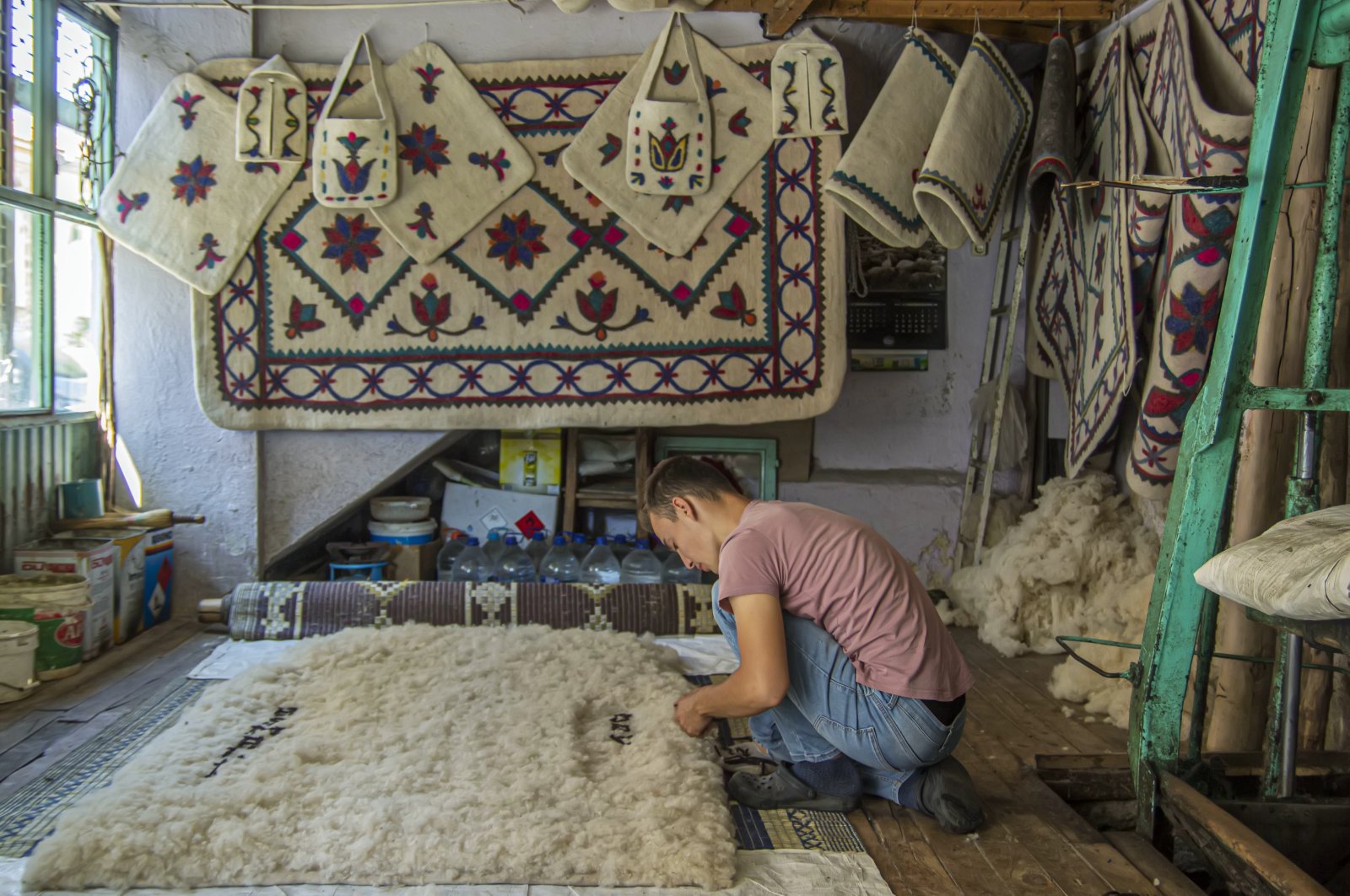 Felt, the oldest-known type of fabric in human history, has always been produced with the same basic principles and raw material for ages. Here is a short history of this ancient craft in Turkish culture

Felt is a fabric crafted by rolling and pressing wool fibers while applying heat or moisture. This textile, used in the production of a diverse range of items, from blankets to clothes, is one of the oldest products and maybe the oldest fabric known to man.

It is not surprising that felt has had a significant and long past in the culture of Turks, who are from one of the oldest civilizations in the world. The first examples of felt making, dating back to the fourth or fifth century B.C., were discovered at Pazyryk burial sites in Central Asia, showing that the ancient Turkic societies also knew how to make the textile material. Felt socks, boots, combs and instruments found in these burials give an idea about the Turkic lifestyle of that era.

There is proof that the Uyghurs in Central Asia and the Hittites in Anatolia utilized felt in their daily life. Nomadic Turkic communities also continued to use felt to produce their belongings and incorporated the wool from the animals they raised into the design of their tents and decorative elements. Felt socks, boots, bags, carpets and covers were a cultural element unique to nomadic Turks. However, felt was not only a commodity but also a symbol for law and the state in Göktürks. They, for example, used felt covers in the accession ceremonies of the khagans.

In the later period, Seljuks, who adopted both sedentary and nomadic lifestyles in Anatolia, used this natural textile to make their tents, saddle covers, boots, börk (a type of traditional Turkish cap), clothing and kepeneks (traditional shepherd's outer garment). After the Seljuks, felt also took its place in the culture of the Ottomans. During that period, felt was particularly used in headwear and usually indicated the class or rank of the person wearing it.

Thus, felt making has become an important cultural element of Anatolian lands over time. In the modern period, some Turkish masters still try to keep this ancient craft alive and transfer it to the next generation; although it has naturally lost some popularity with the introduction of textile machines.

Human-made fabrics are generally woven; however, felt differs in this sense. Instead of weaving, the production of the fabric is based on pressing. Felt, like all handicrafts, is a product that takes a long time to produce and requires a lot of effort. As the first step of felt production, sheep are shorn during the summer months, which relieves their heat stress. Then the wool taken from the animals is separated according to coarseness because different types of wool are used for different products. Next, the wool is washed and dried, and the fibers are combed to be arranged in flat bundles.

Looking at the history of felt making, it is seen that early people used the method of beating the wool. However, two techniques called “wet felting” and “needle felting” have now made producing felt much easier.

Traditional wet felt making is almost the same as the beating method, but there is no need for a large workshop or physical strength. In this technique, the wool tufts are spread on a surface and moistened with warm water and olive oil soap. Then, the layer of tufts is wrapped, and heat is applied to it. After being rinsed, it is left to dry.

The needle felt making technique, on the other hand, is a new method that allows felt to be made at home. There is no need for soap and water for this method. In this technique, all the material consists of felt needles and colored fibers that are easily available on the market. The wool is pushed with felt needles and fused with other fibers.

What is amazing about felt is its use as a natural insulator. For example, if you cover an ice cube with felt, it will help it stay frozen for a surprising amount of time. Or, vice versa, it helps to keep a hot beverage warm, like a thermos. This was why ancient people utilized this useful textile to produce their tents and clothes.

Moreover, felt is innovative, as much as it is beneficial, in terms of its use. The use of felt has increased over time. This fabric, which was used in the production of essential items in the past is now often used to make accessories, souvenirs and decorative products. It is even one of the most popular materials that contemporary artists prefer for their creative artwork.