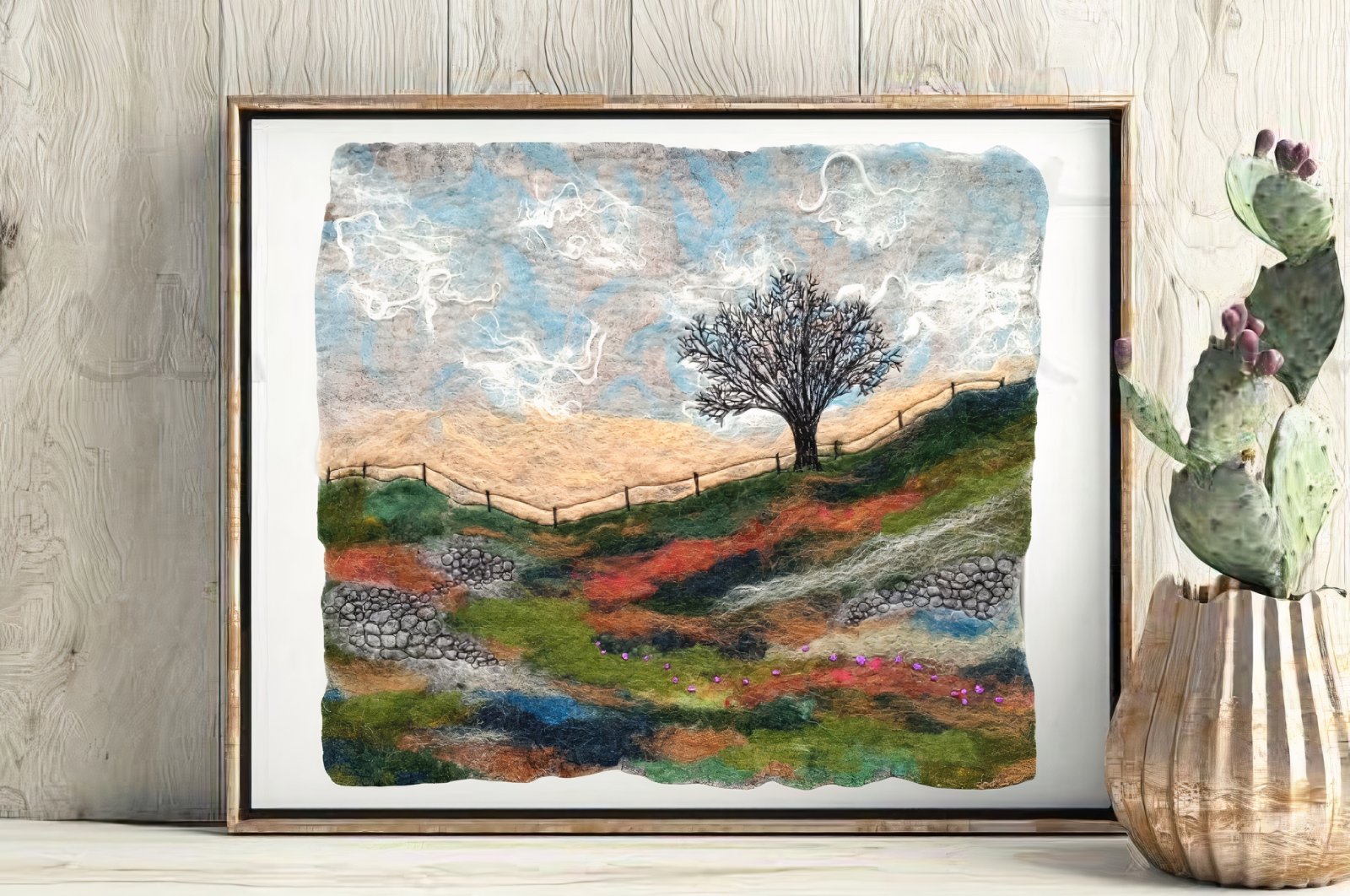 Okan is not only keeping felt making alive with her mesmerizing products but also promoting this traditional art abroad, selling her artwork internationally

Felting is one of the oldest crafts in history, and it also has a long past in Turkish culture. The first examples of this ancient craft, dating back to the fourth or fifth century B.C., were discovered at Pazyryk burials in Central Asia, showing that the ancient Turkic societies also knew how to make the textile material.

Nomadic Turkic communities incorporated the wool from the animals they raised in the design of their tents, belongings and decorative elements, and they wove handmade carpets and felt. For example, the Göktürks used felt covers in the accession ceremonies of the khagans. It was not only good for practical use but also symbolized law and state during the Göktürk period.

The use of felt in tents, saddle covers, boots, börk (a type of traditional Turkish cap), clothing and kepeneks (traditional shepherd's outer garment) continued in the period of Seljuks, who sustained both sedentary and nomadic lifestyles in Anatolia. In the Ottoman period, felt was particularly used in headwear, and usually indicated the class or rank of the person wearing it.

The use of felt has increased over time. It is now often used to make accessories, clothing, souvenirs and decoration products. Although traditional, handmade arts and crafts tend to lose popularity due to technological developments, some masters like Arif Cön in western Izmir province and Mehmet Girgiç in central Konya province sustain the art of felt making and encourage young generations to keep it alive as well. One of the more contemporary artists that contribute to the survival of felt art is Ergül Okan. The Turkish artist produces a variety of felt goods from paintings to accessories, decorative products and clothing and sells them not only in Turkey but all over the world.

Speaking to Daily Sabah, Okan described her journey in felt-making, explaining how she became interested in this art form. Noting that she has always been into the arts, Okan said that she had a chance to explore her interest after returning from the U.S., where she went to study in the 90s.

When she was in the U.S., Okan worked as a middle-level manager in an international tourism company and lived in various U.S. cities, Mexico and the Dominican Republic. Starting a family after coming back to Turkey later on, she decided to step away from her professional career and engage in arts. Mentioning that she attended various courses, including painting and ceramics, Okan continued: “Then, some accessories, three-dimensional objects and textile products made in European countries, the materials of which I did not know, started to attract my attention on the internet. I finally learned that they were felt products. This is how I started to make tiny felt products. I also watched all the videos I could find and read a lot to learn the details of felt making.”

After this very first meeting with felt-making six years ago, Okan developed and improved her skills by learning and trying new techniques. Recalling the great philosopher Mevlana Jalaladdin Rumi’s famous quote, “What you seek is seeking you,” she said: “I feel exactly the same for felt. I've come to Turkey after traveling the world, and it seems like the art of felt making has always been there waiting for me to discover it."

Okan produces her artworks using two methods: wet felting and needle felting. If she uses traditional wet felting, she spreads the wool tufts on a large area to determine its layout and makes patterns on it. She then wets it with warm water and olive oil soap, wraps it and applies heat to it. Then rinsing her artwork, the artists leave it to dry. However, the process of needle felting is a little bit different. The artist uses special felt needles to push the wool and fuse it with other fibers. Depending on the size of the work, the needling process can take a long time.

The artist initially created western-inspired products but the traditionality of felt, the ancient Anatolian land, the rich and unique Turkish culture encouraged her to use more traditional motifs and to make portraits of women in particular. When you examine the artist’s works, you can see a Turkish rug and carpet motif, a view of houses in the wild reminding of an Anatolian village or a portrait of an Anatolian woman. Besides creating both fairytale-like and contemporary landscapes, Okan tries to increase people's awareness of the natural beauties of the world that are disappearing due to global warming.

Noting that her products generally feature bright colors, Okan said that this is a reflection of her inner world. To decide what hues she will use in her artworks, the artist looks at visuals on different subjects and the various color combinations. Nature and its colors are the biggest inspiration for her. Okan, moreover, likes to blend different media techniques with felt. She combines wool threads, alpaca wool, beads and natural fabrics (such as silk, cotton fabrics), etc. in many mesmerizing ways.

According to Okan, felt is not just an object, produced by skilled hands of master with wool, hot water and soap. Felt making is a job that requires a lot of effort and patience. Noting that felt has always been a way of enlightenment for her, she said that felt making and Sufism have a metaphorical connection.

In Sufism, felt represents "al-Insan al-Kamil," which literally means "the complete or perfect person," while wool represents man. That's why dervishes are also called "sufi," which is derived from "suf" meaning "wool" in Arabic. “Sufi” also means "the one wearing woolen clothes." The arduous journey of wool to become felt is likened to the grueling journey of man to become an al-Insan al-Kamil or perfect human, by releasing himself/herself from the chains of the world’s illusions and devoting himself/herself to God.

Opening up to world

Okan initially gifted her artwork to her friends but when people started asking for customized objects, she started designing special products and selling them. At first, she sold her artwork through her Instagram page "KECHECIM." Then, she tried to sell her products through Esty upon a suggestion of a friend. Reaching more people through the website, the artist receives orders from all over the world, including the U.S., Canada and the U.K. As people were confined to their homes during the COVID-19 period, the demand for her products increased with more people wanting to make their living space comfortable and cozy.

According to her, people living abroad love felt products and show great interest in them for many reasons – including its health benefits. “For example, an American psychologist ordered a huge felt painting for the wall of his office where he accepted patients. Because of its sound-absorbing feature, felt serves as a therapy for people.”

“Felt is an ecological, natural product and its benefits are endless. It is a very good insulating product. The products made from it keep warm in the winter and cool in the summer. Scorpions and snakes cannot walk on felt. In terms of health, it has many other benefits. Felt is good for back and waist pain, does not pass radiation rays and does not contain bacteria,” she continued.

Sustaining the art of felt making and transferring it to future generations is among Okan's missions. For this purpose, she taught felt-making to her 9-year-old son and 11-year-old daughter, as well. “The indifference of the new generation youth, the increase in new business areas with the development of technology and the youth’s desire to have a money-spinner are among the main reasons for the decrease in the interest in traditional arts, including felt making.”

The artist wants to begin workshops for people who want to learn the craft to keep the art of felt alive in the future. The artist currently provides online tutorials but improving this training and modernizing traditional methods with modern designs are the next steps that she wants to take in her artistic career in the future. To take a look at or purchase the fascinating works of the artist, you can visit her accounts on Instagram or Etsy!