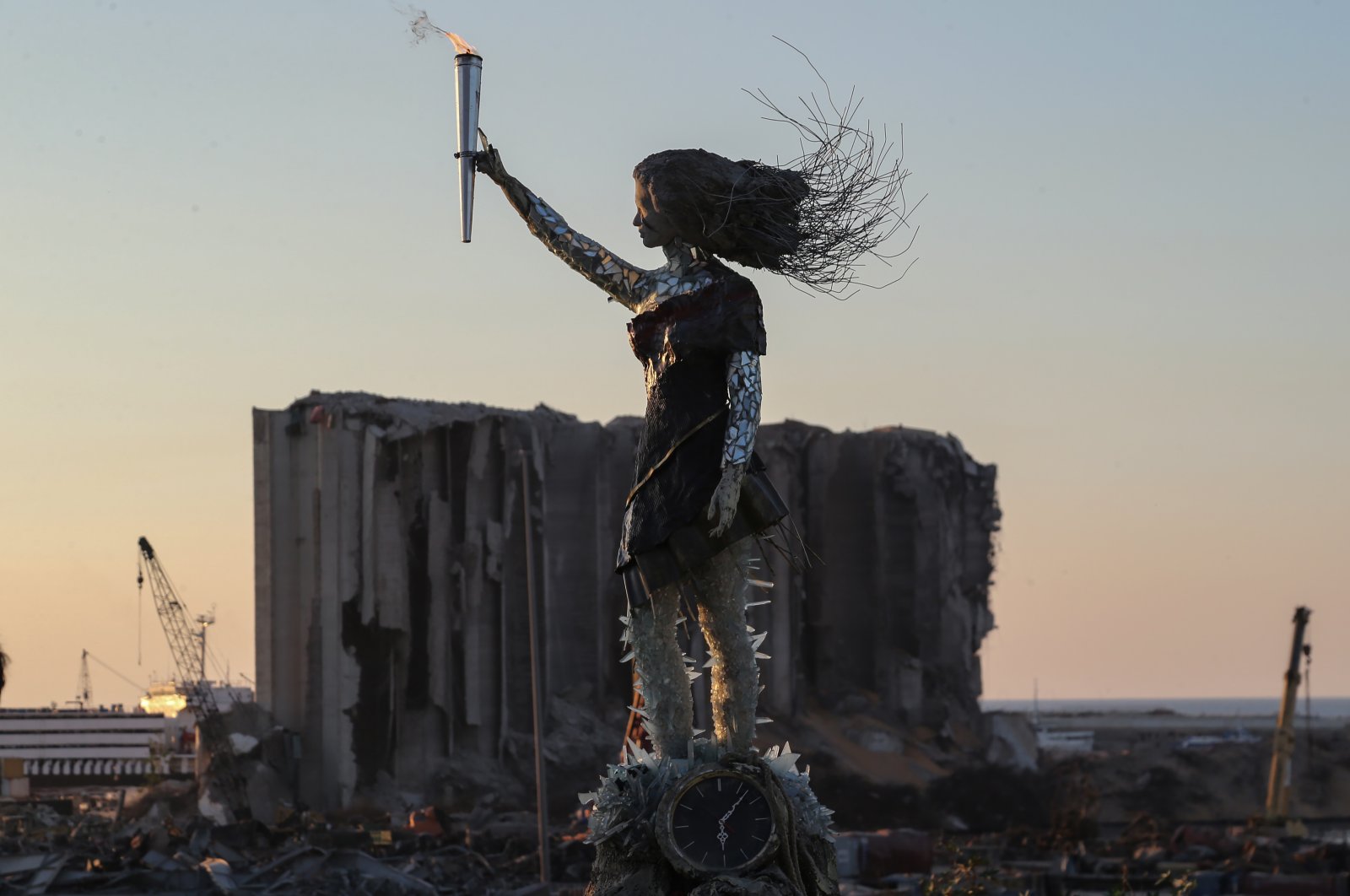 A statue of a woman carrying the torch of revolution made of glass and the rubble that resulted from the explosion at the Beirut port is seen in Beirut, Lebanon, Oct. 17, 2020. (EPA Photo)
by REUTERS Nov 16, 2020 5:33 pm
RECOMMENDED

She stands nearly 3 meters (9.8 feet) tall with her arm raised, the wind whipping the hair away from her scarred face, and a broken clock at her feet with the hands showing 6:08, the time that a blast ripped through Beirut port on the evening of Aug. 4.

The unnamed statue by Lebanese artist Hayat Nazer is made of broken glass and twisted materials that belonged to people's homes before the explosion that killed 200 and injured 6,000 people and symbolizes the city's hopes of rising from the rubble.

"If you look at the statue, one half has a leg standing, the hand looks surrendered, there is a scar on the face with the flying hair and the clock on this side, as if the explosion is still happening," Nazer told Reuters Television.

"But the other hand and the other leg ... is leaning as if it is starting to walk and the hand is raised, it wants to continue, it wants to keep going and rise from the rubble. And this is the truth, this is our truth," the 33-year-old said.

The huge blast, which leveled a swathe of Beirut and made some 300,000 residents homeless, has compounded Lebanon's worst financial crisis since the 1975-1990 civil war.

She says those affected by the blast who saw the 2.6-meter statue, temporarily displayed in front of the damaged port, drew strength and hope to carry on.

Nazer had already started on a female sculpture before the blast but volunteered to help clean up destroyed houses and streets. At night, she would return to the sculpture, using the shards of glass and metal pieces she had collected.

"I felt like Beirut was a woman ... who despite what she suffered ... is very strong," she said.

Inspired by Lebanese singer Majida El Roumi's "Beirut, Lady of the World" and its lyrics "Rise from under the rubble," Nazer says the statue took her a little more than two months to complete.

She did not name the artwork because she wanted the public to do so.

This is not the first time Nazer has used debris in her art.

Her previous works include a model of the mythological Phoenix made out of pieces of protesters' burnt tents, and a heart-shaped sculpture from stones and empty teargas canisters collected from clashes between protesters and security forces.