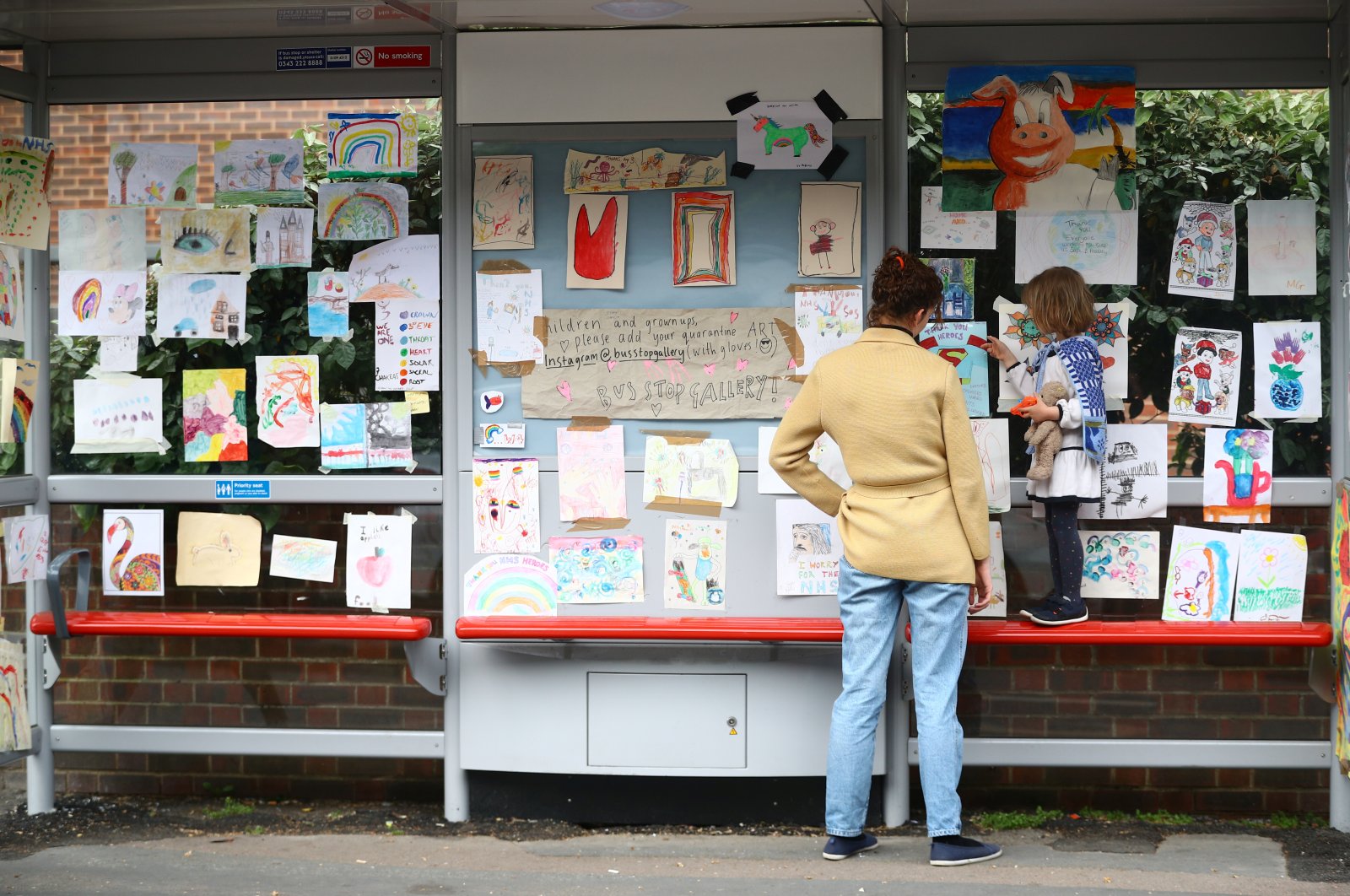 Sarah Lamarr and her 4-year-old daughter, Rosie, who started a "bus stop gallery" look at artwork at the bus stop following the outbreak of the coronavirus, London, Britain, April 27, 2020. (Reuters Photo)
by REUTERS Apr 28, 2020 11:48 am
RECOMMENDED

A London bus stop has been transformed into a children's art gallery by a local resident who wanted to brighten the drudgery of lockdown life, creating a colorful community hub amid the anxiety and isolation of the COVID-19 pandemic.

A handwritten sign with an Instagram handle encourages kids and adults alike to contribute submissions, with the wall of the bus stop covered in drawings depicting things such as a unicorn, flowers and rainbows, which have come to symbolize positivity and solidarity with Britain's health workers during the outbreak.

Sarah Lamarr, a part-time teacher and mother of 4-year-old Rosie, started the gallery when she woke up the day after Britain's coronavirus lockdown began and realized she would be stuck inside indefinitely with only a bland bus stop to look at.

"I just wanted to do something to brighten it up so I didn’t have to look at a gray bus stop for the next however-long," she told Reuters.

Lamarr said she felt like the protagonist of Alfred Hitchcock's 1954 thriller Rear Window, which stars James Stewart as an injured photographer who watches his neighbors after he is confined to his flat with a broken leg.

"If you have a bus stop near you, I would really encourage anyone to do the same because it's just a really lovely thing to have in your community," she said.

"If you are stuck in a first floor, second floor flat with no garden with kids, it’s just a great thing to watch out the window."

One picture of flowers was accompanied with a message saying "Let's focus on the positive" while another drawing of a Superman costume said, "Thank You Heroes," and listed roles which frontline workers are continuing to carry out.

Several locals who saw the artworks on the bus stop in west London, near Turnham Green, said it had improved their mood.

"People definitely need to see these messages and it just adds color and a bit of fun and a bit of brightness to what otherwise could be a tough day for somebody," said Vicky Leviten, a home childcare owner and local resident.

"I think it just lifts the spirits, it’s fabulous."