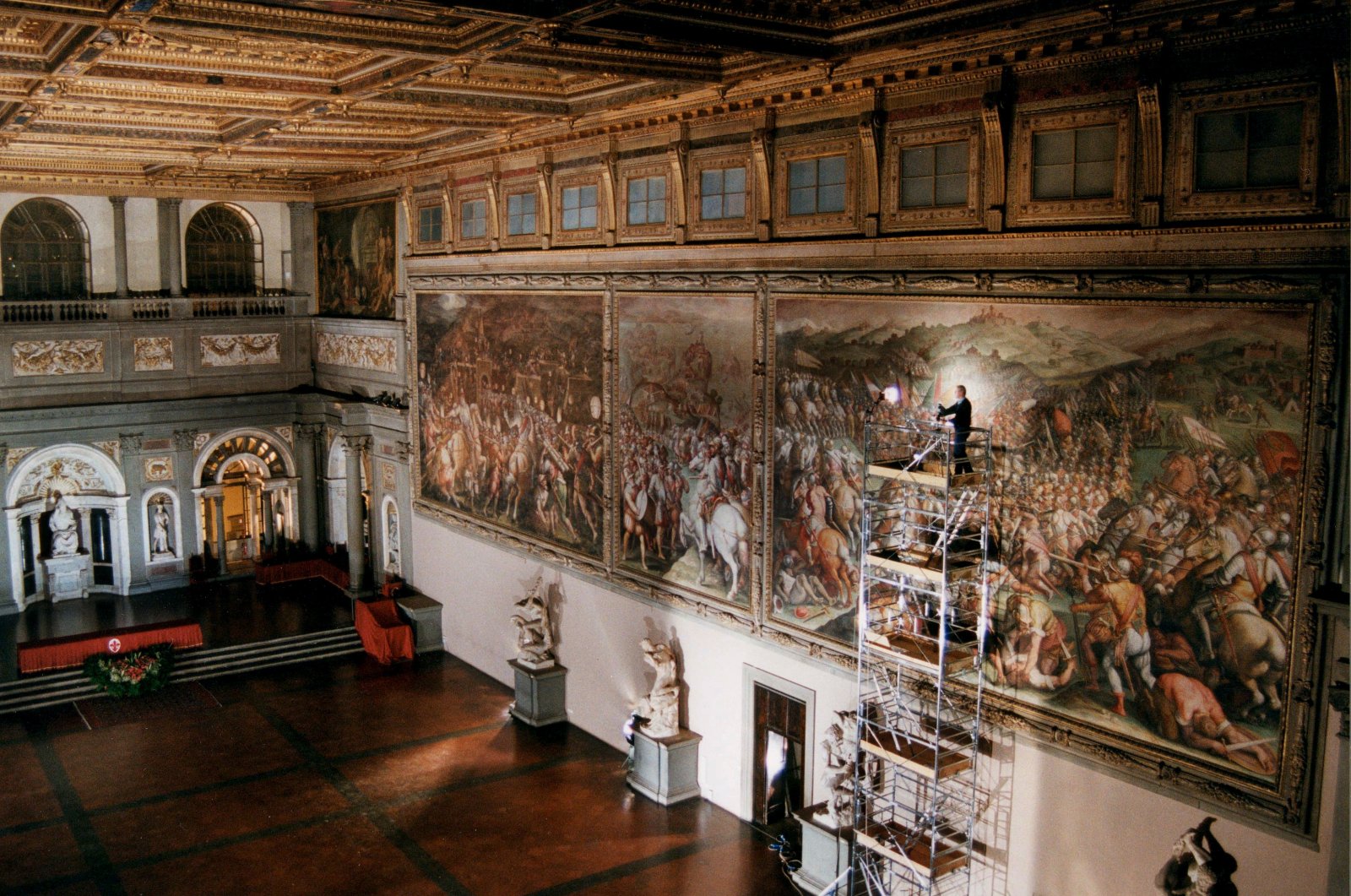 In front of Giorgio Vasari's fresco "The Battle of Marciano," which hangs in the Palazzo Vecchio, Italian art expert Maurizio Seracini used radar and X-ray to detect "The Battle of Anghiari," hidden behind this fresco, on Nov. 19, 2009. (REUTERS PHOTO)
by German Press Agency - DPA Oct 08, 2020 10:38 am
RECOMMENDED

A centuries-old art history hunt for a Leonardo da Vinci painting was declared over on Wednesday as experts said the Renaissance genius never painted the legendary "Battle of Anghiari."

The mural, celebrating the 15th-century victory of the Florentine Republic against the Milanese, was long suspected to have been hidden behind a wall in Florence's town hall, the Palazzo Vecchio.

"Leonardo never painted that battle on that wall, that is a conclusion," Francesca Fiorani, an art historian from the University of Virginia, said in a conference at Florence's Uffizi Galleries.

Fiorani said Leonardo only got around to doing preparatory drawings for the large-scale mural, which was commissioned from him in the early 16th century.

There are records of materials supplied to the painter in connection to the job, and "those materials were not materials to paint the battle but to prep the wall (for painting)," she said.

"The prepping of the wall did not go well, and it all stopped there."

Fiorani was presenting a new academic publication on the "Battle of Anghiari" controversy to which she contributed, along with several other international experts.

"We have lost a battle (of Anghiari), but we have gained a consensus on scientific research which I would say is particularly welcome," she quipped.

Fiorani and her peers believe they have conclusively disproved the theories of Italian researcher Maurizio Seracini, who in 2012 claimed a breakthrough in the search for the lost da Vinci.

Seracini drilled small holes through another fresco in the Palazzo Vecchio, and said he found a wall behind it with traces of black pigment similar to that found on da Vinci's "Mona Lisa."

Cecilia Frosinini, another contributor to the new study who works at the Opificio delle Pietre Dure, a restoration center in Florence, said this was implausible.

The samples extracted by Seracini are lost, but follow-up research suggests they must have been "extremely common materials that can be found in any ancient wall," without any pigment, she said.

Seracini's theory on the "Battle of Anghiari" was that it was walled up in 1563 when Florence was ruled by the Medici family, allies of the defeated Milanese.

The Medici commissioned Giorgio Vasari, a painter and architect, to renovate the Palazzo Vecchio's main hall and paint new murals celebrating their exploits.

Seracini and others suggested that Vasari chose not to erase the work of da Vinci, an artist he admired, leaving it intact behind a new wall on which he painted his own battle scenes.

One of Vasari's frescoes, the "Battle of Marciano," includes a banner with the inscription "Cerca trova" (Seek and you shall find). This was seen as a possible clue to the lost da Vinci.

The inscription, and the speculation behind it, gained notoriety after featuring prominently in bestselling author Dan Brown's mystery novel "Inferno."

Nevertheless, it has "nothing to do with Leonardo," Marcello Simonetta, a Renaissance historian at the Paris Institute for Advanced Study, said at the Florence conference.

It should instead be seen as "heavy mockery" of Florentine rivals who were defeated by the Medici in the battle depicted by Vasari, Simonetta said.