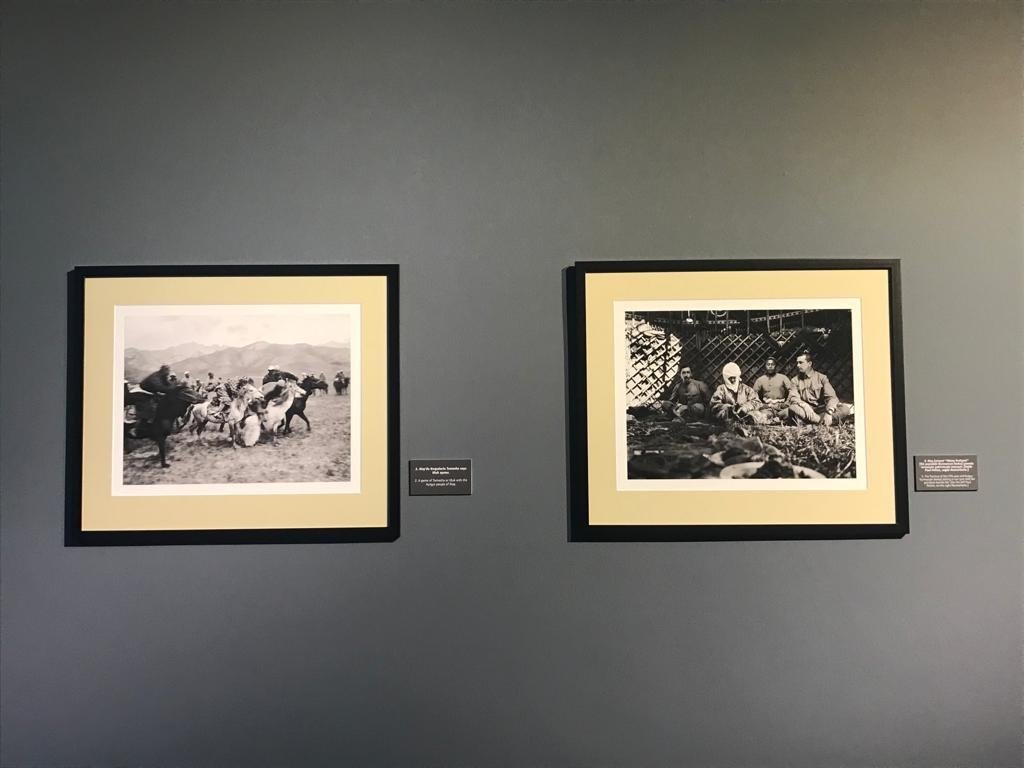 The Embassy of Finland in Ankara inaugurated Tuesday an exhibition of rare photos clicked by the country's former president and military leader Carl Gustaf Emil Mannerheim during his horseback journey along the Silk Road between 1906 and 1908.

The exhibition of 48 photographs from Central Asia to China will be open to visitors until Nov. 14 at CerModern arts center in the capital Ankara.

The photos taken in the early 1900s draw the visitor’s attention due to their extraordinary vividness, detail and stories.

Mannerheim, who was a lieutenant colonel at the time, used a heavy 9x12 centimeter field camera, difficult to use and carry on horseback, and took 1,200 negatives in total. Some of the photos were taken for military purposes while others were for anthropologic records. As a result, we can see photos taken of the same person from the front as well as the side.

Life, as it was more than 100 years ago, is depicted in these photos, from everyday drudgery to festive occasions. Mannerheim met with haughty Mandarins, beggars, opium smokers, soldiers, tribe leaders, as well as nomads.

The photos come together with a photo diary that documented every shot, amounting to a colorful reportage of a bygone world.

In the spring of 1906, 39-year-old Mannerheim from the Grand Duchy of Finland, then an autonomous part of the Russian Empire, received a task from the army. Assigned to gather up-to-date political and military intelligence for the Russian army, he posed as an explorer throughout his undercover adventure.

Just a few years earlier, Russia had suffered a humiliating defeat to Japan in Manchuria and an intricate game was in progress throughout Central Asia, involving Russia, Japan, and Britain, as well as spies, agents and investigators from several countries.

During the two-year journey, Mannerheim traveled around 14,000 kilometers, mostly on a horse, under various circumstances as is being depicted in the photos he took. We see many photos of his caravan traveling through rivers, steep mountains, steppes and deserts while engaging with the local people.

Mannerheim took measurements, drew maps and documented his experiences throughout the journey. He had studied about the region, previous travels and discussed the scientific goals of the trip with the Finnish scientific community before departing on the expedition.

The curator of the exhibition, Peter Sandberg, elaborated on the stories behind each of the 48 photographs during the opening Tuesday, attended by several ambassadors and members of the media.

Finnish Ambassador to Turkey Ari Maki made an opening speech, briefing the guests on the exhibition and Mannerheim.

Attendants had the chance to try Vorschmack – one of Mannerheim's favorite dishes made of salty minced fish or meat, and Finnish drinks.

Mannerheim, who was of Swedish ancestry, was a great Finnish military leader and statesman who defended Finland against the Soviet forces during World War II (1939-1945) and later served as the country's president.

Standing out as a successful lieutenant in the Russian army, Mannerheim went to Finland following the Russian Revolution in October 1917. By December, Finland had already declared independence from Russia and the Finnish Civil War broke out between White Finland or Whites (anti-Bolshevik) and Finnish Socialist Workers' Republic (FSWR), more commonly referred to as Red Finland, during the country's transition from a Grand Duchy of the Russian Empire to an independent state.

Mannerheim was the leader of the anti-Bolshevik forces who defeated the Finnish Bolsheviks and expelled Russian forces.

Following the civil war, a republic was declared in Finland, and Mannerheim became the chairman of the national defense council. During his tenure, he commissioned the defensive fortification line on the Karelian Isthmus, later called the Mannerheim Line. This fortification was built against any aggressive attack from the Soviet forces.

And when the Soviets eventually attacked Finland in 1939, now known as the Winter War, Mannerheim was the commander in chief. He gained considerable success against the Soviets' numerical superiority with brilliant war strategy but the war ended with the relatively harsh Moscow Peace Treaty on March 13, 1940.

When Nazi Germany invaded the USSR in June 1941, Finland sided with the Germans in a bid to regain lands annexed by the Soviets 15 months earlier. However, the cooperation between Finns and Nazis were limited and previous Soviet aggression helped shape global opinion more favorably for Helsinki than the rest of Germany's allies.

On his 75th birthday, June 4, 1942, the government granted Mannerheim the title of Marshal of Finland. He is the only person to receive the title to date. Mannerheim was named the president of the Finnish Republic in 1944 and held the position until 1946, after steering his country out of the war with relatively favorable conditions and preserving Finland's sovereignty.