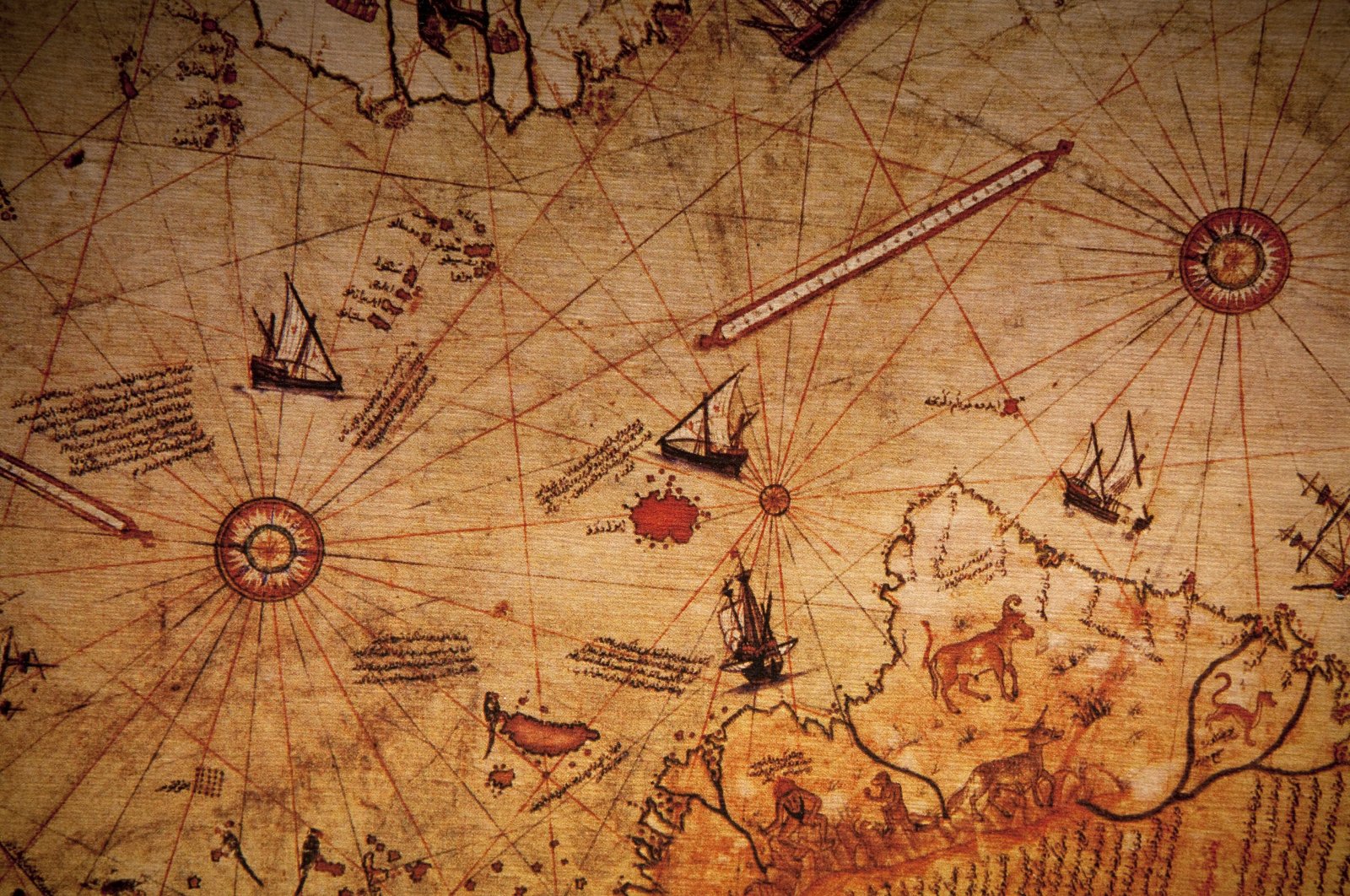 Pioneering cartographer Piri Reis combined his aesthetic taste with maritime knowledge in his works, leaving behind some of the most distinct maps in the history of map-making

Turkish maritime power began to rise during the reign of Ottoman Sultan Mehmed II, also known as Mehmed the Conqueror. With his efforts, Venetian power in the seas was broken, leaving a vacuum replaced by the Spanish and Portuguese navies. Oruç Reis and Hızır Hayreddin Reis, known as the "Barbarossa brothers" and famed for their struggles against the Spaniards in the Mediterranean, would bring Turkish maritime strength to its peak with the support of Sultan Suleiman I, also known as Suleiman the Magnificent. The Ottomans' victories on land were soon paralleled by those on the waves.

At the heart of these achievements was undoubtedly the knowledge of geography, astronomy, geometry and algebra taught in madrassas ( Islamic educational complexes). The Ottomans were familiar with the main maps of the old world from the classic books of Islamic geographers. Ottoman sailors were not a war-fighting group of pirates. They did not achieve their success from legends or prophecies. The sultans encouraged sailors to make maps, memorize the geography of the regions they explored in full detail and make measurements that would minimize error in the route reports.

Thus, in the middle of the 16th century, studies containing fairly accurate information were conducted. Piri Reis, one of the great admirals during the reign of Suleiman the Magnificent, was one of the leading figures who carried out this work.

Ottoman historian Şemseddin Ahmed, better known by his pen name Kemalpaşazade, says of Piri Reis' childhood years: "He grew up in water like crocodiles in Gallipoli."

Having learned seamanship from his uncle Kemal Reis, Piri Reis took part in the transportation of Muslims and Jews who escaped from the Spanish Inquisition during the reign of Bayezid II. He served as a captain in many Ottoman naval wars and improved constantly in the field of cartography.

As well as being a more than capable admiral, he was the most distinguished sea captain of his time, with a vast knowledge of geography and astronomy. There are many others like him in terms of military success, but one feature that distinguishes him from his peers was his gift for designing maps, many of which have survived to the present day.

Piri Reis conveyed his observations and experiences in seafaring, which he started learning with his uncle Kemal Reis, in a book called "Kitab-ı Bahriye" (“The Book of Navigation”). "Bahr" means big lake or sea in Arabic. The book gives detailed information about seas and islands, starting with the villages of Sultaniye, Kilitbahir and Tenedos and continuing with the Aegean Sea, the Peloponnese archipelago, the Adriatic coast, Venice, the Canary Islands, the North African coast, Egypt, the Nile, the Eastern Mediterranean, Crete, Cyprus and the islands and ports of the western coast of Anatolia.

Grand Vizier Ibrahim Pasha requested a clean copy of the “Kitab-ı Bahriye,” which Piri Reis completed in 1521, to be presented to Sultan Suleiman the Magnificent during his expedition to Egypt in 1524. The second text, presented to the sultan by Ibrahim Pasha in 1526, was also edited as a poem by Seyyid Muradi.

Piri Reis depicted each port one by one and decorated his book with pictures of significant buildings found in each. He also showed shallow areas, beaches, safe harbors, cliffs, water resources and settlements. A uniqueness in both colors and style stands out on his maps. In the copy presented to the sultan, there can be found 290 maps of the Mediterranean and Aegean seas. In the following periods, sailors made additions to the book and expanded it further.

Piri Reis' famous map from 1513 was missing for a long time before being found during a study launched at Topkapı Palace in 1929. Halil Ethem, then-director of national museums, examined the map with German orientalist Gustav Adolf Deismann, who was in Istanbul at the time.

Deismann decided to show the map to a close friend, Paul Kahle, a researcher of Islamic geography and cartography. Kahle was invited to Topkapı Palace and reported on the find at the Congress of Orientalists in the Dutch city of Leiden in September 1931.

The declaration was soon translated into other languages and spread all over the world. But Kahle had mistakenly underlined that what had been discovered was "the map of Christopher Columbus."

The map was mistakenly portrayed in this way in both Turkish and foreign media. The reason for this was that the American continent had also been shown on the map and thus it was considered that "since it is Columbus who discovered America, the map must belong to him."

Following this assessment, the Turkish Historical Society appealed to the magazine “The Illustrated London News” to correct these mistakes. An article released later showed photos of the map and Piri Reis’ “Kitâb-ı Bahriye." Further publications were also made – thus rectifying a number of issues.

Interest in Piri Reis' famous map, which was presented to Sultan Selim I, aka Selim the Grim, in Cairo in 1517, has not diminished since its discovery in 1929. Only one part of this world map, drawn up in Gelibolu, also known as Gallipoli, in March 1513, has survived to this day. The remaining parts of the map showed Spain, Portugal, West Africa and the eastern parts of the Americas.

The map contains the names of places, as well as the dates they were discovered, alongside notes and information about the creation of the work.

From these notes, it is understood that Piri Reis made use of 34 maps. Of these, 20 have been updated in the time since and eight are drawn by Muslim geographers, while four can be traced back to the Portuguese. Among these sources, the most striking was a map found in the Library of Alexandria dating back to 2,000 years and a map by Columbus dated 1498, neither of which has survived to this day.

One of the other significant features of the map is that the details are similar to those only depicted in aerial photographs. The most remarkable element can be found in Piri Reis' depiction of the Antarctic coasts, which only modern techniques can show have been sourced from before certain glaciers developed. This means that some of Piri Reis' sources included maps drawn up from before the ice age.

Various collective studies have been carried out on the map, including the search for the mythological city of Atlantis. While searching for the missing pieces in the Topkapı Palace Museum Library, another map belonging to the admiral was found. This piece showed the north of the Atlantic Ocean and the shores of North and Central America.

The map made in Gallipoli in 1528-1529, bearing the signature “Pîrî Reis bin el-Hâc Mehmed” (or "Piri Reis, son of Hacı Mehmed"), was probably made for Suleiman the Magnificent.

Researchers claim that the work, which shows Cuba, Haiti, Florida and the eastern coast of North America, is not actually a world map, but a large-scale, special work made to depict both the Ottoman capital and New World together.

The maps, along with all this vortex of knowledge, show how colorful the Old World was. From Piri Reis' “Kitâb-ı Bahriye” and his fragmented maps, we understand that he was both a meticulous cartographer and a master craftsman.