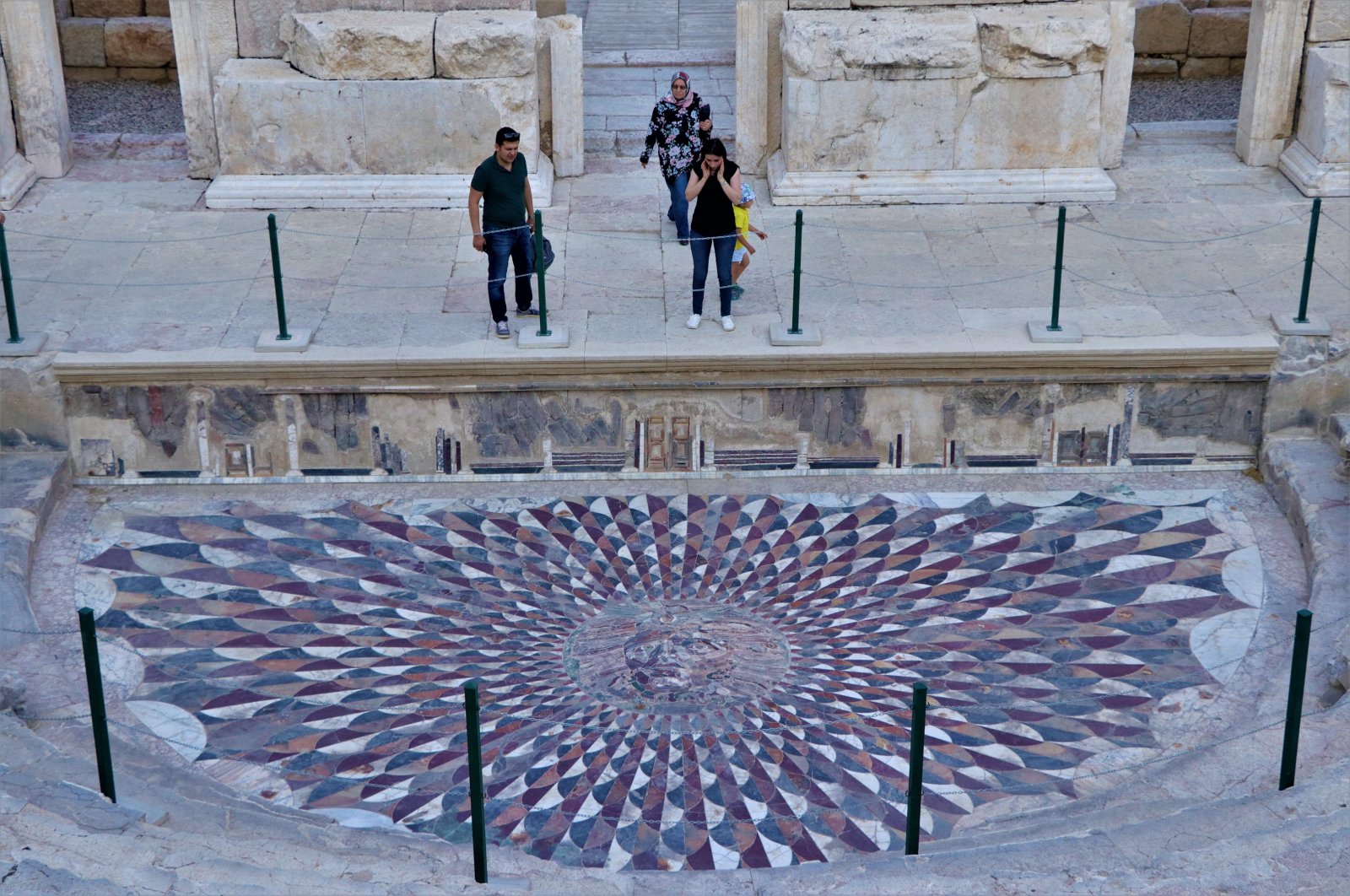 The Medusa mosaic in the ancient city of Kibyra, located in Turkey's southern Burdur province, is covered by five different layers for nine months of the year to protect it from weather damage. Open for visits in the summer period, the mosaic will continue to draw visitors until the end of September.

The nearly 2,000-year-old mosaic depicts Medusa, the "serpent-haired, sharp-toothed female monster" of Greek mythology, and adorns the orchestra section of the 3,600-seat Odeon, which served as a concert venue, parliament, court and covered theater in ancient times.

Reportedly, the mosaic was built of colored marbles with the opus sectile technique in which materials were cut and inlaid into walls or floors to make a picture or pattern, in the first phases of the first century A.D. It is believed that the mosaic of Medusa, whose legend says it could “turn malicious people who look her in the eye into stone," is one of a kind.

Associate professor Şükrü Özüdoğru, head of the excavation team at the ancient city of Kibyra and archaeology academic at the Mehmet Akif Ersoy University (MAKU), told Anadolu Agency (AA) that the odeon structure where the Medusa mosaic is located was unearthed in 2012 after three years of excavation work.

Özüdoğru noted that Kibyra had become famous among archaeological circles thanks to the find, which was restored with support from the Culture and Tourism Ministry. Emphasizing that the Medusa was a unique mosaic flooring made of thin marble plates, Özüdoğru said: “The only Medusa mosaic made with the opus sectile technique and that managed to survive today is in the Odeon of Kibyra as far as we know. For this reason, Medusa is covered for a certain period of time each year for protection.”

Düzgün Tarkan, deputy head of the excavation team and a research assistant in archaeology at the MAKU, stated that the odeon and mosaic were some of the most important structures unearthed in the excavations that have been in place since 2006. Described as “the pearl of the ancient city of Kibyra,” Tarkan said the discovery had drawn crowds of visitors from across the country.

Tarkan said of the odeon: “The Medusa mosaic can be seen in its original form today. Thanks to the Medusa mosaic, interest in the ancient city of Kibyra is increasing with every passing day. We have obtained precise information about both the name and the construction period of the odeon thanks to another geometric-patterned mosaic floor of 560 square meters (6,028 square feet) right in front of the odeon."

Tarkan continued: "When we look at the seating arrangement and capacity of the Medusa mosaic odeon, we can say that it served the upper strata in the city. The ancient city of Kibyra takes its visitors on an ancient journey through history, with its Medusa mosaic odeon, a stadium that could hold 10,400 people, a theater with room for 8,000, an agora with three terraces and a late Roman bathhouse.”

Alihan Kotan, a visitor from the eastern province of Erzurum, said he came to Kibyra to feel its history when he heard about the opening of the Medusa, adding: “It is amazing that such a work was made in antiquity. I strongly advise those who have not seen it to come here.” Buğra Han Yapıcı, another visitor, stated that he admired the odeon and Medusa, adding that the odeon's sound acoustics were magnificent.