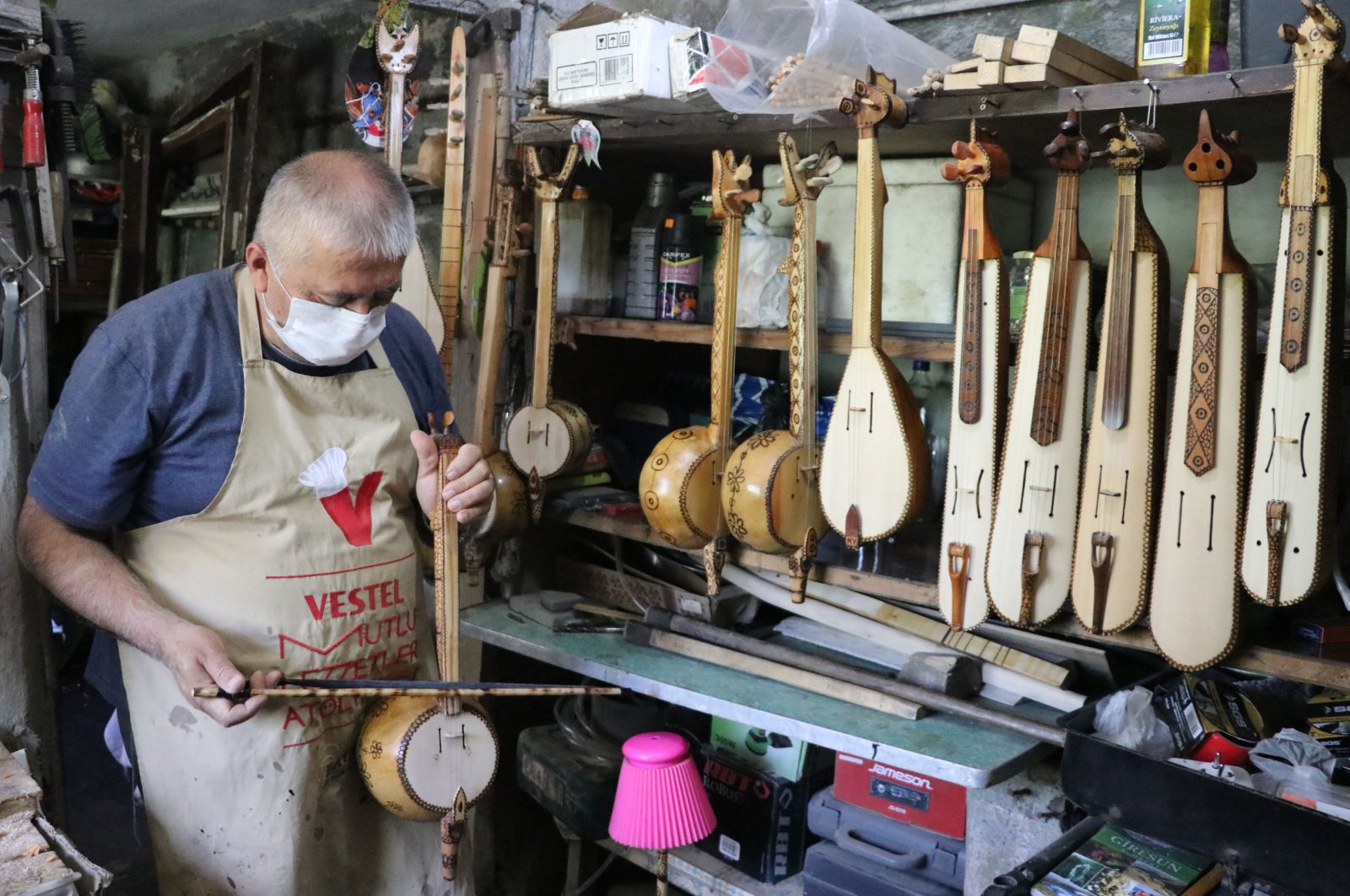 Hikmet Yılmaz, living in the Çaydamar district of northern Zonguldak province, produces kabak kemane, a traditional string instrument with Central Asian roots, and kemençe in the basement of his house, which he has turned it into a workshop.

In an interview with Anadolu Agency (AA), Yılmaz, 60, who is a father of three and grandfather of two, said he was not able to play kemençe during his childhood, despite his curiosity, because his grandfather would not allow it. After the death of his grandfather, he taught himself to play both the kabak kemane and the kemençe without training or even notes.

Over time, Yılmaz improved himself and started producing the instruments. After retiring in 2005, he accelerated his works in the 6-square meter basement of his house, producing kemençe from trees such as juniper, plum and mulberry, and kabak kemane from calabash and various wooden materials from souvenirs and walking sticks.

The instruments Yilmaz produces are now in demand, and he says he wants to continue making them until the end of his life. "I find peace while making and playing them," he added.

Indicating that making the instruments requires specific attention, Yılmaz stated: “Actually I can do mass production, but I have limited opportunities. In this work, paraphernalia is very important. Ours is manual labor, laborious work.” He also noted that it is difficult to put fine details into kemençe production, adding: “What is troublesome in making kemençe is the carving. You do these things with small tools. You rub down and polish inside of it. Kemençe sounds better when it is bright.” He said it takes about a week to produce a kabak kemane or a kemençe.

Yılmaz said his time is worth the effort because those who see his works like them very much. “I love doing this job. I tirelessly work in the workshop from morning to night. I do not want to leave my place while enjoying my work. The instruments made from trees of juniper, plum and ivy produce very beautiful sounds. I have made a kemençe from a pine tree, and it also has given a beautiful sound.” He went on to say that he loses track of time while making kemençe and that despite being engaged in this art for about 30 years, he will try to produce better instruments when he has the opportunity.

Kabak kemane is the only string instrument that has a leather cover in Turkish folk music. Its origin goes back to Central Asia, and it is still widely used in Turkey, especially in the Aegean region of Western Anatolia. It is known by many names including kabak, kabak kemane and rebap. The gijek used by Central Asian Turkmens is of the same root. The kabak kemane is a folk instrument whose body is made from pumpkin or coconut, its chest is leather and it has two or three strings. Its shape differs by region.

The classical kemençe is a pear-shaped, bowed lute that is a very popular musical instrument in Turkey. Its body is normally carved out of tree bark from a mulberry, walnut, plum, maple or lemon tree or from Brazilian rosewood. Firwood is usually preferred for the kemençe's cover, and its strings, which are 45 to 60 meters long, are usually constructed from rose or ebony.

There are various artisans throughout Trabzon's Vakfıkebir, Akçaabat, Tonya, Maçka and Sürmene districts that successfully build these instruments despite not having any specialized education in the craft, leading to a variety of regional methods of making kemençe.