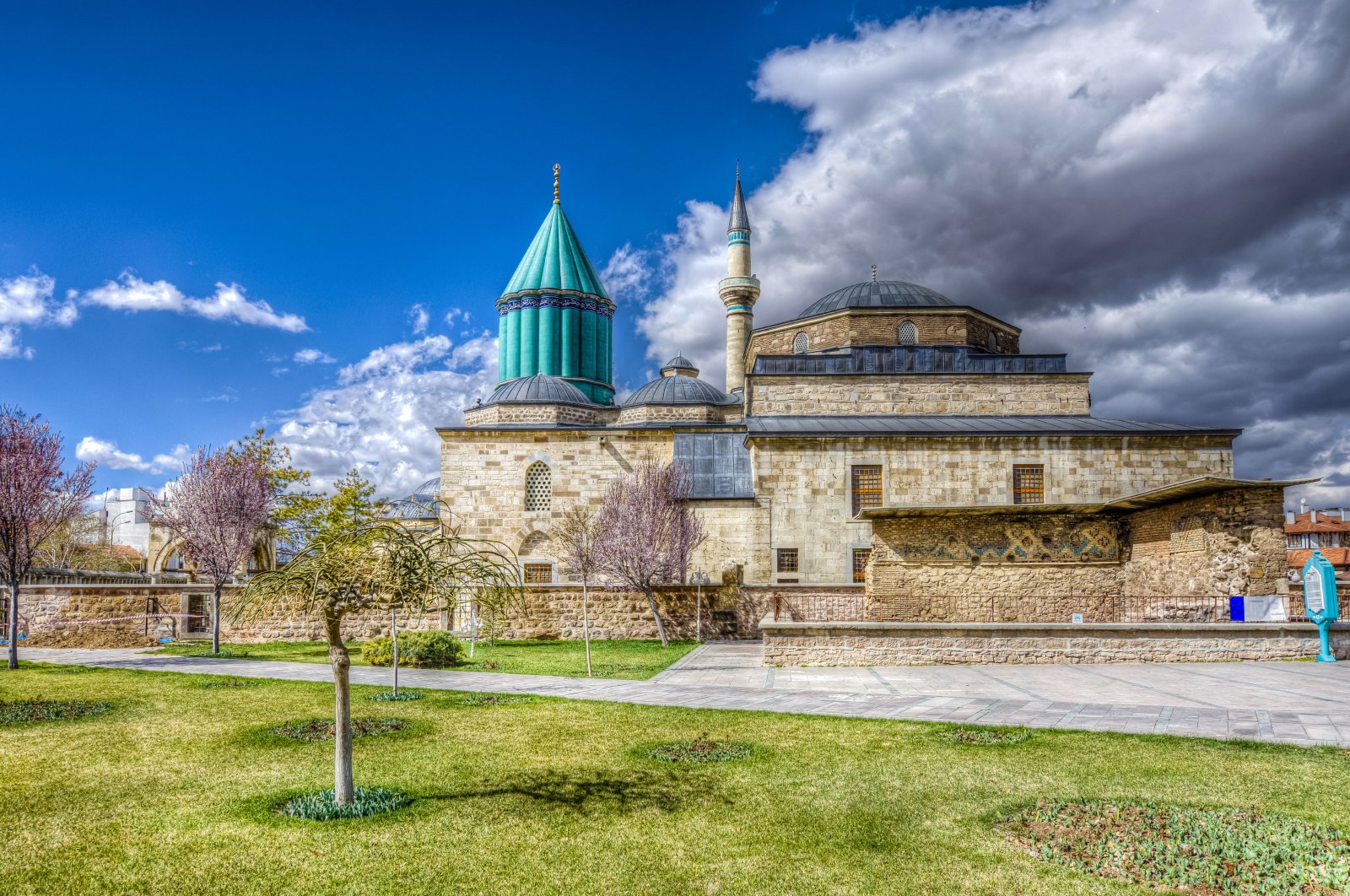 Mevlana Museum is one of the most-visited places in Turkey. (iStock Photo /Nejdet Düzen) (The photo source is for paper, I will delete and write just iStock Photo for web, please don't delete the name)
by Anadolu Agency Jun 16, 2020 1:01 pm
Edited By Irem Yaşar
RECOMMENDED

The turquoise tiles adorning the Kubbe-i Hadra (Mausoleum) in the Mevlana Museum, often called the “Tomb of Rumi" or "Shrine of Rumi,” in central Konya province will undergo its most extensive restoration since 1960.

The turquoise dome was built in the 13th century and was given its present shape during the reign of Suleiman I, also known as Suleiman the Magnificent. The dome has been repaired and maintained many times, but it has been 55 years since the last works were completed.

Konya Culture and Tourism Manager Abdüssettar Yarar spoke at a press conference, held in the museum's inner courtyard, about the restoration and landscaping, saying that the roof was named “The Green Dome” as it is covered with turquoise tiles.

Pointing out that Mevlana Museum has been the center of the world's Mevlevi lodges since the Seljuk period, Yarar noted: “It has been serving as a museum since 1926, gaining worldwide recognition and becoming the and most-visited place in Konya after it took the name Mevlana Museum in 1954. The tiles of the Green Dome have been renovated many times.”

According to Yarar, the tiles have been changed seven times – in 1698, 1798, 1816, 1835 and 1912 during the Ottoman era and in 1949 and 1964 during the Republican period. The Green Dome was also repaired and maintained in 1955 and as part of larger-scale renovation work in 1965 when tiles on the dome were replaced by ones produced at the Kütahya Tiles Factory.

“The tiles of the dome have been worn from the past until now, and as can be easily seen from the outside with the naked eye, the tiles have started to swell and spill,” Yarar said.

He also stated that the Provincial Directorate of Culture and Tourism started its work on the Green Dome as a result of detailed analyzes and evaluations made by the science board formed in 2017, who decided to renew the tiles and have them manufactured in a traditional style.

Yarar explained: “As a result of the studies carried out by the science board, it was decided that blue turquoise-colored tiles should be produced based on samples from the years 1816 and 1835 in the museum's archive. The Green Dome has not been renewed for 60 years, and it will be restored with approximately 10,500 tiles manufactured in 300 different sizes.”

Green is color of faith

Konya Metropolitan Mayor Uğur İbrahim Altay underlined that green is the color of faith and represents peace and tranquility, saying: “It is a turquoise green that represents our culture. It is a blend of our belief and culture. Rumi is the pen of love, the symbol of peace and the umbrella of brotherhood. Hundreds of thousands of men of love who flock to Konya every year to find peace in the shade of that green umbrella, find remedy for their troubles. The Green Dome is not just an architectural structure that represents our past. It is one of the most obvious signs of the belief and culture that we represent. So much so that, wherever it is seen, it reminds of Islam, Konya and Rumi. It is the symbol of our city, the paint of our faith and the yeast of our culture.”

According to Altay, even when viewed from a distance, one can see the dome needs repair.

Restoration on the finer details will be carried out in line with cutting-edge technology.

The program was attended by Ali Akkanat on behalf of the Akkanat Education and Health Foundation, which will cover the expenses of the restoration, as well as Justice and Development Party (AK Party) deputies from Konya – Orhan Erdem, Hacı Ahmet Özdemir and Gülay Samancı, AK Party Konya Provincial Head Hasan Angı, some mayors and Esin Çelebi, a 22nd-generation descendant of Rumi.