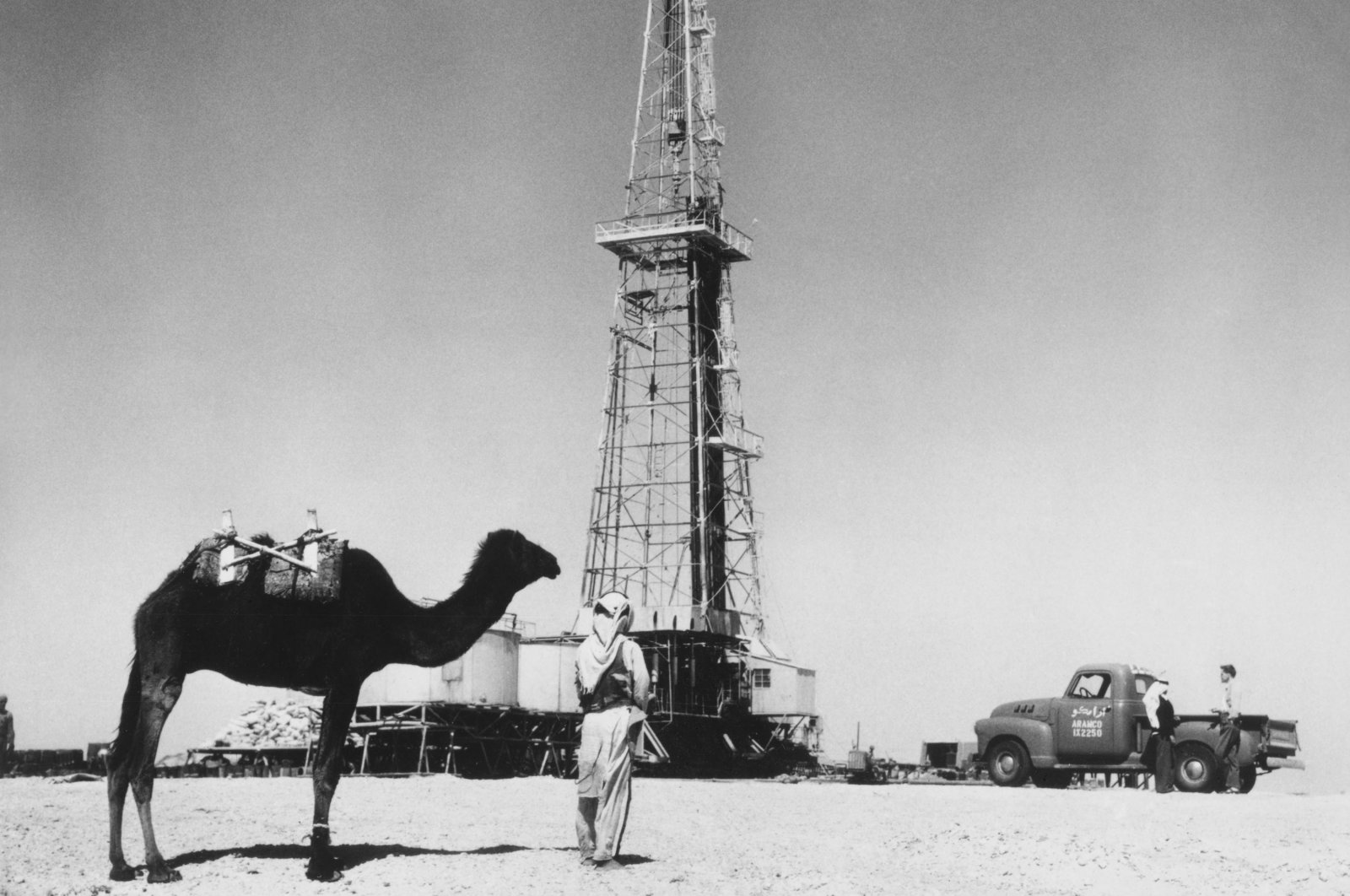 The Middle East stands upon the riches that the entire world desires, namely oil, and throughout the last two centuries that oil has had a bumpy ride as numerous nations and powerful companies laid claim on the reserves, with a Mr. Five Percent in the mix

International relations, especially for Western states, are based on interests, not religious or national reasons. Therefore, when looking at history, it is necessary to set aside our religious and national feelings to not to lose sight of the real causes of the events. It is useful to look at the collapse of the Ottoman Empire in this way: In the 19th century, the Ottoman Empire was sitting on top of a great resource: oil. The competition between the colonial states, the developments in the industry and the discoveries in the automobile engine made this resource even more attractive.

The British Empire discovered Mesopotamian oil reserves in 1871. Immediately after, it sent oil experts to Ottoman lands under the guise of archaeologists. In America, the first oil was extracted in Pennsylvania in 1859, and the Standard Oil Company was established in 1870 under the leadership of John D. Rockefeller. By 1880, Standard Oil had turned into a giant cartel that controlled 95% of the American oil market.

With Germany's participation in the colonial race, albeit late, a fierce competition began between the United States (Standard Oil Company), which owned more than half of the world's oil production, and Britain (Shell) and Germany (Deutsche Bank) who were trying to have a share of the cake that was Middle Eastern oil.

Sultan Abdülhamid II knew that Mesopotamian oil was whetting the appetite of his rivals and the real intentions of the men working on his land under the label of archaeologists. He bought time by maintaining a balanced foreign policy between Britain, Germany and the U.S.

He had reports prepared on the oil of the region. In addition, he bought the oil fields from the state treasury, the Hazine-i Hümayun, and registered them in his personal treasury, namely the Hazine-i Hassa, so that they would not be lost after a possible war due to escalating competition.

Istanbul-born Ottoman-Armenian Calouste Sarkis Gulbenkian was an oil genius. His father was a tax collector for the Ottoman Empire. Gulbenkian knew Ottoman geography well, as he traveled a lot with his father. In his youth, he worked in Baku at Mantashev Oil Company, a subsidiary of Asiatic Petroleum, whose main partners were Royal Dutch, Shell and the Rothschild family.

After his experience in the Caucasus, Gulbenkian did his internship in London with Frederick S. Lane, who ran the Rothschild family's oil operations. He was instrumental in the merger of the British Shell firm and Royal Dutch of the Netherlands in 1907 so that it could compete with the near-monopoly of Standard Oil.

In 1903, the Ottoman Empire signed the Baghdad Agreement and granted Germany a concession on the oil reserves with a 25-kilometer (15-mile) radius of the Baghdad Railway. Toward the end of 1907, rumors spread that Deutsche Bank was trying to establish an oil monopoly in Mesopotamia by using its political influence over the Ottoman Empire.

The Germans wanted to extend the Baghdad Railway from Konya to Baghdad into Mesopotamia. This gossip meant the end of the game played by Sultan Abdulhamid.

Gulbenkian opened an office in Istanbul on behalf of Royal Dutch Shell. With the Young Turk Revolution of 1908 that followed, the monopoly dreams of the Germans were destroyed: Now the British were also in the market. As soon as the Young Turks came to power, they transferred the sultan's private oil fields back to the Treasury. They also appointed Gulbenkian as financial advisor to the government.

Standard Oil was split into smaller companies such as Exxon, Chevron and Mobil in 1911, on the grounds that it had become a monopoly. Rothschild also sold his shares in Baku oil to Royal Dutch Shell in 1912. Gulbenkian founded the Turkish Petroleum Company (TPC) in the same year. The share distribution of TPC was as follows: Deutsche Bank, 25%; Gulbenkian, 40%, and the Turkish National Bank, which was established in Istanbul by the British after the Young Turk Revolution, 35%.

The interesting thing was that although both companies were Turkish in name, neither the Turkish National Bank nor TPC had any Turkish shareholders.

Gulbenkian later transferred 25% of his own shares to Royal Dutch Shell. The Turkish National Bank was dissolved after the inclusion of the Anglo-Persian Company (APOC, later British Petroleum) belonging to the British government. The new distribution of TPC shares was as follows: Deutsche Bank, 25%; APOC, 47.5% and Royal Dutch Shell, 22.5%. Gulbenkian's share fell to 5%.

After that, Gulbenkian would be famous as "Mr. Five Percent."

As the shareholders of the company, Britain and Germany agreed to share the oil fields of the Ottoman Empire among themselves. On June 28, 1914, one month after the Young Turk Government gave the concession of oil reserves in Mosul and Baghdad Region to TPC, World War I would begin.

Although it made promises, Britain did not want Germany as a partner in Mesopotamia. It opened the London Stock Exchange, which had been closed to the Russians since the Crimean War, to the ministers of the tsar, and drew Russia to its side. It forced the Young Turks to approach Germany, and the expected world war began.

Along with the war, Britain placed a lien on German shares in the company. Armenians under Russian influence in Anatolia, who prevented oil transportation, were exiled by the Young Turks. Two years later, the Bolsheviks, including Stalin who had risen in fame with his strikes at the Rothschild oil refineries, seized power in Russia. Thus, Standard Oil, which disabled the British companies, then made an agreement with the Bolsheviks for Baku oil.

Britain offered an independent Arab state to Sharif Hussein and drew the Arabs to its side. While the English spy T. E. Lawrence was distracting Sharif's son Faisal with the aforementioned offer, the British Mark Sykes and the French Georges Picot had already concluded the agreement dividing Arab lands between Britain and France. Palestine, the Persian Gulf and eastern parts of Iraq were Britain's, while parts of Turkey, including Mosul, Syria and Lebanon, would belong to the French. The remaining lands were to be divided into semi-independent Arab states.

However, APOC, which discovered the Mosul oil before the war, was not satisfied with this agreement. It didn't want to leave Mosul – which had huge reserves – to the French. Then, Turkey, with the collapse of the Palestine Front that included Mustafa Kemal Pasha, withdrew from the war. Thus, the war ended and the Turks and Germans left Arabia and Mesopotamia. England, not content with Arab lands, took the armistice as an opportunity and landed soldiers in Mosul.

England, which controlled the inland seas thanks to the Suez Canal, did not want to lose control of the Dardanelles and Bosporus straits. Arms dealer Basil Zaharoff, one of the shareholders of APOC, talked to his close friend, British Prime Minister Lloyd George, and persuaded Greece to occupy Anatolia. Britain would use Greece under its control as a shield to protect the straits by placing it in Istanbul and Çanakkale.

In April 1920, England made an agreement with France in San Remo. The French left Iraqi oil, including Mosul, to the British in exchange for Syria and a 25% stake in TPC. Thus, the shares of Germany – which was defeated at the end of the war – and Syria – which was promised to Faisal – were given to the French. Britain, which created a new state called Iraq, put Faisal, who was left idle, as the head of this state.

Zaharoff owned companies, banks and newspapers in France. Here he was acting on behalf of both Royal Dutch Shell and APOC. He was meeting with some prominent bureaucrats and politicians of France and was giving these politicians shares in the company. That's why France was tolerating Britain's selfish policies. But America was not willing to leave the cake to the British government.

Standard Oil became a partner in Banque de Paris et des Pays Bas (BNP Paribas) controlled by Rothschild in France and made a rapid entry into France by purchasing the Matin newspaper. Through the bank, Standard Oil's French arm was established: Compagnie Standard Franco-Americaine. The company bought some politicians and lured them to its side. The American government announced to France that all aid and oil shipments from the other side of the Atlantic would be stopped if the interests of Standard Oil were ignored. The Treaty of Sevres, which disabled Standard Oil, became void at the request of the United States.

France, which was dependent on the United States for oil imports, had to approach Standard Oil. French politician Henry Franklin-Boullion went to Ankara and signed the Ankara Agreement with Mustafa Kemal, the new leader of the Turkish National Movement. In return for the assistance to be given to him, the operation of all the oil that is or will be found on Turkish soil would be given to Standard Oil. Thinking that Mosul would remain with the Turks, Standard Oil hoped to get Mosul oil in this way.

The victory of Mustafa Kemal, who received the support of the Bolsheviks in exchange for Baku oil and the support of France and America in exchange for Mosul, was now inevitable. Mustafa Kemal first marched on Izmir, then on Çanakkale and Istanbul. He succeeded in driving the Greeks out of Anatolia, which in turn led to the overthrowing the government of Lloyd George in Britain.

Unable to withstand the pressures of the United States, England, in Lausanne, agreed to put the straits under the control of an international commission. The Mosul issue, on the other hand, could not be resolved. The file was referred to the League of Nations. After long negotiations with British companies, America gave up its demand in the Ankara Agreement. Thereupon, the League of Nations returned Mosul to England. In return, Britain agreed to give the Americans shares in TPC in 1928.

The companies came together again. Some 23.75% of the firm was given to American companies Exxon, Mobil and Gulf; 47.5% to British firms Anglo-Persian and Royal Dutch-Shell; and Standard Oil's French ally, the Compagnie Française des Pétroles, founded in 1924, was given 23.75%. The remaining 5% was again, of course, given to Mr. Five Percent.

Everyone agreed to their share, but this time they disagreed over the borders of the Middle East oil fields. A border had to be determined for Middle Eastern oil, and no one should be looking for oil outside this border. Thereupon, Gulbenkian drew a red line on the map. That line encompassed almost all of Anatolia and the Arabian Peninsula, to which he said, "This is the Ottoman Empire I knew in 1914. I should know because I was born there, lived there and served there. If anyone claims to know better, be my guest."

Everyone agreed to this frontier.