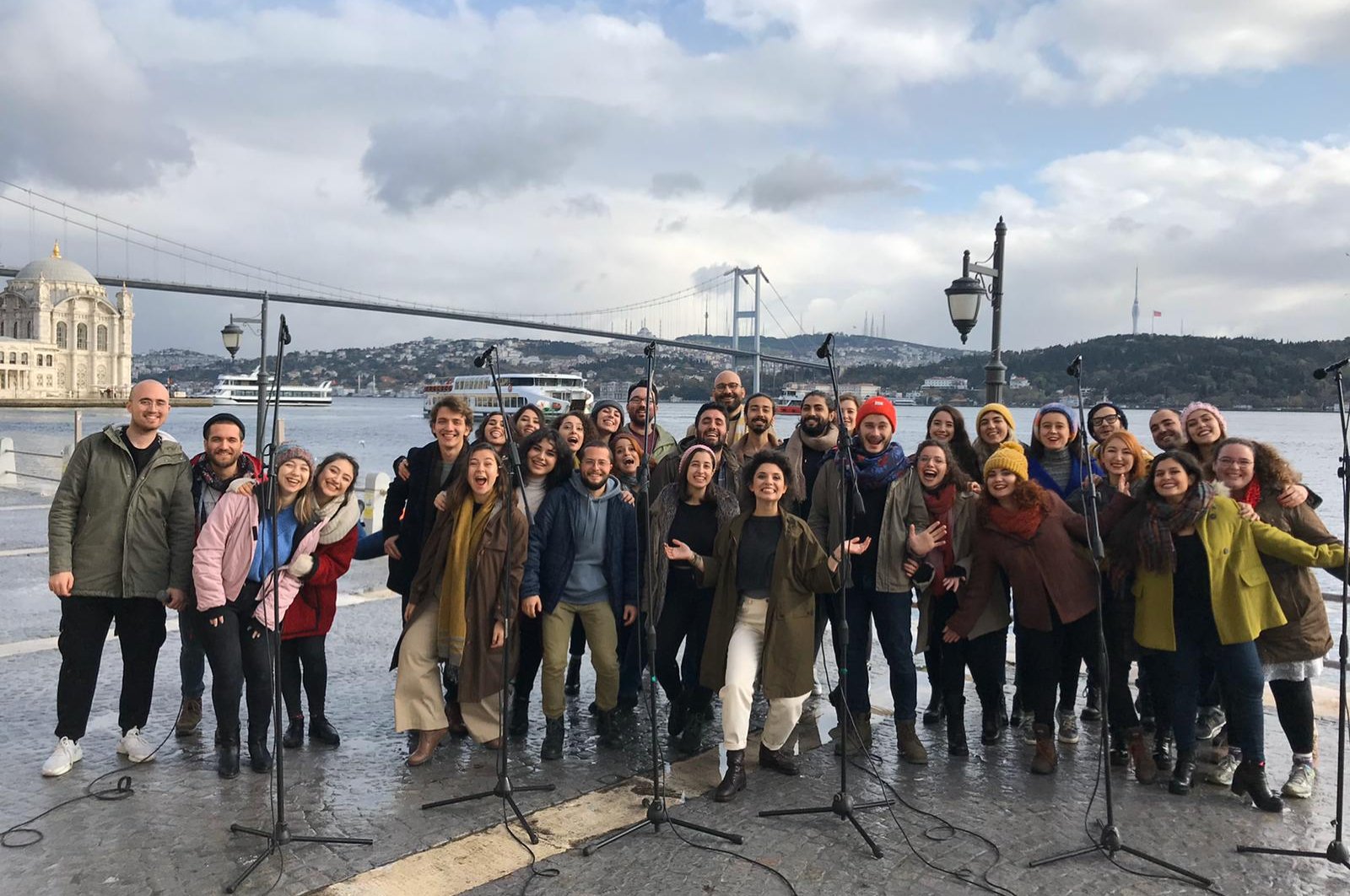 Chromas Choir performs near the Bosporus in a worldwide campaign against climate change, Istanbul, Turkey, Dec. 11, 2019. (Photo by Chromas Choir)
by Elissa Carlson Apr 19, 2020 11:30 am

Staying home to flatten the curve of the coronavirus outbreak did not stop a Turkey-based choir from virtually coming together in song, transcending physical boundaries and sharing their music with the global community to spread a message of unity in difficult and uncertain times

Half of the world is in lockdown, nonessential businesses and schools are closed, events canceled, but none of this stopped the 36 chorists in Chromas from coming together virtually in the comfort of their homes to bring us joy through music.

Meet Chromas choir – founded in 2015 by conductor Başak Doğan, the a capella choir brings together members from different occupations, unique backgrounds, and various walks of life in the heart of Istanbul. In only five years, the choir has performed everywhere you could imagine, from international festivals to crowded concerts, from weekly rehearsals to the streets, and now, right on your digital screens.

Like the rest of the world, Turkey has urged its citizens to stay home to curb the spread of the coronavirus in the country. Forced to think outside the box, Chromas decided not to let the absence of in-person rehearsals stop them from what they do best – creating together, being together and performing together. After the close-knit group continued to meet often via video call, it was not long until they found a solution to the distance that was keeping them from creating music together. Determined to transcend the physical boundaries of their homes, every singer recorded their own part to the conducting of Doğan. The recordings of the a capella arrangement were later pieced together via Adobe Audition and Final Cut Pro to create a collective virtual choir concert, all while staying home in different cities across Turkey.

Their first virtual concert was released via their Instagram account on March 28 to the tune of Gemiler Giresune, a Turkish folk song, reaching an audience of nearly 30,000 people from all around the world and representing Turkey through the power of music and unity. The choir released yet another performance to their rendition of the popular Coldplay song, “Fix You.” When asked if their audience could expect more virtual concerts soon, Beste Karaduman, the social media representative of the choir, said: “Yes, of course! We loved the response that we got from our audience around the globe, and we genuinely loved that we are still able to sing a song together from the comfort and safety of our homes during these hard times. We won’t give up creating together, so you can expect more virtual performances coming soon!”

Karaduman continued, saying: “We have always believed that singing together can change the world and make it a better place. Now, due to the coronavirus, we are not able to physically be together and sing together. However, this should not keep us from trying to make the world a better place. We still felt compelled to sing together. Transcending the physical boundaries gave us hope for a better future in today’s conditions, and we loved the idea of sharing this hope with our audience. We wanted to spread our music to remind everyone that we are still united, in purpose and in music, even though we're staying at home and flattening the curve!”

After receiving an overwhelming response from viewers from all around the world, the group decided to open up their virtual choir for more musicians, offering auditions for those who want to take part in their virtual performances while stuck at home. Some 360 people from around the world signed up to unite their voices for Turkey's first open-to-all virtual choir, with many more opportunities for online performances coming soon.Videos were submitted from 61 cities and 14 countries, including the United States, Austria, Greece, Germany, Azerbaijan, the Netherlands, Lithuania, Poland, the United Arab Emirates, Spain and Turkey. In Turkey, the choir now will have participants in 42 different cities across the country. The choir of 360 will be the largest a cappella choir in Turkey, bringing together people from all different backgrounds through the power of music. For now, the next song that the group of over 300 will preform is another Turkish folk song named, Dere Kenarında Taş Ben Olaydım – don't miss it!

Although we are unable to see this group in person for at least the next month, we can still share in the joy of the music they create online. To not miss their next virtual performance, be sure to follow Chromas on Instagram at chromaschoir or subscribe to their Youtube channel, Chromas.