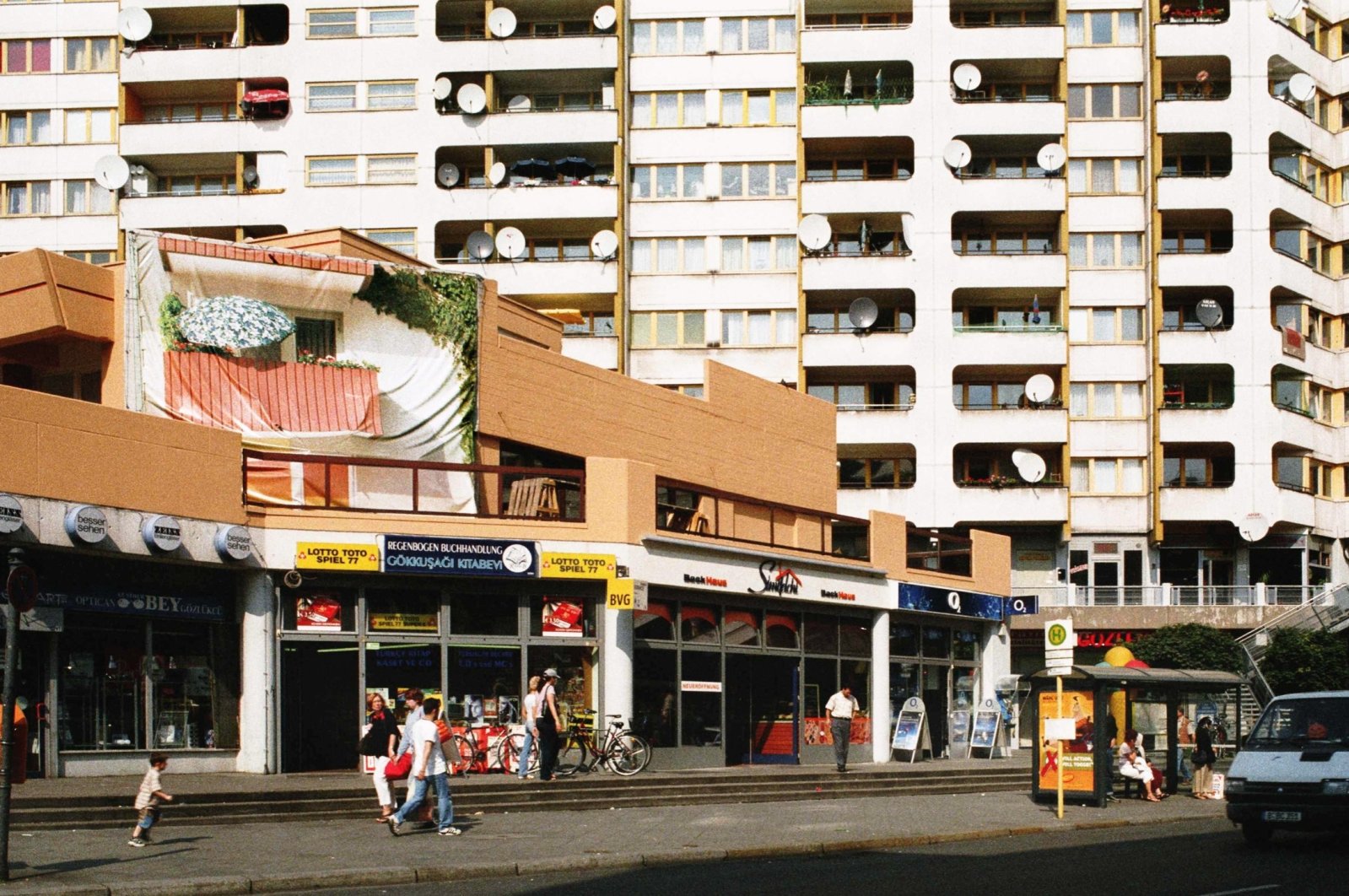 Carving out a special identity for itself in its new German home Kreuzberg, Turkish hip-hop rose from the streets of west Berlin in an environment contrasted by gangs, celebrities, immigrants and several cultures

Kottbusser Tor – or Kotti, as it is affectionately called by Berliners – is the secret heart of west Berlin. It is a pulsing center of street life full of often unpleasant and violent contrasts. It is a place where Turkish migrants and hedonist hipsters mix like oil and water, brushing shoulders, but wrapped up in their own separate worlds. It is also the genius loci of Turkish hip-hop.

Here in SO36, the old postcode for this section of Berlin, a Turkish street gang came into being in the mid-80s that has since become part of the Kreuzberg myth. In a time when West Berlin walls were daubed with Türken Raus! (Turks out!) slogans and Turks had house bans, 36 Boy gang members sought strength in numbers to the fight against racists and neo-Nazis.

The 36 Boys would go on to boast a stellar alumni, including a world champion kickboxer, a critically acclaimed film and theater director, a celebrity chef (the only German in the gang), a German-Ghanaian rap star who later went on to join and die while fighting for Daesh terrorist group, and perhaps one of the most famous Turkish rappers, well known both among German Turks and hip-hop fans in Turkey, a man known as Killa Hakan, whose latest hit “Fight Kulüp” currently boasts 68 million clicks and counting on YouTube.

Arriving at Kottbusser Tor by elevated train, you pull into a messy hub of six traffic-snarled streets that conjoin Cairo-like under a sprawling, 12-story brutalist housing complex from the 70s, known as the Neue Kreuzberger Zentrum, or NKZ for short, or Kreuzberg Merkezi by neighborhood Turks. Under its shadow, immigrant shop owners conduct brisk trade.

In one of Kotti’s modern casbah-like alleyways, Killa Hakan’s parents ran a small bakkal, or grocery shop, up until recently.

Killa Hakan had, by his own account, a troubled youth. A gang member and a gangster who once did time for a botched heist of a Kreuzberg jewelry shop, he got turned on to rap music in prison when he heard the music of Islamic Force, a legendary early West Berlin Turkish rap group whose song “My Melodie” came as a revelation to a generation of young immigrant hip-hop youth.

When they heard it in the disco, the arabesque Ibrahim Tatlıses sample, followed by “Kick the melody, kick, kick the melody...” all the Turks flipped out, took each other by the hand and danced halay, a folk dance of Anatolia.

Outsiders saw the name as antagonistic and a provocation, but actually Islamic Force had nothing to do with Islam.

On the cover of their album, Mesaj was a quote from a poem by the Anatolian poet Yunus Emre: “Our name is modesty. Our enemy is hate. We don’t hate anyone. For us the whole world is one.” Ultimately, they switched their name to Kan-AK so as not to offend any conservative Muslims.

Islamic Force frontman Boe B, weaned on hip-hop films “Beat Street” and “Wild Style,” hung out at the Naunyn Ritze, Germany’s most famous youth club, on Naunyn Strabe, rapped in English, spreading the word of American old-school hip-hop in the community. He was Kreuzberg’s hip-hop guru, a mouthpiece and a proponent, whose enthusiasm for hip-hop was infectious.

“It was through Boe B that I got into music," Killa Hakan said. “He discovered me. Before that, I was 36 hardcore. Still am. I was in a gang then, had no interest in music. I had a lot of problems because of misunderstandings: you and us, Turks vs. Germans, blah-blah ... Always problems, and gangs and then, of course, I was in prison. Boe B was the only guy who said to me, ‘hey, don’t waste your life.’ When I got out, I devoted myself to hip-hop.”

Just like old school American hip-hop has its founding mythos, so too does Turkish hip-hop, which has its roots in not only in the music of Islamic Force but in a hit single by German-Turkish rap crew Cartel, whose eponymous song “Cartel,” sold 300,000 albums in Turkey and stormed the charts, knocking Michael Jackson off the top-notch in the summer of 1995, and filling football stadiums in Turkey.

Cartel, with their gritty, street-wise lyrics referencing the daily struggles of Turks in Germany as well as expressing a strong sense of Turkish identity (critics said “chauvinism”), spawned a generation of Turkish home-bred rappers. Suddenly it was okay to rap in Turkish, and with a healthy dose of patriotism to boot.

“Cartel was definitely an inspiration to all of us,” says Turkish star rapper Ceza (meaning “punishment” in Turkish), speaking from the basement of a Turkish bar on Oranien Strabe, Kreuzberg’s main thoroughfare.

“I was 18 when I first heard them. And that was the point of time when I said to myself, ‘Oh, yes, that is the way to do it.’ I was writing my lyrics before that, but Cartel really gave me the push. I can say overall that hip-hop done by Turkish immigrants in Germany definitely inspired us.”

Ceza is at home in Kreuzberg, frequently staying here for months at a stretch, crashing at Killa Hakan’s Kreuzberg pad when he comes. Periodically he puts on shows in Kreuzberg.

It doesn’t bother him that only a couple hundred German Turks come to his concerts, which pale compared to the thousands that come to his Istanbul shows, where he has teamed up with some of Turkey’s best artists, including Sezen Aksu, Müslüm Gürses, Yıldız Tilbe and Candan Erçetin.

Not only does Ceza make frequent trips to Berlin, Kreuzberg, but Ceza’s sister, Ayben, a rap star in her own right, and the first Turkish female rapper to rap in Turkish, is also considering making Kreuzberg her permanent address.

Speaking from a Kreuzberg bar together with Volkan T, a Turkish rapper from Frankfurt, who has been living in Kreuzberg since the mid-90s, and with whom Ayben is collaborating on various projects, Ayben explained to me how she comes to Kreuzberg once or twice a year, staying for several months at a stretch.

“The first time was with my brother,” Ayben said. “It was a European tour. German tour. That was 2005. At first for work. And then I got married to my husband, who is studying here. And then I started coming because of him.”

Asked if she finds the Berlin Turks different than the Turks in Istanbul, she said: “There are differences. I’m dealing with two different societies. One is the artist scene, especially back then with Ballhaus Naunyn and Gorki Theater (two Berlin cultural institutions). And then there’s a completely different scene. It’s much easier to talk about Turkey here in Berlin.”

Whereas in the past, no one wanted to know about the Turks who lived here, today they are viewed as exotic purveyors of atmosphere.

“Kreuzberg today is completely different than it was when I first arrived in the mid-90s,” Volkan T said. ”Here in the Wrangelkiez there were only two bars. One of them was the bar that we are sitting in now. Aside from that, there were no locales. Only a Bosnian cafe and a Turkish cafe here. And no galleries, no clothing shops. Around 2002, 2003 it started to change radically.”

“Of course, many people have moved here and they are building things and want to do new things,” Killa Hakan said.

“Rents are going up. But if we (the Turks) are no longer here then Kreuzberg won’t be what it was. When the shops aren’t here, when our parents aren’t here ... For the time being, Kreuzberg is still a small Istanbul.”