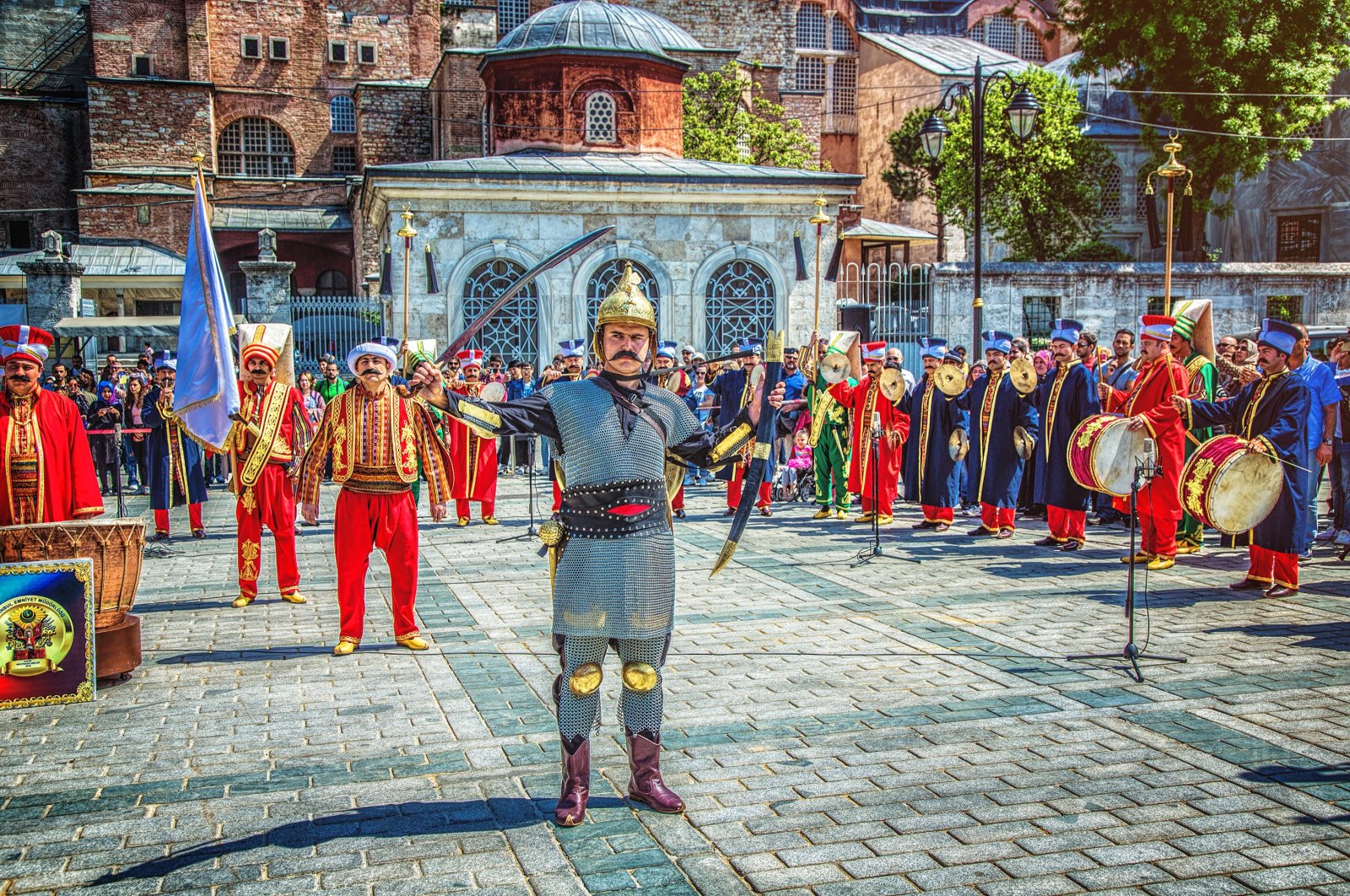 The Ottomans' 'Mehter' military band, which spread fear to the enemy in times of war, became a source of inspiration for Europeans, deeply affecting their music style

Turquerie, the 17th century European trend of following Turkish fashion, manifested itself in many areas of art in Europe.

Turquerie had an obvious influence on music, which has been one of the most vivid forms of art since the 17th century. As Turkish fashion spread, one of the things that aroused the interest of Europeans the most was the Ottoman military band, or "Mehter." When Western musicians heard the Mehter's tunes, they formed a musical movement known as "Alla Turca," which means Turkish style in Italian. Nearly 150 works of operas and ballets dealing with events concerning the Turks were written in 18th century Europe.

The word "mehter," or "mihter" in Persian, represents a combination of the words "akber" (greater) and "azam" (very great, exalted) in Arabic. The plural of the word is “mehteran.” The place where Mehter bands practiced was known as a "mehterhane."

In the Ottoman Empire, the word “mehter” was used for tent makers, band players and the music they performed. It entered Turkish and was used to refer to the officers who maintained the sultan’s tent and carried the banner of the sultanate.

For Turks, even before the Ottomans, the military band was a sign of sovereignty. Therefore, there were various musical instruments such as drums located where the sultan was, and a regular concert called the "nevbet ceremony" was performed at certain times of the day when necessary.

Indeed, Seljuk Sultan Kayqubad III of Rum sent a drum, along with a flag and banner, to Osman Gazi, the founder of the Ottoman Empire, as a sign of his beylik's sovereignty. In later periods, the band performed concerts in the palace during times of peace and in front of the sultan’s tent during military expeditions, and the sultan listened on foot to pay homage to Sultan Kayqubad III.

However, Sultan Mehmed II, aka Mehmed the Conqueror, abandoned this tradition, saying, “It is no longer necessary to stand for a sultan who died 200 years ago."

The sultan’s Mehter, called "Mehter-i Hâkânî," performed concerts every day after afternoon prayers. In addition to these concerts, with a regulation introduced by Sultan Mehmed the Conqueror, a three-part performance was held after the night prayer every night except Friday, and another three-part performance was held in order to wake courtiers for the morning prayer. These concerts were also held after Bayram holidays, also known as Eid, after Friday prayers, at royal wedding ceremonies and births, at the reception of ambassadors, at the ceremonies of appointment of the viziers and governors, and when news of a victory was received. The Mehter band played in various districts of Istanbul as well as in every castle in the cities throughout the empire.

The Mehter’s main task was to play in preparation for war and on the battlefield. They encouraged soldiers to be dynamic in battle, kept them awake during watch and instilled fear in their enemies.

While the Ottoman army was passing near important points within its territory, the Mehter performed to announce the troops' arrival or departure from each city, to inspire trust in the people. The march of the army during campaigns was also led by the Mehter. From the moment they entered an enemy land, the band played more intensely, and the plains and mountains resonated with the sound to fill the enemy with dread even before they encountered them.

The Mehter played music many times over the course of expeditions. In order to declare the good news of the conquest of a castle or a city, the Mehter played marches as a flag was raised over the new conquest.

When castles were surrounded, attacks were carried out at certain intervals to bring down the castle. A different tune was played to ensure the regrouping of troops and another to signal breaks. All these compositions were intended to maintain the soldiers’ bodily and spiritual state of mind. The heroic melodies played while going to wars were built on the idea of instilling courage in troops and fear in the enemy during battle. The influence of the Mehter March not only on soldiers but also on beasts was also taken into consideration.

Music can have both positive and negative impacts on animals during battle. The Turks realized that some melodies made animals more efficient in war. Horses would be more active when strutting to the sounds of the Mehter and, like the soldiers, they would grow emboldened, rearing up and routing the enemy.

During battle, the cries of thousands of troops, horse whinnies and crashing swords cause a considerable racket. Adding to this the sound of the Mehter spread terror among enemy ranks. Western historians noted that the sound of drums, the "kös" (large kettledrum), "naqqara" (a Middle Eastern drum played in pairs) and "zurna" (shrill pipe), and the sounds of horses and soldiers caused a fright powerful enough to scare the enemy to death.

From fear to art

Ottoman armies were no longer seen as an element of fear after the thrashing they received in the second Siege of Vienna (1683). Fear was replaced by curiosity and admiration, and the Mehter was one of the sources of this admiration. When German composer Richard Wagner listened to the Mehter, he could not help but say, “that is what we call real music.”

The Europeans could not forget the magnificence and grandeur of the loud tunes of the Mehter music for a long time. Until the 1700s, European military music consisted mostly of wind instruments. They began to take basic rhythms from the Mehter for their percussion instruments. It was a turning point for military music as well as for classical music. Over time, they brought changes to ensemble music, laying the foundations of the present military band.

In the mid-1700s, the Mehter were loved for their clothes, instruments and music; and quasi-Mehter bands were established in European armies, especially in Prussia, Russia and Austria, some of them even playing Turkish marches.

Wolfgang Amadeus Mozart was the composer who introduced the name “Turk” to music during the classical period from which Turquerie emerged. He was impressed when he listened to Turkish Mehter troops arriving in Vienna with Ottoman envoys. So, he wrote many piano sonatas, concertos and operas in “Alla Turca” styles.

Mozart, whose art encompassed magical tales of the East, added more percussion instruments to his works under the Mehter's influence and created a "Turkish music" according to his own understanding. In this way, he took listeners out of the air of classical Western music and dragged them into an exotic atmosphere. “Rondo-Alla Turca,” the last part of the Piano Sonata No. 11 (K. 331), which he wrote in Paris in 1778, and “Die Entführung aus dem Serail” (“The Abduction from the Seraglio”), which he wrote in 1782, are among his most famous works in this style. In addition, Turkish musical motifs are seen in his many other operas.

The Mehter band, one of the most important units of the army, was an organization mainly affiliated with the Janissaries, whose power ultimately brought the state to the brink of collapse. So, in 1826, Sultan Mahmud II annihilated this elite combat regiment, throwing the baby out with the bathwater by nullifying the Mehter organization, too. In its place, a modern military marching band was formed.

More than half a century later, Celal Esat Arseven, one of the major Turkish art historians of the period, reestablished the Mehterhane. The Mehter band, formed on the basis of research carried out by Ahmed Muhtar Pasha, the director of the military museum, performed its first concert since its disbandment in 1911. However, after the declaration of the Republic, the ensemble was abolished again as a reminder of the Ottoman period.

By 1952, then-President Celal Bayar had taken a shine to a Scottish historical band he saw in London. He told the chief of general staff that such a nostalgic marching band could be formed. Turkish art historian Ibrahim Hakkı Konyalı described the revival of the Mehter band while telling about the foundation of the Turkish military museum. “The artifacts of the military museum were floating in the waters of the flooded basement of the armory when I was commissioned to revive the establishment. A minister of National Defense named Zekai Bey abolished the Mehter band, so I went to Ankara, and after a long negotiation with Chief of General Staff Nuri Yamut, I convinced him to found a Mehter band and historical association. I founded the Mehter and the historical union in accordance with their original principles. The Mehter was given to Osman Bey by a Seljuk Sultan as a sign of independence at the time of the foundation of the Ottoman Empire. It is a symbol of independence," Konyalı said.

As a result of these favorable conditions formed in 1952, a Mehterhane was established within the Turkish Armed Forces (TSK). However, the lyrics of the anthems were censored. The names of the Ottoman sultans were removed and expressions reminiscent of the old era were removed. Despite this, however, it received great fascination from the public. In many cities, municipalities established their own Mehter bands.

The Mehter band, which is still in place today, has toured many countries around the world and performed concerts with the Red Army Choir in Russia. At the Istanbul Military Museum, concerts are held every day, except Monday and Tuesday, including weekends, taking the audience back to a time centuries ago.