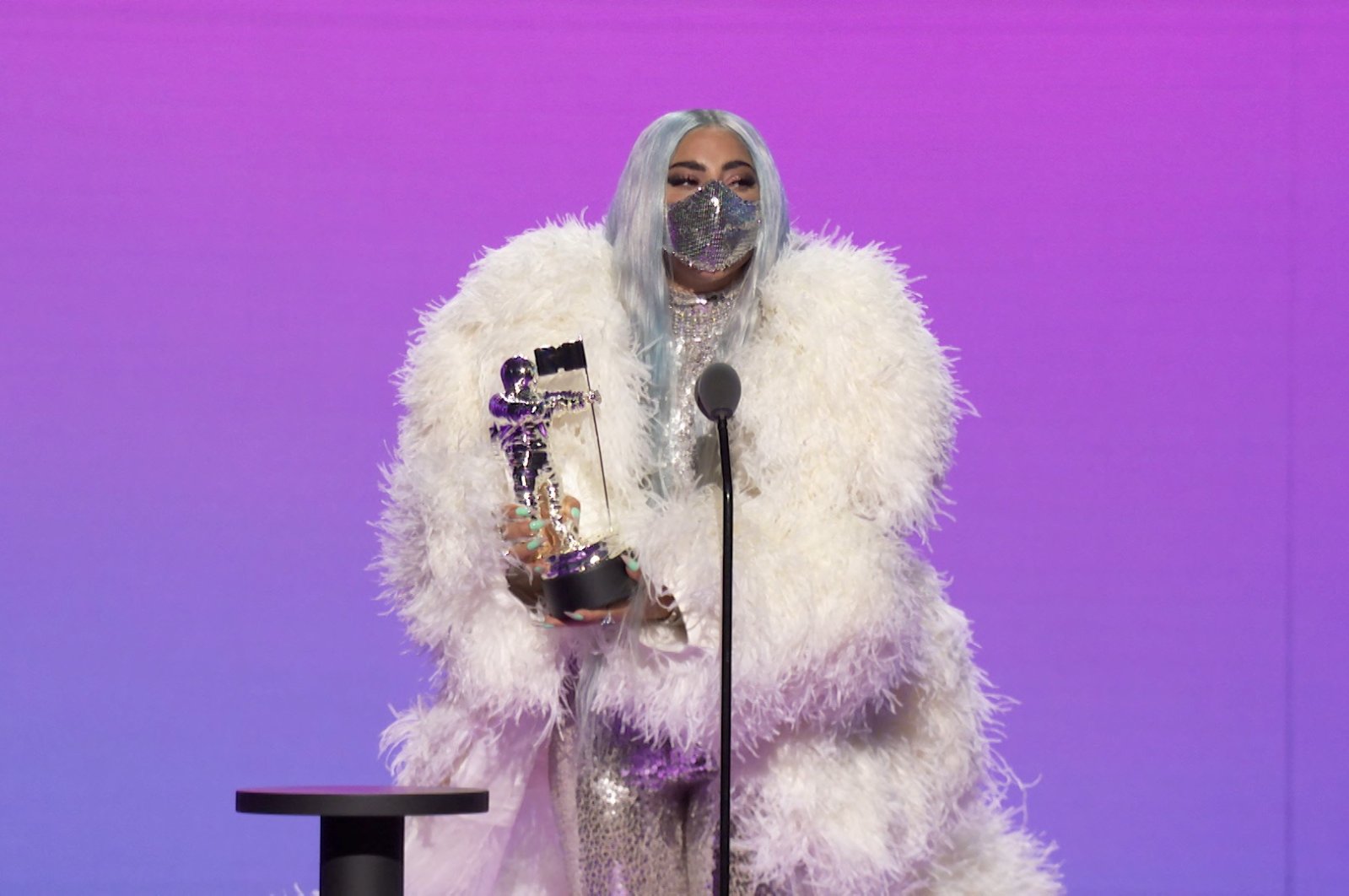 The MTV Video Music Awards got a little creative trying to put on a somewhat live awards show from New York City in the middle of a pandemic. Sunday's show included performances with mask-wearing artists and fans and artists dancing in front of the backdrop of the city's skyscrapers. But amid the celebration, the show also reflected the hardships of a tough year that has been marked by protests over systematic racism. Here are a few of the top moments from the show:

This year’s most fashionable accessory is the face mask, but the queen of over-the-top red carpet looks took it to another level at the VMAs.

Lady Gaga appeared in many different outfits and corresponding masks during Sunday night’s show while she dominated the night with a performance with Ariana Grande. Gaga donned a pink mask that strapped around head, a mask with pointy tusks and even an electronic display on a mask while she sang "Rain on Me" with Grande, who also sported her own black mask.

She was already racking up awards early in the evening before she took to the stage to perform a medley of her own songs. She held the award for artist of the year wearing a white tulle and organdy coat by Valentino and a matching silver mask. She managed to sound good singing and dancing while wearing a mask through multiple costume changes.

As if she hadn’t made the point already, the singer encouraged fans to "be kind, mask up," during a performance of "Stupid Love," then later added that wearing a mask is a sign of respect.

In between performances, backstage cameras caught many of the artists also sporting masks off stage as well.

When protests against racial injustice happening all across the country, artists at the VMAs used the platform to reflect how hard the year has been even as they came to celebrate achievements.

Host KeKe Palmer set the tone at the beginning by recognizing that strength comes amid struggle. She also dedicated the show to the late actor Chadwick Boseman, whose death from cancer at the age of 43 shocked many fans he earned for his portrayals of Black icons, including the Black Panther.

"With the Black Lives Matter movement, we’ve seen our generation step up, take to the streets and make sure our voices will be heard. Enough is enough," said Palmer, before mentioning the shooting of Jacob Blake in Kenosha, Wisconsin that has spawned nightly protests. “What we just witnessed in Kenosha, Wisconsin, is yet another devastating reminder that we can’t stop, that we can never tolerate police brutality or any injustice. We must continue the fight to end systematic racism.”

The Weeknd had the first performance of the night with "Blinding Lights" amid the skyscrapers of New York City. But he seemed heartbroken when he accepted two awards during the evening, including video of the year, saying it was hard to feel like celebrating, before asking for justice for Blake and Breonna Taylor, who was killed in Louisville.

H.E.R. won video for good for her song "I Can’t Breathe," which used footage from demonstrations as well as listing the names and faces of those whose deaths sparked thousands to take action against systematic racism.

Pop all-stars BTS, who won multiple awards including best pop and best group, threw it back to the disco nights of NYC with their first-ever performance at the VMAs.

With the debut of their English language song, "Dynamite," the seven band members showed off their impressive footwork while clad in wide-bottomed suits and ties in front of images of famous city landmarks like Times Square and the Brooklyn Bridge.

Their highly anticipated performance definitely lit up the night just like the song has been lighting up the charts. The group shouted out to their worldwide fans, the BTS Army, after winning the best pop award.