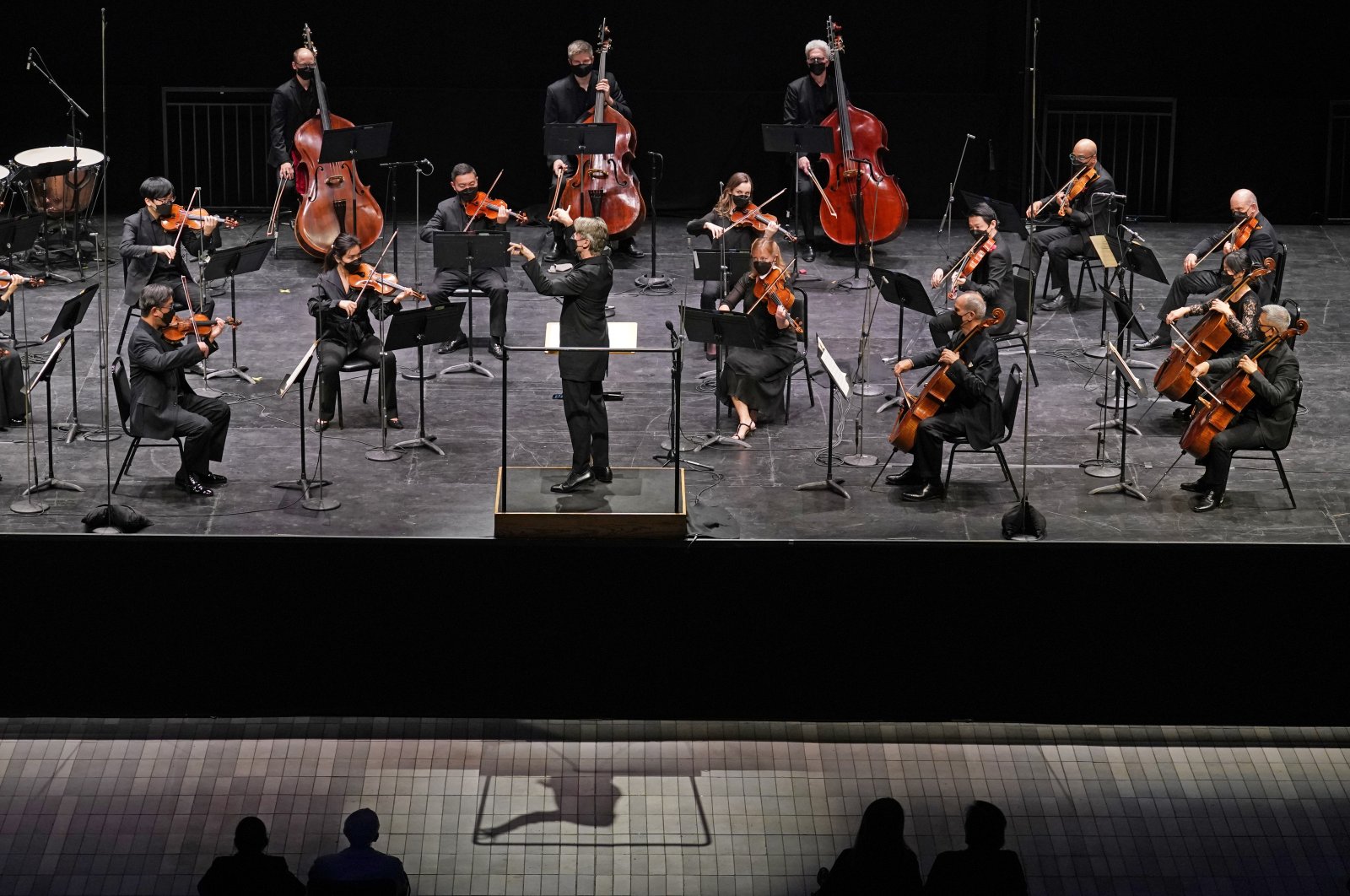 Finnish conductor Esa-Pekka Salonen took to the stage and told the crowd Wednesday night, "On behalf of all us on stage, welcome back. We have been dreaming of this moment for a long time." This was the first public performance of the New York Philharmonic, which had not gathered before an audience for exactly 400 days due to the coronavirus pandemic.

The philharmonic gave its very first concert after a historic hiatus of more than 13 months caused by the pandemic at The Shed in Brookfield Place, about 2 miles (about 3 kilometers) from its under-renovation Geffen Hall at Lincoln Center for the Performing Arts.

“I’m kind of on a euphoric high right now, because I missed it more than I realized,” concertmaster Frank Huang said afterward.

There was a reduced force of 23 strings, all masked, and no brass or woodwinds for a program that lasted one hour: Caroline Shaw’s “Entr’acte,” Jean Silbelius’ “Rakastava (The Lover)” and Richard Strauss’ “Metamorphosen.”

The cavernous The Shed, which opened in April 2019, had a masked audience of 150 spaced out in groups of one and two folding chairs, about 10 feet between each set, in a venue that usually seats about 1,200.

There were electronic tickets with timed entry, and temperatures were taken upon entry. Each person had to show proof of a negative COVID-19 test or proof of having completed vaccination at least 14 days earlier.

During the gap, many musicians taught. They had the benefit of continued but reduced salaries, a contrast to their Lincoln Center neighbor the Metropolitan Opera, which stopped pay for its unionized employees for long periods.

The last time the philharmonic had gathered before an audience was on March 10 last year for a night of Claude Debussy compositions with mezzo-soprano Isabel Leonard and conductor Louis Langree.

Since then, at most a handful of Philharmonic musicians had played together in public, at “Bandwagon” performances moved around the New York City area and as a quartet in Florida where there were less stringent COVID-19 regulations. There were also programs for digital release on NYPhil+ recorded at St. Bart’s Church and at Lincoln Center’s Alice Tully Hall with music director Jaap van Zweden.

The philharmonic hopes to resume regular subscription concerts in September, shifted to Tully and the Rose Theater at Lincoln Center Jazz until the Geffen reopens in September 2022. Its musicians will open the summer series of Picnic Performances in New York City’s Bryant Park with four nights starting June 9 and also hope to play in Vail, Colorado. The limited return is ahead of Broadway shows, which have talked about possibly resuming in September, and the Met, which will open Sept. 27 if it can reach new labor agreements.

Salonen, the 62-year-old music director of the San Francisco Symphony and principal conductor of London’s Philharmonia Orchestra, came in as a guest conductor and will repeat the program on Friday night.

“If there’s one thing we musicians have loved during these 14 months or so, it is that nothing – absolutely nothing – can replace the act and the ritual of a live concert,” he told the audience. “Music, of course, exists on many different levels: in written form using the complex system of symbols we call notation; as recordings on various mediums; or perhaps most importantly, in our memory and in our dreams. However, music can truly fulfill its original I dare say biological function as a powerful tool to convey deepest emotions and feelings only when performed here and now at this union point in time where music performers and the audience become one in a perfect symbiosis.”

Acoustics are difficult for an orchestra in The Shed, with its high ceiling creating the need for amplification. Players grinned as they saw the crowd, and some in the audience responded with a standing ovation.

“The three works we have chosen to play tonight all share a sense of moaning, nostalgia and loss elevated to something deeply and essentially human by sheer beauty,” Salonen said. “Of course, no single program can even begin to sum up our feelings and emotions after these months. Instead, we should see tonight’s concert as a new beginning, a signal for happier times ahead, filled with music and other things that give meaning to our existence in this troubled world.”