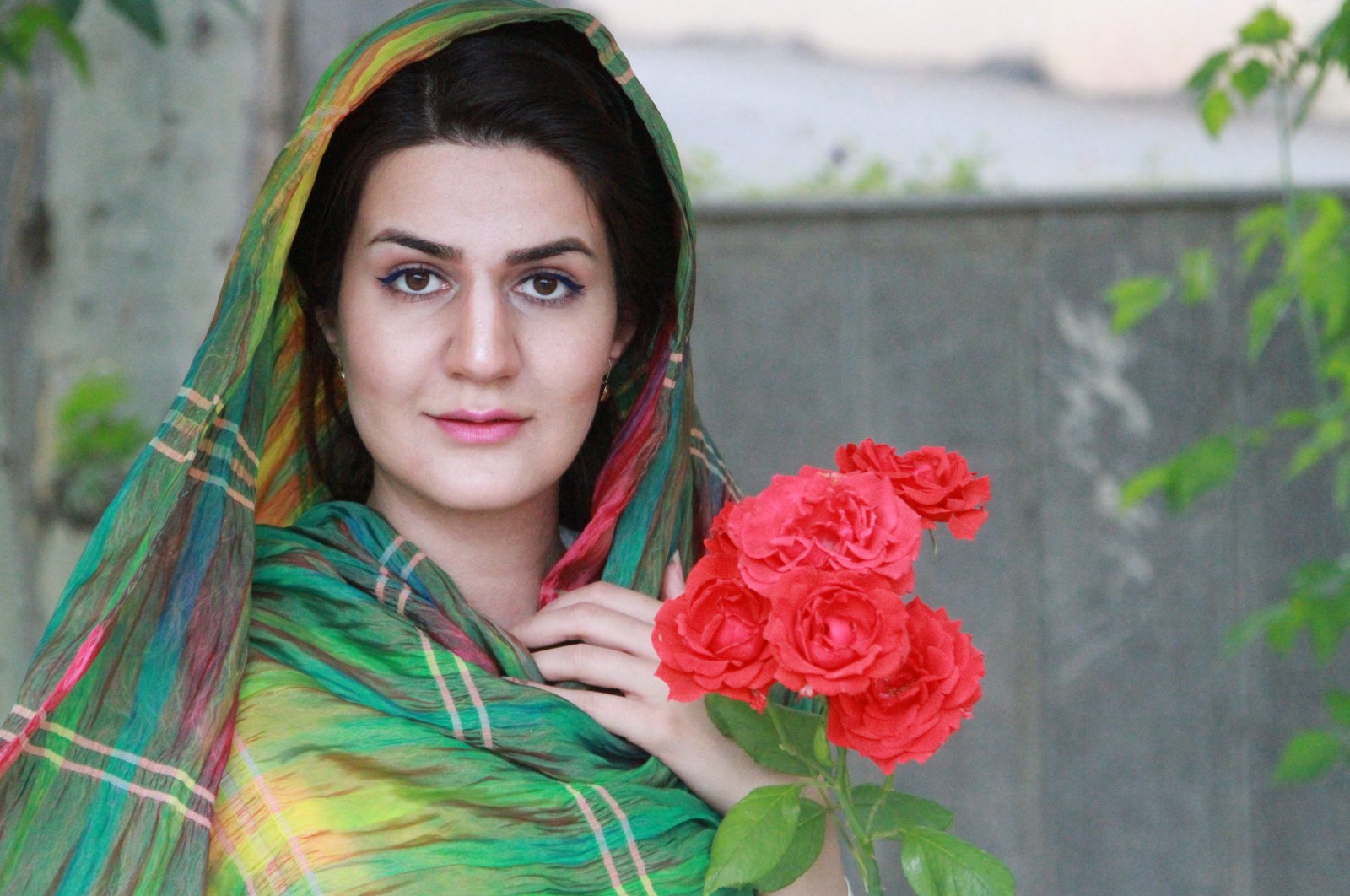 As the international community heals from the COVID-19 pandemic, Sahar Ajdamsani and artists from 11 countries are preparing to release a collaborative song titled "Quarantine World," which celebrates unity while trying to bring people together through the harmony of music

The world has been clawing its way back from the COVID-19 pandemic and taking stock recently as restrictions have started to ease with people getting vaccinated en masse. It has been a year-and-a-half rollercoaster ride and we have suffered many losses, which is the theme of Iranian music producer and director Sahar Ajdamsani's new project "Quarantine World." It explores the losses we have endured and the things we missed and provides a hopeful look at the future if we come together.

"Quarantine World" is an ambitious collaborative song between 11 nations, languages and artists that includes English, Persian, German, Kurdish, French, Arabic, Italian, Spanish, Russian, Hindi and Greek. The Persian is sung by Ajdamsani herself, who is also the lead lyricist.

The message they are all trying to convey with this great project is to help each other and to inspire empathy between fellow human beings in an effort to save the world through harmony.

I recently had the chance to sit down with Ajdamsani (albeit digitally) to see how such a hopeful international project to bring people together was conceived.

Ajdamsani is internationally recognized and she is one of the Iranian artists whose body of work has reached around the globe. She was the first Iranian to win the international WILDsound Poetry Festival in 2019 with her poem "Censorship," which focuses on women's rights.

"What was the thinking behind making it such an international song?" was my first question.

"I tried to include popular languages in the song in order to sympathize with people through popular artists and make people happy," Ajdamsani said. Her aim was to invite people to follow health protocols and help each other in destroying the coronavirus, and she believes that a wide range of artists would inspire people towards that goal.

People need to empathize and help "each other in these difficult times" so that we can "save the world as a whole," she said.

Each part, or rather verse, of the song is sung in a different language and so I was curious how they handled the decision on which parts would be sung by the different artists. "How did you decide which languages to include," I also asked Ajdamsani.

"I wrote the whole lyrics and all the languages myself," she said regarding whether each artist wrote their verses in their own language. "It's like a miracle, but I really did it."

She noted that the whole song took her only one day to write in September 2020.

"(Firstly) Persian, which is my mother tongue," she said as she explained how the songwriting process went. "I am fluent in English and German and I know a little Arabic. I wrote the lyrics for Arabic as well as seven other languages using grammar books and dictionaries of those languages. And the whole process took just one day."

Ajdamsani and the team are also planning a world concert tour for "Quarantine World," so I was keen to know if they were intending to visit all 11 countries whose languages were used in the song and if they had any more plans.

"Yes, it is true," she said regarding the plans for a tour. "I am really excited about it, especially since I have not had a concert since December 2019 due to the coronavirus outbreak and I miss concerts and the stage very much."

She confirmed that they were planning to travel to all the countries that were part of "Quarantine World" plus "a few other countries" if restrictions allow.

She said they are unable to hold a concert in India due to the high rate of COVID-19 cases in the country. "I wish from the bottom of my heart for India and its beloved people (to be in) a better situation there."

Ajdamsani also touched upon her home country, Iran, which has not yet eased restrictions on concerts and where singing in public is prohibited for women. "The possibility of holding a concert in Iran is completely ruled out," she said. "I hope that one day we will be able to hold a concert in our country like men and achieve our long-held dream."

This is not Ajdamsani's first international project as she has also composed poems for a music album called "Dreamy World," in collaboration with artists from 13 different countries. That project was supported by the United Nations and UNICEF.

"What makes these collaborative works appealing, and do you intend to create more such projects?" I asked.

She admitted that if she were to work on her projects alone they would be completed much faster and easier, within a week. "When it is done in this way with the participation of many artists from all over the world, it is done within a year," she said.

"Well, you know, managing and coordinating a lot of people from different parts of the world is really hard," she stated. "But I take this hardship because my goal and message of world unity, world peace and the revitalization of humanity and kindness and equality and love for all beings in the world, is more important to me."

"When popular artists from different countries are in the project, our voice is heard all over the world and has a greater impact," she said. "Yes, I plan to do other such international projects."

Then it was time for the big question that people whose languages were not be included in the song probably wondered. "Do you intend to add any more languages?"

"Not for this song," she said. "But for another project which I am working on it, I have added more languages. Because the 'Quarantine World' project was successful, I took a bigger step in the new project and added other languages."

Ajdamsani also gave a glimpse into this new song she was working on.

"The new project is a song and music video for world peace with the 16 most spoken languages in the world," she said. The languages include Turkish, English, Spanish, Persian, Arabic, German, Russian, Italian, Hindi, Greek, French, Kurdish, Dutch, Swedish, Chinese and Japanese.

It will also feature popular artists from their respective countries.

"(It) will be released on World Peace Day 2022," Ajdamsani stated as she noted that this was the first time she officially announced her new project, which she started only three months ago.

Ajdamsani has been interested in poetry since her early youth, and the themes of world peace, human rights, women's rights, kindness and humanity have always been woven through her lines.

"These themes are very important to me, of course. I have dealt with other themes, but my main focus is on these themes that you mentioned," she said.

"Unfortunately, the world is less kind right now. It's very important for me to be able to be effective with my artworks in inviting people to peace, equality, kindness, humanity, loving each other, the planet and the environment and animals, so that we can all have a better life."

She certainly has a great motto.

"This world will be created by us and with our hands."

Trying to look on the bright side, and with the positive effects quarantine has had on the environment in mind, I asked Ajdamsani if she saw any silver linings to have come out of the pandemic.

"Definitely, there (have been silver linings) for the environment, which is definitely beneficial," she said. "Also for people who know more about the value of life and its pleasures, however small. As well as the value of each other."

"Well, with quarantine, we were deprived of many of these things that we thought were not special, and we realized their value. Quarantine was really useful for me, it inspired and produced great ideas and projects," she added.

I wondered what she thought the world was going to look like once the pandemic is over.

"It will take time for the world to return to normal, but with the end of the COVID-19, the world will definitely be more beautiful, happier and more hopeful and smiling," she said. "And I hope it will be kinder."

Answering the question of what was the first thing she was going to do when the world was out of the pandemic, she said: "I want to go on an exciting leisure trip with my family and relax and have a good time. And then I want to go on a concert tour."

Ajdamsani thanked everyone that was part of the project as she finished the interview. "I want to say to them that this would not have been possible without your support, my dear ones," she said. "We are now really like a family."

"I would love to thank the prestigious Daily Sabah newspaper and also thanks to you for this great interview. And thank you to everyone who reads this interview. From here, I greet the kind people of Turkey and send them love."