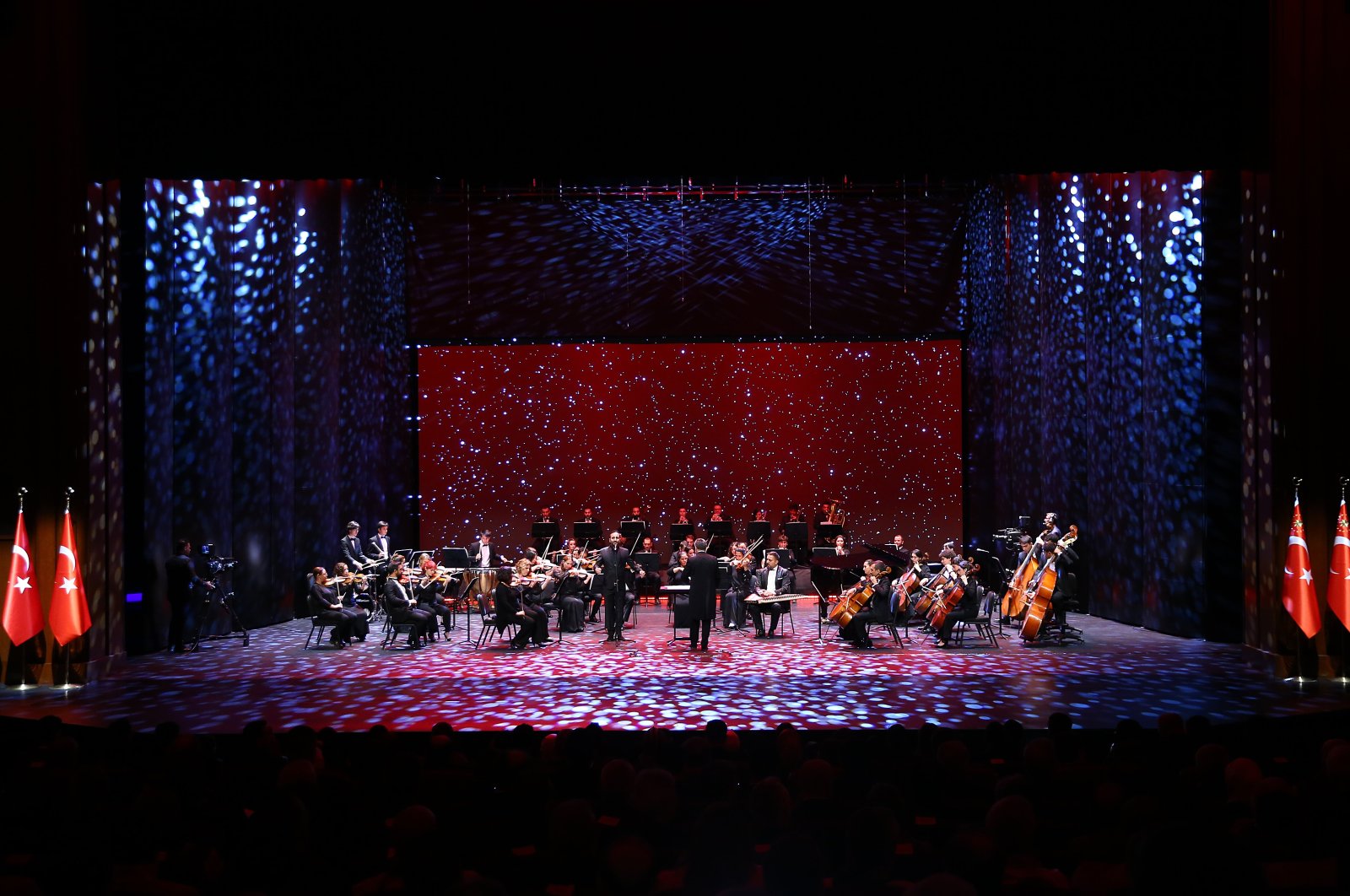 A symphony performance in the congress and culture hall of Presidential Complex in Ankara, Sept. 19, 2019. (AA Photo)
by Anadolu Agency Oct 10, 2020 3:50 pm
RECOMMENDED

Turkey's Presidential Symphony Orchestra (CSO) is making final preparations for the grand opening of its new concert hall in the capital Ankara – a majestic facility that has taken 25 years for completion.

Cemi Cem Deliorman, the orchestra's conductor, told Anadolu Agency that the architecture of the hall was "extraordinary" and the project came to fruition with the support of the culture and tourism minister.

"The hall will open on Oct. 29, the Republic Day of Turkey, when we will be hosting the Turkish president. There will be a second concert and other events on Oct. 30," said Deliorman.

"Global stars will be playing with us and we will have artists and groups from all around the world. We have commissioned a new piece that will be premiered at the concert. There will be celebrations spread over four days to mark the new facility's opening."

The complex includes a main hall with a capacity for 2,023 guests, a smaller hall that can accommodate 500 people and outdoor concert areas.

There are also multifunctional spaces such as an orchestra museum, library, archive room, and a gift shop.

"Rather than just a concert hall, it has been transformed into a place that lives throughout the day, produces art and inspires people," he said.

Deliorman compared the facility to the Leipzig Gewandhaus in Germany, saying that the idea at the start of the project was to have the best acoustics for a symphony hall in Turkey.

"The Leipzig Gewandhaus was taken as a role model, although our building is newer and bigger. Making such a building is an expensive endeavor. Every little detail is very special; the wood, the seats, and all other elements are specially made for the acoustics," he said.

Right notes for a new season

Deliorman, 35, the youngest conductor in the history of the (CSO), said more than two dozen young musicians have been selected after rigorous auditions.

"We are at a historic point in our orchestra's history," he said.

"We have added 30 young musicians to our group; from 78 musicians, we now have over 100, including people from all around the world. This makes us a young and a dynamic orchestra."

He said the new season's performances were prepared with well-known conductors from all over the world guiding the young musicians.

"There will be a concert tour from Turkey to Europe in July. The new season will feature works by Turkish composers, along with a repertoire of classical music, so there will be a balance for all.

"A music festival will be held in April. We have a rich tradition of composition here in Turkey. There are a lot of young composers who are not known; my goal will be to take their works to the world and commission them new pieces," he said.

Like all others, Deliorman said, the music industry has been unable to escape the effects of the coronavirus crisis.

"The pandemic has impacted the music industry hard and we are also fighting against it. Opera houses and music facilities were closed around the world. Music and arts, though, should go on," he said.

According to the conductor, virus restrictions and precautions will be strictly enforced at the new hall.

One of the key measures is that no more than 700 people will be allowed inside at a time in the over 2,000-capacity hall.

"Social distancing is a necessity and it will be followed. It will also be mandatory for everyone to wear masks. The artists, too, will be regularly tested for the virus," he explained.