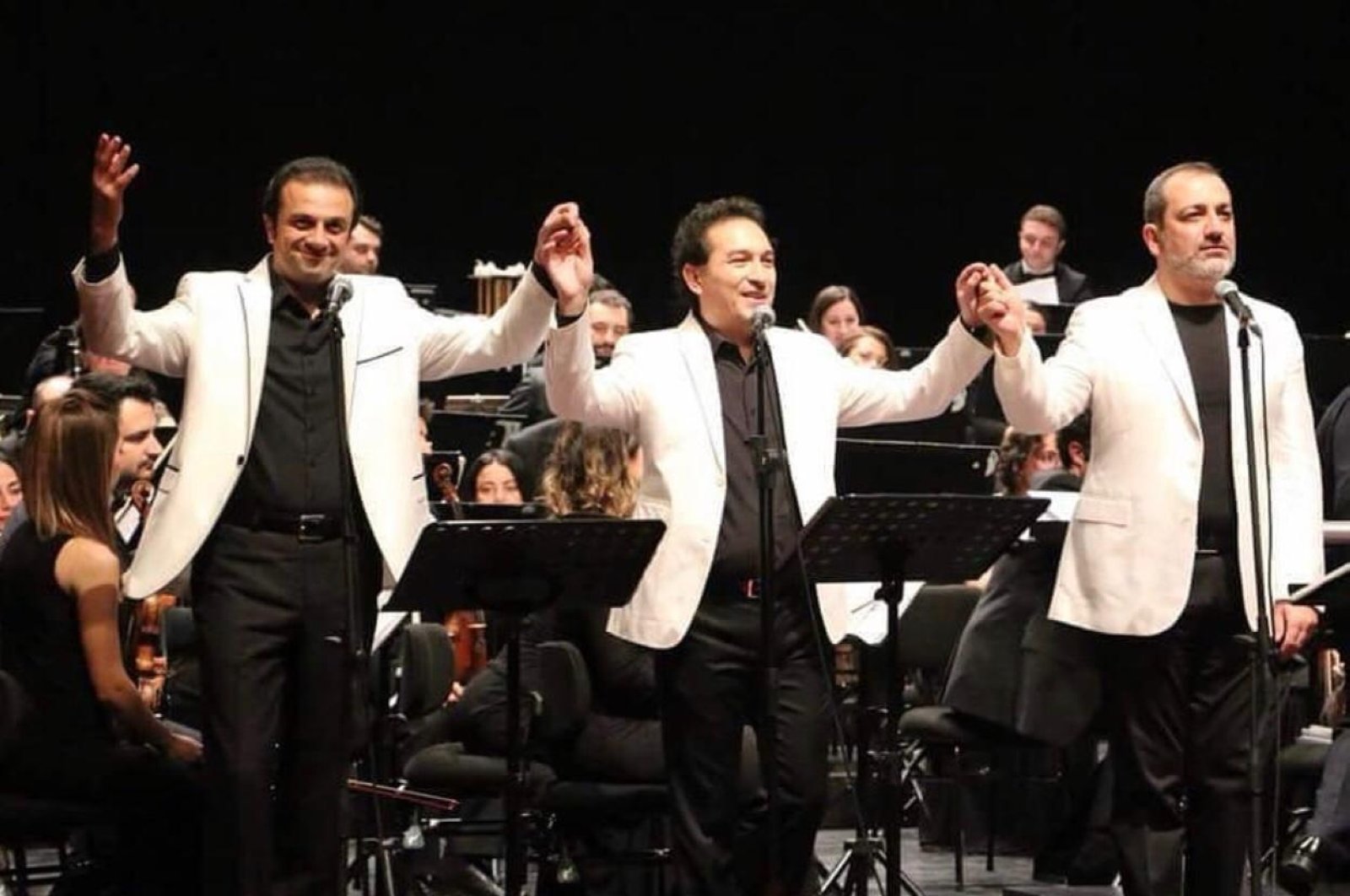 The Three Tenors band, founded 12 years ago to bring opera and polyphony to a broader audience in Turkey, and the Three Sopranos band, which performed their first concert 10 years ago, will bring their works together for art lovers both at home and abroad.

The Three Tenors band, consisting of Şenol Talınlı, Ayhan Uştuk and Aykut Çınar, who serve as soloists at the Ankara State Opera and Ballet (ADOB), performed their first concert on Sept. 28, 2008, at the ADOB Opening Concert under the baton of famous conductor Gürer Aykal.

Performing concerts together with the State Symphony Orchestras and Opera Orchestras under the direction of leading conductors such as Aykal, Rengim Gökmen, Antonio Pirolli, Naci Özgüç, İbrahim Yazıcı, Bujor Hoinic and Oğuzhan Balcı, the Three Tenors band has a wide repertoire ranging from classical to folk songs.

In addition to these concerts performed with big orchestras, the Three Tenors have performed concerts accompanied by small orchestras and pianos and appeared in many televised interviews and live concert broadcasts.

Working within the ADOB Directorate, the Three Tenors have performed a repertoire consisting of arias, Neapolitans, Azeri songs, tangos and folk songs in over 200 concerts so far. The ensemble aims to popularize opera and classical music by singing in polyphonic arrangements.

On the other hand, the Three Sopranos group, consisting of Turkey’s successful sopranos Funda Ateşoğlu, Çiğdem Önol and Esin Talınlı, also aim to popularize polyphonic music among children, young people and large audiences and to introduce the art of opera with their rich and unique repertoire.

The Three Sopranos band performed their first concert at the ADOB’s Gala Concert in 2010. Having been invited to many international meetings and festival openings so far, the Three Sopranos consist of singers who have been successful on both Turkish and world stages, each with a unique timbre.

Among the concerts where the ensemble has performed popular works from Turkey and across the world, the most important ones include the Aspendos Opera and Ballet Festival Promotion Concert, Three BasVoice Concert at the Sixth Phaselis Festival, the Wagner Festival Concert in the Kyrgyz capital of Bishkek; concerts held for Turkey's U.N. Security Council candidacy for temporary membership and relevant promotional activities, Aspendos Festival Promotion Concert, a concert with the Presidential Symphony Orchestra and Bülent Bezdüz in 2018 at Ankara Arena with 13,000 listeners, the concerts with the Three Tenors in Cyprus as well as in Eskişehir, Antalya and Bursa provinces and the concert they performed in Komotini, Greece in February 2019.

Having performed concerts in many cities, universities, festivals and aid organizations across Turkey, Ateşoğlu, Önol and Talınlı also continue their individual concerts at home and abroad, as well as serving as soloists at the Ankara State Opera and Ballet.

The Three Tenors and Three Sopranos continue to perform concerts as part of the program of the ADOB, organized in accordance with the hygiene and social distancing rules determined by the Ministry of Health due to the coronavirus outbreak and in a safe environment with a new audience seating and orchestra arrangement.

The Three Sopranos' next concert is scheduled for Thursday, Sept. 24 at 8 p.m. at the ADOB Stage, and the Three Tenors will perform next Wednesday, Sept. 30 at 8 p.m. on the same stage.