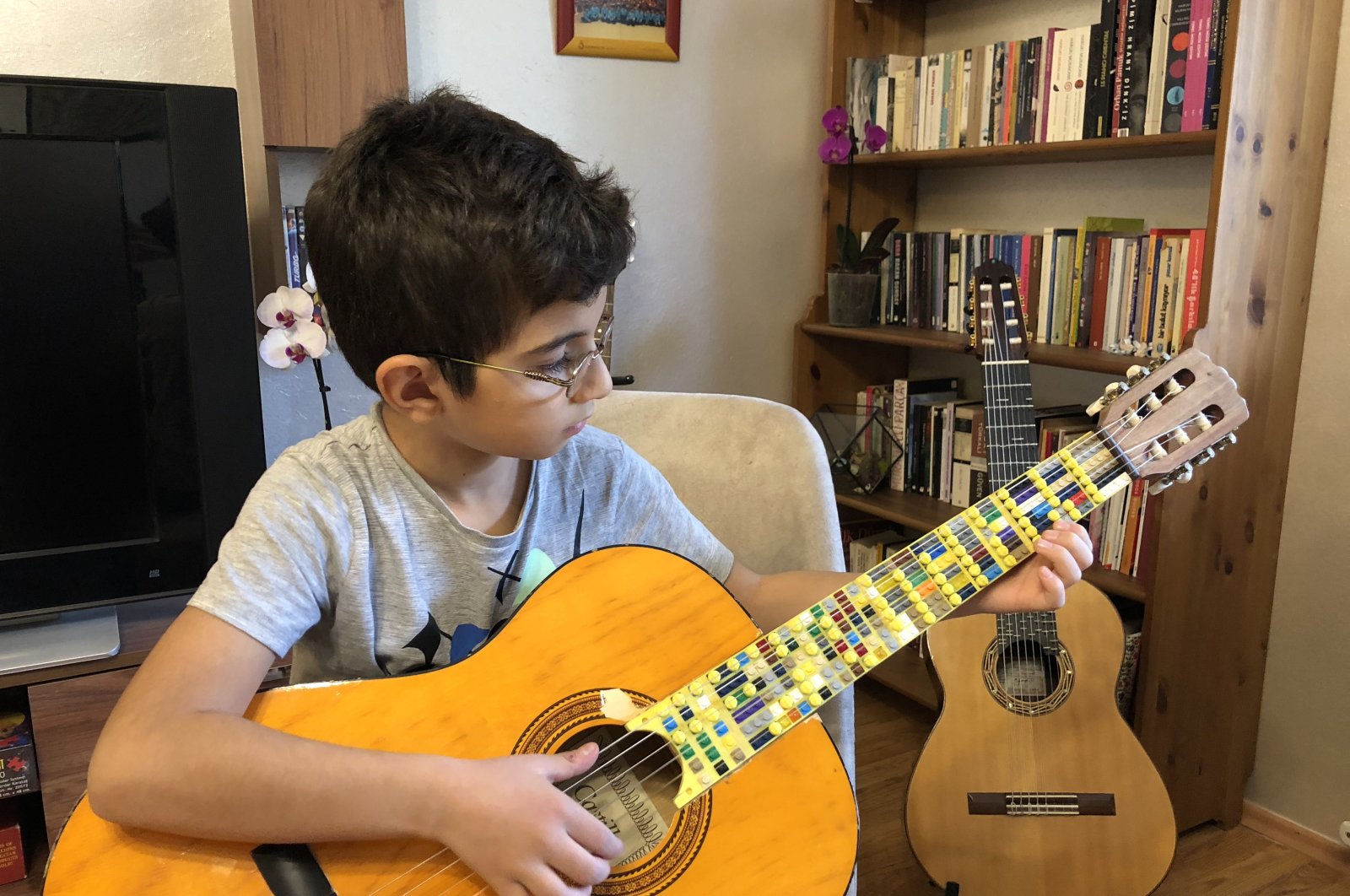 The wholly innovative instrument is the brainchild of Tolgahan Çoğulu and his son Atlas from Istanbul, who are devotees of microtonal traditions in world music. Among all playable Lego guitars in the world, it is the first one with a fretboard made out of the toy's blocks

The new Lego Microtonal Guitar, created by a Turkish father-son duo, was the recipient of top-notch accolades in the Guthman Musical Instrument Competition held earlier this month. Winner of the “People’s Choice” award and a finalist in the competition, Tolgahan and Atlas Çoğulu’s new musical invention is the first Lego guitar ever made to showcase an adjustable fretboard made entirely out of the children’s toy’s bricks.

News of musician and professor Tolgahan Çoğulu’s success in creating one of the most desirable and adorable instruments in the world has begun to pop up all over the globe. I found out about our fellow Turkish contestant’s success by reading about it in The New York Times, even though I have actually been following this musical genius – whose multifaceted talents include inventing, performing with and teaching with his own creation, which is the adjustable microtonal guitar and thus a world first.

While his newest Lego creation has become all the rage, this is actually not the first time that Çoğulu has invented an instrument. Yes, it’s true. Not only was he a finalist and the “People’s Choice” award winner in this year’s 2021 Guthman Musical Instrument Competition, but this is actually the second time he has come in first. His initial win was in 2014 for creating the abovementioned microtonal guitar, which he now teaches how to play at Istanbul Technical University's (ITÜ) Center for Advanced Music Studies (MIAM).

Considered to be the most prestigious competition when it comes to creativity, construction and musicality – the Guthman Musical Instrument Competition, which is organized by the Georgia Institute of Technology, awards the most technologically impressive instruments in the world. In most years, this comes in the form of a highly anticipated live awards show, but alas, during the time of coronavirus the competition was held online. A video depicting how the music professor and his son created the instrument garnered them the very prestigious “People’s Choice” award in the event and now the story of this coveted new instrument is being covered by the press all over the world.

Luckily, I had the chance to catch up with the musical genius upon hearing of the award win he shares with his 10-year-old son Atlas and his ITÜ doctoral student Ruşen Can Acet. As I mentioned, Çoğulu has had a long legacy with musical innovations, however, you may also know him as being the electric guitarist for the acclaimed multi-ethnic musical collective Kardeş Türküler, with which he performed from 2005 to 2007 in over 60 concerts. Kardeş Türküler itself was formed at the Boğaziçi University Folklore Club, which is also where Çoğulu said he decided to become a musician himself.

Originally hailing from the capital Ankara, Çoğulu came to Istanbul at the age of 6 and studied at Maçka Elementary School. Coincidentally, his education would take him to Boğaziçi University only to return to the building across from his original school as a professor at MIAM, where he has been inventing and teaching since 2001. Asking him what he teaches, Çoğulu said he now teaches both classical and microtonal guitar.

As mentioned earlier, this is not Çoğulu’s first time at the plate. In 2014, he was also the "Jury" and "People’s Choice" winner for the Guthman Musical Instruments Competition for his creation of an adjustable microtonal guitar, which allows for varied tunings and tones. As for how that guitar, which he actually first created back in 2008, became transformed into an award-winning Lego version, Çoğulu said that when his son Atlas was 7 he made a guitar fretboard out of Legos and asked his father to fit it onto a normal guitar. At first, he said, “I figured such an invention would have already existed, but when I wasn’t able to access any examples of such, I began to realize how valuable this finding may in fact be.” Çoğulu said he then shared the idea with Acet, a doctoral student at ITÜ, who together spent two years honing the project, which allows for all Lego pieces to be easily detachable, adjustable and interchangeable on top of a guitar fretboard. What this means in practice is that the invention allows for all of the microtonal sounds inherent in Turkish maqam music, which is generally played on instruments such as the bağlama and tanbur, to now be playable on a guitar. Acet and Çoğulu used 3D technology for their Lego pieces on the fretboard, and they were supported in this process by Selçuk Keser at the Öğrenenler Workshop in Istanbul.

Lego and music fans can rejoice as thankfully, creating the Çoğulu’s miraculous Lego guitar is actually accessible to everyone as the team now has an account on Patreon where in exchange for a small donation, the 3D files for the Lego guitar can be all yours. They have also begun constructing the guitars for sale themselves and have so far sent one to the famous American guitarist Kaki King, who also served on the jury at this year’s competition. A Lego guitar also now belongs to Swedish YouTuber Lucas Brar, while yet another YouTuber and instrument creator, Simon the Magpie, has also created a bass guitar version of Çoğulu’s invention.

Being the connoisseur of adjustable microtonal guitars, Çoğulu’s ITÜ has also opened the world’s first microtonal guitar department under his tutelage. In addition to recording four full-length albums – including one named “Atlas” after his son and partner in the venture, who at the age of 10 has also become a skilled musician and inventor in his own right – Çoğulu is getting ready to release his newest album this April. To be released by Ahenk Music, this album will be the first for this duo, which includes esteemed bağlama player Sinan Ayyıldız. In May, Çoğulu will also have a single released entitled “Köyde Sabah” (“Morning in the Village”), which will feature his microtonal guitar stylings. In the past, Çoğulu’s albums have been released by esteemed music producers including Kalan music, which has single-handedly contributed to the proliferation of multiethnic Turkish music. An album Çoğulu contributed to in 2016, which is a recording of Willian Allaudin Mathieu’s three-movement "Lattice-Işi," was even released in the U.S. by Cold Mountain Music in 2016.

In a normal world, Çoğulu would have been performing all over it, with concerts planned in Spain, Switzerland and Austria that were all postponed until 2021, and now some even possibly to the year 2022. “Of course, we miss the pre-COVID-19 era, as we used to perform at least twice a month. This is the first time there has ever been an interruption,” Çoğulu said.

You can check out the video making the rounds in the world press, which details how the award-winning Microtonal Lego Guitar came about and catch a glimpse of the talented father-son duo and team that made it all possible. And when I say “all possible,” I mean making playing Turkish music’s classical maqam sequences possible for the first time ever on a guitar and thus allowing for the melding of Eastern and Western musical elements and making such instruments easily accessible to anyone in the world.