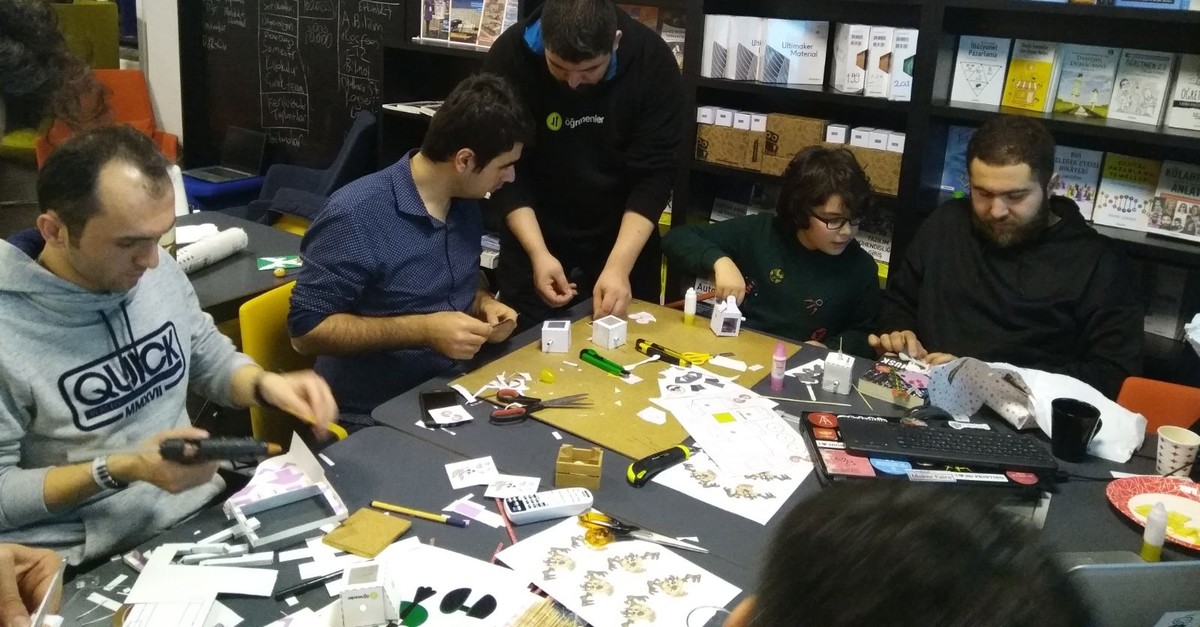 Young participants attending a class where they can produce rather than consume.
by İREM YAŞAR Mar 11, 2019 9:06 am

Contemporary maker culture has become widespread throughout the world, with more people now aware of it. Where does Turkey stand in this culture? Let's learn from Selçuk Keser, the founder of the maker platform Öğrenenler (Learners)

All of us have heard that we live in a consumption society at some point in our lives. From TV ads to billboards, many things have a part in making us feel the urge to buy something. The more we buy, the more satisfied we feel. The reason for this situation is that we gain an identity from these consumptive activities instead of our productions. However, don't you think that we need to say stop to this? While technology develops day by day, why wouldn't we use it to produce something, rather than consume?

In this point, the maker movement has come about as a culture that should be explored. Maker basically means somebody that makes something out of everything. The aim of the movement is to do and repair something yourself instead of buying it or throwing it out. The mindset of the movement, which also provides benefits to the economy, has existed for ages among the hobbyists and arts/crafts groups. However, I learned that the release of the American Make magazine gave the movement driving power in 2005.

While this culture has been spreading around the world, Turkey is no exception. In order to receive more information about this movement in Turkey, Daily Sabah conducted an interview with Selçuk Keser, the founder of "Öğrenenler" ("learners" in English), a transdisciplinary platform which transforms the maker culture to the people.

Keser is the first individual to give a lecture on the maker movement in Turkey. After graduating from Gaziantep University's Mechanical Engineering Department, he got his master's degree from the Materials and Manufacturing Department of Istanbul Technical University (İTÜ). He still studies sociology at the open education program. 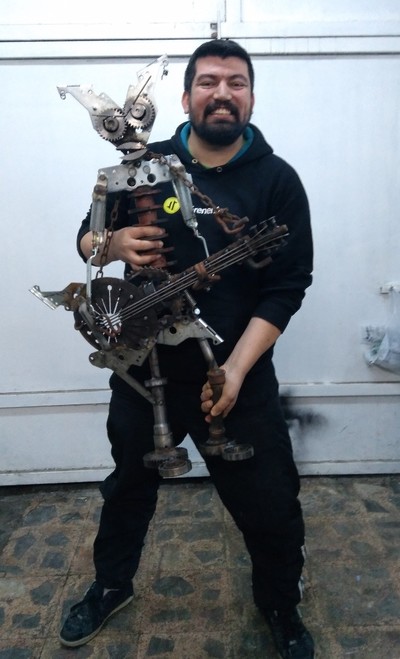 Selçuk Keser, the founder of "Öğrenenler," a transdisciplinary platform which transmits the maker culture to the people.

During our interview, Keser noted that he always chose the department that he would study according to what he did not know. This was surprising for me as we generally determine our departments in line with our abilities. However, what is more surprising was the study culture in Keser's neighborhood, where he spent his childhood. He said that children in the neighborhood were teaching each other, that is, younger children were under the tutelage of older students. While the third-grade students were dealing with first grader lessons, the fourth graders were responsible for the second-grade students. The order went like this. He said that he had difficulty in studying at university as he was used to studying with this kind of culture in his neighborhood. Keser said that recreated something similar at university. He was good at a class on manufacturing and found 12 other students who were not good in this class but excelled in other areas. They taught each other the subjects that each of them were good at, and thus all managed to succeed in different areas.

Keser founded the Öğrenenler platform because of the impact this study group culture had on him. The platform was created nearly three years ago in order to teach certain disciplines to individuals within the context of the maker movement. After teaching these disciplines, the platform creates teams and groups from individuals who share the same interests and ability. Then, the transdisciplinary part steps in, and these people come together around a common purpose like to create a product, build a consultancy, etc. Keser's platform provides training in nearly every subject, including 3D design, graphics, animation, augmented reality, coding, digital marketing, processing, web design, software, game developing along with other disciplines such as toy making, modern music, art history and photography. Keser stressed that he has 12 "no-founders," at the platform. These "no-founders" are responsible for 12 groups in the platform and provide training workshops. They work with Keser on every detail of the platform.

Keser implied that it is important to know the maker movement in detail as the first step in order to understand their work better. He explained that there are three words used to describe this job: Thinker-Maker-Creator.

While thinker means someone who recognizes a problem and thinks about a solution for it, the maker is someone that makes what he/she sees. Stating that the work of makers is copying something, Keser mentioned that creators are the ones who then create an idea and turn it into something. "I can say that we have the Turkish equivalent of everything, such as 3D printing and virtual reality (VR), but we need more creators who can produce what has not been done," he added.

Giving detailed information on the maker movement, Keser said that it has three stages: "Zero-to-Maker," "Maker-to-Maker" and "Maker-to-Market." In the stage of Zero-to-Maker, individuals learn different disciplines from the bottom up. The second stage, Maker-to-Maker is the part where individuals share what they have learned with each other. Indeed, it is the stage of learning by teaching. The last stage, Maker-to-Market is the marketing part of what the individuals produce. Keser said that this product may be something material but it also may be something like a consultancy service or a schedule even.

As the founder of such a platform, Selçuk Keser also teaches primary and secondary school students. He said that these students are at the stage of Zero-to-Maker. They are learning robotics, coding and software. He aims to instill the maker culture in the younger generation, he said that they will be experts by the next year and will teach each other. In their third year, they will contribute to their schedule or have things for competitions.

Keser is an individual who has made an effort to spread this culture in Turkey. He thinks that there should be more maker organizations in the country. He said that Maker Faire, which is a festival of invention, creativity and resourcefulness and a celebration of the maker movement, was held as a mini fair previously. He told us that these mini fairs should continue as they reach more people. He recommended that they may be organized with specific concepts like wood, iron or VR. For example, a wood fair can be organized for enthusiasts, and people can learn how to produce and see new technologies in this way.

Going back to their platform's journey, Keser said that they started their training as free but then added a price to it. The reason for it was that they need to get materials for their training. Keser also noted that people do not, unfortunately, show enough interest in free training.

This year, Öğrenenler will expand abroad. Keser and his team plan to contribute to education tourism by hosting foreigners with their training. For example, they will first discuss the wing mechanism of the 17th-century Ottoman aviator Hezarfen Ahmed Çelebi and then provide training on drones. They will make models of the Galata Tower in 3D design and print. During the week-long training, foreign attendees will both learn maker culture and also Turkish culture, and will be treated to three Turkish meals as well.