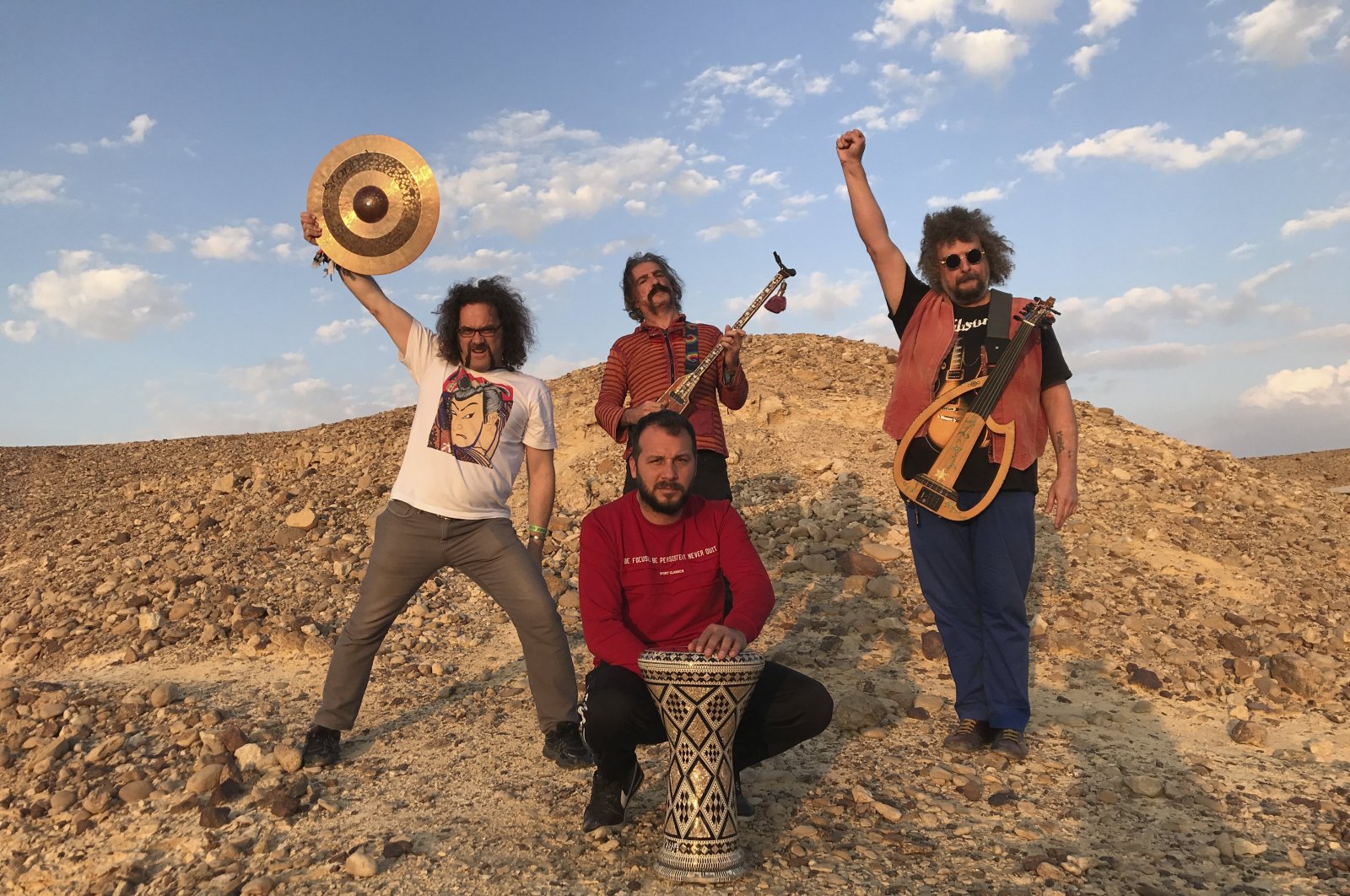 BaBa Zula combines Turkish culture with their music, posture and costumes on the stage on Sept. 7. (Courtesy of IKSV)
by DAILY SABAH Aug 12, 2020 12:20 pm
Edited By Irem Yaşar

Organized by the Istanbul Foundation for Culture and Arts (IKSV) for 23 years with the sponsorship of Garanti BBVA and with the support of the Ministry of Culture and Tourism, the Istanbul Jazz Festival will this year connect with music lovers in a new style Sept. 2-14. The 27th edition, which was postponed due to the coronavirus, will host artists both at Istanbul's favorite open-air venues and on its online platform.

The decision to hold the Istanbul Jazz Festival despite the challenging conditions this year was made to support musicians and music industry workers and to ensure the continuity of cultural events during this difficult time. The concerts and online screenings underscore that cultural and artistic life is an indispensable part of living and that the reunion of artists and their audience is aimed at encouraging creative production.

The choice to keep the festival going is also important for corporate sustainability in the field of culture and the arts, and the organizers want their audience to take this occasion to support both artists and music industry laborers during this unique period.

The Istanbul Jazz Festival's open-air concerts will take place between Sept. 2 and Sept. 14 and it will be possible to watch the performances online two days later with a ticket. Digital concerts will be accessible anywhere in the world for 45 days until Oct. 16.

The name of the online platform and other details will be shared later on the festival's website.

The “Showcase for Contemporary Music from Turkey” will also take place Sept. 7-9, its fourth time as part of the festival. The program was launched to enable successful musicians and ensembles from the local scene to reach a wider audience, and eight concerts will be held over the three-day period. Along with regular fans, managers of the world’s other leading festivals will also follow along and so many international music professionals, especially in Europe, will have the opportunity to get to know bands from Turkey.

The 27th Istanbul Jazz Festival will grant Lifetime Achievement Awards to two important figures known for their valuable contributions to jazz music in Turkey, esteemed musician Atakan Ünüvar, who adopted music as a lifestyle, and Barbaros Erköse, the world-renowned clarinetist. Due to COVID-19 measures, this year’s Lifetime Achievement Awards will be presented without ceremony, following health rules.

The 27th Istanbul Jazz Festival has a busy schedule to offer full of performances by talented musicians. You can find some of these concerts below or see a more detailed version of the program on the festival's website.

A team of Turkey's most acclaimed jazz musicians is inviting you to relax both your body and soul during an open-air concert. Each member of the quintet, led by Selen Gülün, is a star in their field. The group includes Barış Doğan Yazıcı, Serhan Erkol, Kağan Yıldız and Ferit Odman. Moreover, the team will be accompanied on stage by two other important figures, Sibel Köse and Ece Göksu, who are among the most important jazz vocalists in Turkey. Although social distancing will be observed, this event will bring jazz fans closer to one another, and it is a step toward traditionalizing the “Turkish Jazz Through Generations” night that took place two years ago.

The Selen Gülün Quintet featuring Sibel Köse & Ece Göksu will perform at Sultan Park across from Swissotel The Bosphorus in Beşiktaş at 9:30 p.m. on Sept. 2.

While returning home from his studio in the evening of a sad day, Can Güngör asked himself, “I will not die alone, will I?" whereupon he recorded the song “Yalnız Ölmek” (“Dying Alone”) that he had written and uploaded it to the internet. Many adaptations of it were made, and it was circulated by word of mouth.

The career of Güngör, dubbed the “urban bard” by critics, has progressed rapidly. The musician released his 15-track album this year, attracting attention with his calm, exuberant and uncanny tones. “It embodies the effort to reach many different musical points as songwriting, form, arrangement and orchestration,” he says about his album. He also displays this effort on stage, often performing new versions of his songs at times. You can listen to the stories of the “urban bard” in the outdoor garden of the Swissotel The Bosphorus at 9:30 p.m. on Sept. 3.

You cannot guess where things will lead when they get on stage. We are talking about BaBa Zula, whose performances uniquely reflect Turkish culture with their music, posture and costumes. During their concerts, for example, Ümit Adakale drums a darbuka, and Levent Akman plays spoons as Murat Ertel lifts his saz to the sky and sings, while Periklis Tsoukalas strums an oud on his knees. That is what makes their show so special: They have fun first.

The band of 20 years will add color to the festival with their repertoire of favorite tracks from their latest release “Derin Derin” (“Deeply”) and previous albums. The festival audience should note that the group has not performed for a long time, so its energy and excitement will be very high!

Another team to take part in the night is Make Mama Proud, who describes their scene as “digging, shoveling and wrecking.” Inspired by garage, stoner, desert rock and blues, the band's musical range is extensive. Baba Zula and Make Mama Proud will be performing as part of the “Showcase for Contemporary Music from Turkey” at Feriye in Beşiktaş at 8 p.m. on Sept. 7.

This year's final night of “Showcase for Contemporary Music from Turkey” is dedicated to domestic electronic timbres. The scene at Feriye, resting its back on the Bosporus, is entrusted to Guguou, Tuğçe Şenoğul and Islandman. Guguou, who began his musical life in 2017 when he was invited to Sao Paulo Biennale by artist Güneş Terkol, enriches popular sounds with electronic tones.

Tuğçe Şenoğul, who started her career with the bands “Seni Görmem İmkânsız” and “Kahinar,” starring dark synths, is another guest of the night. In her solo career, she combines the dark melodies she inherited from her previous bands with original lyrics and powerful vocals.

The night will end with musician and producer Tolga Böyük’s independent project “Islandman.” Having proven their talent in dance music and opening up to the world with their first single “Ağıt” (“Mourning”), the ensemble combines shamanic sounds with electronic. The performance is scheduled for 6:30 p.m. on Sept. 9, at Feriye.

MANOUCHE A LA TURCA, led by Bilal Karaman, one of the best guitarists and composers of his generation, will be on stage at this colorful concert. The ensemble blends French Gypsy jazz with familiar melodies and is highly appreciated. Karaman will be accompanied on stage by Muhammed Yıldırır, who was named the globe's fastest violinist by Guinness World Records, in addition to Ramazan Sesler, a clarinet master like his father, Özgün Bora, who has produced many unique works in a number of genres, and Baran Say, a favorite of festivals for his acoustic and double bass skills.

The concert will start with neoclassical composer and pianist Büşra Kayıkçı and the audience feel the multidisciplinary work habits she learned as an interior architect with melodies from her piano. The night will start calmly and end with rapturous sounds at the Istanbul Open-Air Performance Center in the Kuruçeşme neighborhood at 8 p.m. on Sept. 11.

Jülide Özçelik, a musician who has never broken away from the sounds of the lands she grew up in but presents these melodies in universal standards, will be on stage with her album “Nefes” (“Breath”), which she describes as “a place where people will find peace and calm down.” Özçelik will be performing folk songs with her own unique style and will be accompanied by Cem Tuncer, Ediz Hafızoğlu, Efecan Tuncer and Ercüment Orkut, popular artists of the local music scene.

Another guest of the night is pianist Bilge Günaydın, who offers a vibrant journey to music lovers with her own compositions and arrangements. In honor of her debut album, “Daydreams,” the pianist will take listeners away from the fast flow of life and open the doors of her subjective world through melodies. The musical adventure will start at the Esma Sultan Mansion in the Ortaköy neighborhood at 8 p.m. on Sept. 14.

For the 18th time, Young Jazz concerts will be held as part of the Istanbul Jazz Festival. Musicians selected from group and solo projects from an assessment held at Salon IKSV on July 11 and July 12 are Afroloji, An Quartet, Büşra Kayıkçı, Deli Bakkal, Saynur Eren Quartet and Udgang Trio. The chosen ensembles and solo artists will meet audiences at various public green spaces in Istanbul as part of the “Jazz in Parks” performances of the festival. A detailed program of the Young Jazz concerts will be disclosed soon.